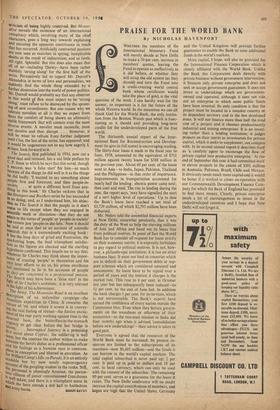 PRAISE FOR THE WORLD BANK

By NICHOLAS DAVENPORT The thirteenth annual report of the Inter- national Bank for Reconstruction and Develop- ment (to give its full name) is encouraging reading. The thirty-four loans it made in the fiscal year to June, 1958, amounted to the equivalent of $711 million against twenty loans for $388 million in the previous year. About 60 per cent. of the loans went to Asia—to India, Japan, Pakistan, Thailand and the Philippines—in that order of importance. Improvements in transportation accounted for nearly half the lending : electric power came next; then coal and steel. The rise in lending during the year, the report says, 'may have signalled the start of a new higher level of operations.' Up to date the Bank's loans have reached a net total of $3,729 million, of which $2,795 million have been disbursed.

Mr. Nehru told the assembled financial experts at New Delhi, somewhat petulantly, that it was theduty of the West to help the starving millions of Asia and Africa and hand out its loans free from political motives. In point of fact the World Bank has to consider all requests for loans strictly on their economic merits; it is expressly forbidden to pay regard to political motives. It is not, how- ever, a philanthropic institution; it is run on strict business lines. It must not lend to countries which are in default on their government debts or sup- port schemes which are considered unsound and uneconomic. Its loans have to be repaid over a period of years and the interest it charges is the market rate. This rose to 6 per cent. in October last year but has subsequently been reduced—to 5* per cent. by the end of June last. In addition the bank charges 1 per cent. for its services, which is not unreasonable. The Bank's experts have earned the confidence of every nation outside the Communist bloc. Even when they lecture govern- ments on the soundness or otherwise of their economics—as the two-man mission to India did four months ago when it advised 'consolidation before new undertakings'—their advice is taken in good part.

Everyone is agreed that the resources of the World Bank must be increased. Its present re- sources are limited to the subscriptions of its members—now $9,405 million—and the funds it can borrow in the world's capital markets. The total capital subscribed is never paid up; 2 per cent. is' paid up in gold or dollars and 18 per cent. in local currency, which can only be used with the consent of the subscriber. The remaining 80 per cent. serves as a guarantee for the loans it raises. The New Delhi conference will no doubt increase the capital contributions of members, and hopes are high that the United States, Germany

and the United Kingdom will provide further guarantees to enable the Bank to raise additional funds in the world's markets.

More capital, I hope, will also be provided for the International Finance Corporation which is closely affiliated with the World . Bank. Unlike the Bank this Corporation deals directly with private business without government intervention; it finances only private enterprise and does not seek or accept government guarantees. It does not invest in undertakings which are government- owned and operated, although it does not rule out an enterprise in which some public funds have been invested. Its only condition is that the project must be located in a member country or its dependent territory and in the less developed areas. It will not finance more than half the total cost of a project and it chooses predominantly industrial and mining enterprises. It is an invest- ing rather than a lending institution; it judges projects on their merits as investments for private capital, which it seeks to supplement, not compete with. In its second annual report it describes itself as 'a catalytic agent to encourage the flow of private capital into productive enterprise.' At the end of September this year it had committed itself to eleven projects to the extent of $101 million in Australia, Pakistan, Brazil, Chile and Mexico. It obviously needs much more capital and it would be better if it worked in closer co-operation with our Commonwealth Development Finance Com- pany for which the Bank of England has promised to find more money. Clearly, private enterprise needs a lot of encouragement to invest in the underdeveloped countries and I hope that New' Delhi will not forget it.