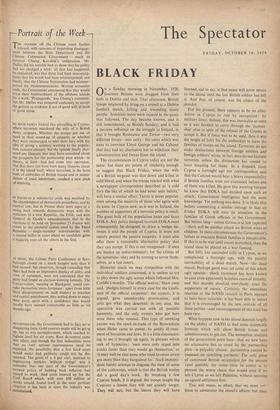 THE TENSION off the Chinese coast further relaxed, with rumours of impending disengage- ment between the State Department and the Chinese Communist Government — much to General Chiang Kai-shek's indignation. Mr. Dulles did his notable best to show that his policy had not changed a whit : all that had happened, he explained, was that there had been misconcep- tions; that his words had been misinterpreted; and finally, that the Chinese Nationalists had misinter- preted the misinterpretations. Waving semantics aside, the Communists announced that they would cease their bombardment of the offshore islands for a week. Propaganda,' was Chiang's comment; but Mr. Dulles was prepared cautiously to accept the gesture as evidence if not of good will, at -least of good sense.

NO SUCH SANITY looked like prevailing in Cyprus, where terrorists murdered the wife of a British Army sergeant. Whether the troops got out of hand in their round-up of suspects, or whether they were encouraged to vent their fury with the idea of giving a salutary warning to the popula- tion, remains obscure; but the episode finally shat- tered any illusions that may have remained about the prospects for the partnership plan which—in theory, at least—had just come into operation. Not that there can have been many illusions about It in the island itself, where terrorism, in the form both of ambushes of British troops and of intimi- dation of local inhabitants, reached a new pitch of intensity.

IN PAKISTAN a ministerial crisis was resolved by the abandonment of democratic procedures, and by martial law; but in France there were signs of a swing back towards democratic ways with the Initiation of a new Republic, the Fifth; and with General de Gaulle's announcement. that in the elections to be held on November 23 France will revert to the electoral system used by the Third Republic — single-member constituencies with a second ballot in cases where no candidate gains a majority over all the others in the first.

AT HOME, the Labour Party Conference at Scar- borough closed on a much happier note than it had opened; but observers, though conceding that there had been an impressive display of unity, and even of optimism, were not convinced that the party had found an election-winning formula. The Conservatives, meeting at Blackpool, could con- sider themselves more fortunate : apart from little local disagreements on such matters as taxation and capital punishment, they settled down to enjoy their party spirit with a confidence that would hardly have seemed conceivable as little as six months ago. * NEVERTHELESS, the Government had to face some disquieting (acts. Gold reserves might still be goim up, but so was unemployment, which reached its highest level for six years. Rent de-control came into effect, and though the first indications were that no very serious repercussions need be expected, the possibility that a few hard cases would make bad publicity could not be dis- counted. The grant of a 4 per cent. increase to engineering workers 'without strings' was a reminder that one part of the Government's avowed policy of holding back inflation had ceased to work. And crisis loomed up for the Coal Board which, with over £60 million of stocks unsold, found itself in the most perilous situation it has been in since the industry was nationalised.