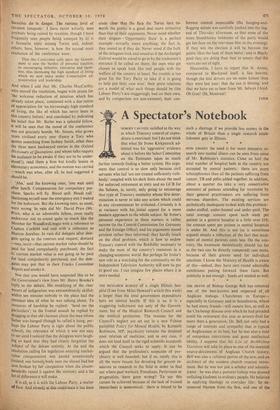 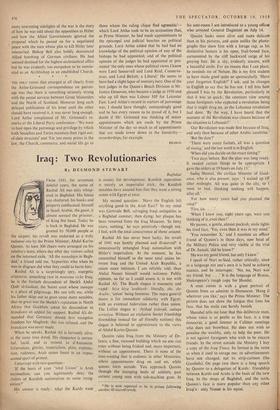 THE DEATH of Bishop George Bell has removed one of

the best-known and respected of . all Anglican bishops. Churchmen in Europe— especially in Germany and in Scandinavia, where he had many friends—will mourn him, as well as the Chichester diocese over which he had presided (until his retirement this year at seventy-five) for more than a generation. Dr. Bell not only had a range of interests and sympathy that is typical of Anglicanism at its best, but he was also a man of outspoken convictions and great intellectual ability. I suppose that his Life of Archbishop Davidson will take its place as one of the essential source-documents of Anglican Church history. Bell was also a cultured patron of the arts, and an architect of the modern church reunion move- ment. But he was not just a scholar and adminis- trator : he was also a pastoral bishop who showed unfailing kindness to ordinary people. He believed in applying theology to everyday life : he de- nounced Nazism from the first, and one of the more interesting sidelights of the war is the story of how he was told about the opposition to Hitler and how the Allied Governments ignored the proposal which he passed on for a negotiated peace with the men whose plot to kill Hitler later miscarried. Bishop Bell also boldly denounced Allied bombing of German civilians. He had seemed destined for the highest ecclesiastical office but he was evidently too outspoken to be nomin- ated as an Archbishop in an established Church.