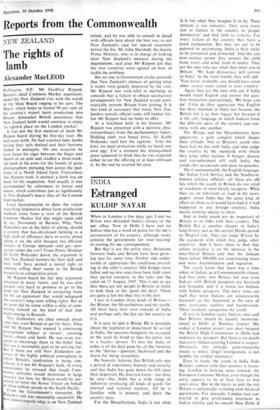 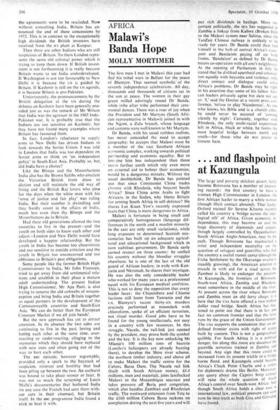 When in London a few days ago. I met no Briton who defended India's closure of the BBC office. Now in Delhi I have met no Indian who has a word of praise for the BBC's presentation of his country, although many criticise the government for 'over-reacting' in ousting the BBC correspondent.

But that is not the entire story. Relations between India and Britain have been grow- ing taut for some time. Neither side under- stands or appreciates the conditions prevail- ing in the other's country. Old bridges have fallen and no new ones have been built since they parted company as the ruler and the ruled on 15 August, 1947. This is not to say that there are not people in Britain or India to look back to the 'good old days'. There are quite a few but they live in the past.

I met in London three kinds of Britons— the Blimps, the Mountbattens and the youth. All three have their own concept of India and perhaps only the last see the country as it is.

It is easy to spot a Blimp. He is nostalgic about the regiment or department he served in India, the spacious bungalow he occupied or the ayah he hired to take his junior out in a bughee (pram). To him the India of today is of the days gone by, of the 'twenties or the 'thirties—ignorant, backward and the worse for being masterless.

He honestly believes that British rule was a period of orderliness, honesty and security and that India has gone down the hill since their departure. He does not know—nor does he care—that India has a wide range of industries producing all kinds of goods for internal and external markets. All he is familiar with is poverty and there the country stays.

For the MountbaUens, India is not what it is but what they imagine it to be. Their attitude is too romantic. They view every riot or famine in the country in 'proper perspective' and find little to criticise. For every failure of the country they have a stock explanation. But they are apt to be paternal or patronising. India is their child, to be pampered and protected. And like any over-zealous parent they protect the child from every cold wind, even of reality. They are the ones who say when they meet you in Britain : 'We hope democracy will survive in India'. In the same breath, they will add: 'You know, probably you should have some other system more suited to your country'. Again they are the ones who ask if India would retain English and answer the ques- tion themselves patronisingly, 'We hope you do'. Little do they appreciate that English has been retained in India not because the British left it as their legacy but because it is the only language in which Indians from the different parts of the country can con- verse with one another.

The Blimps and the Mountbattens have apparently a guilt complex which shapes their attitude. Not so Britain's youth who have had no ties with India and who judge the country by the standards with which they judge other nations. If hunger, disease and unemployment still stalk India, the youth offer no excuses and spare no punches. The Commonwealth, the English language, the Indian Civil Service and the Sandhurst- trained military officials—all these are old ties which the youth in Britain do not extol or condemn, or even barely recognise. What they see on television or read in the news- papers about India has the same kind of effect on them as it would have had if it had happened in any foreign country; India means nothing special to them.

And in India youth are no respecters of Britain or its links with their country. The British Raj is another chapter in India's long history just as the ancient Hindu period or Moghul rule. They too judge Britain by the standards with which they judge other countries. And it hurts them to find that colour prejudice is on the increase in the once-liberal Britain and that the Indians there (about 300,000) are experiencing more and more discrimination and segration.

The youth know that there was a time when an Indian, as a Commonwealth citizen, had free entry into Britain but now even Indians with British passports are harassed and hounded, and it is worse for Indians with Indian passports. The entry rules are such that some Indians are unnecessarily harassed—as has happened in the case of MPS, musicians, authors and businessmen. These incidents antagonise the youth.

(I met in London many Indians who said that Britons should be equally inconveni- enced at Delhi or Bombay airport. My ordeal at London airport was short because the British High Commission in Delhi had endorsed my passport. But there is no doubt that every Indian entering London is suspect. Obviously, this attitude, understandably meant to detect illegal immikration, is not healthy for cordial relations.) Even in trade, the youth in India finds Britain's contact with their country is lessen- ing. London is looking more towards the European Common Market. even though the entry appears to be at least four to five years away. But in the hurry to join the EEC –Britain is unilaterally violating even bilateral agreements. For example, London had con- tracted to give preferential treatment to Indian textiles and to consult New Delhi if

thee agreements were to be rescinded. Now without consulting India, Britain has an- nounced the end of these concessions by 1972. This is in contrast to the exceptionally high dividends the British investors have received from the la plant at Kanpur.

Then there are other Indians who are still suspicious of Britain. To them London repre- sents the same old colonial power which is trying to keep them down. lf British invest- ment is not forthcoming it is really because Britain wants to see India underdeveloped. If Washington is not too favourable to New Delhi it is because the us is guided by Britain. If Kashmir is still on the tni agenda, it is because Britain is pro-Pakistan.

Unfortunately, the pronouncements by the British delegation at the UN during the debates on Kashmir have been generally one- sided just as was the remark of Mr Wilson that India was the agressor in the 1965 Indo- Pakistan war. It is probably true that the Indians are too sensitive on Kashmir, but they have not found many examples where Britain has favoured them.

In fact, London's reluctance to supply arms to New Delhi has driven Indians to look towards the Soviet Union. I was told in London that India was too dependent on Soviet arms to think on 'an independent policy' in South-East Asia. Probably so, but did India have a choice?

Like the Blimps and the Mountbattens India also has the Brown Sahibs who emulate the Victorian British from dress to diction and still maintain the old way of living and the British Raj lovers who pin. for the days when the white man with his 'sense of justice and fair play' was ruling India. But their number is dwindling and they hardly count in the affairs of India, much less even than the Blimps and the Mountbattens do in Britain.

Had these old generations allowed the two countries to live in the present—and the youth on both sides to know each other and adjust—London and New Delhi would have developed a happier relationship. But the youth in India has become too chauvinistic and too sensitive to outside criticism and the youth in Britain too unconcerned and too oblivious to Britain's past obligations.

Some people like the former British High Commissioner to India, Mr John Freeman, tried to get away from old sentimental rela- tions and establish in their place a mature adult understanding. The present Indian High Commissioner, Mr Apa Pant, is also trying to remove the old cobwebs of miscon- ception and bring India and Britain together as equal partners in the development of the Commonwealth countries and South-East Asia. 'We can do better than the European Common Market if we all join hands'.

But the new approach has yet to attract attention. In its absence the two sides are continuing to live in the past, loving and hating each other at the same time, over- reacting or under-reacting, clinging to the memories which they should have replaced with new ones and often going out of the way to hurt each other.

The BBC episode, however regrettable, provided only a spark to the haystack of suspicion, mistrust and hostility that had been piling up between the two. An outburst was bound to take place sooner or later. It was not so much the screening of Louis Malle's documentaries that bothered India (in any case the French had seen them with- out cuts in. their cinemas), but Britain itself. In the BBC programme India found a stick to beat it with.