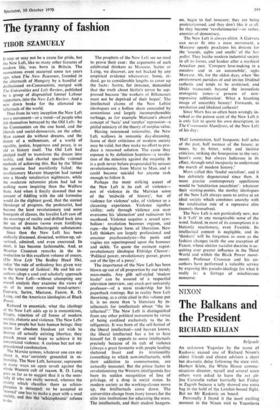 The tyranny of fashion

It may or may not be a cause for pride, but the New Left, like so many other features of modern life, was born in Britain. The momentous event occurred some ten years ago, when The New Reasoner, founded in the aftermath of Hungary by a handful of disillusioned ex-Communists, merged with The Universities and Left Review, published by a group of disgruntled former Labour supporters, into the New Left Review. And a new dawn broke for the alienated in- tellectuals of the world. Thus from its very inception the New Left was a movement—or a trend—of people who felt themselves betrayed by the Old Left: by the Communists on the one hand, and the liberals and social-democrats, on the other. Man cannot do without dreams, and the dream of a millennium, of a world of equality, justice, happiness and peace, is as old as history itself. The Old Left had pledged itself to transform the dream into reality, and had- charted specific rational methods of achieving this. But by the 'fifties the promise had manifestly failed; the revolutionary Marxist blueprint had turned into a bloody totalitarian nightmare, while the moderate reformist plans had led to nothing more inspiring than the Welfare State. And when it finally dawned that no amount of fiddling with the old formulae would do the slightest good, that the storied Demiurge of progress, the proletariat, had become the least revolutionary and most bourgeois of classes, the loyalist Left cast off the moorings of reality and drifted back into the sea of dreams (some even fortifying themselves with hallucinogenic substances).

Since then the New Left has been endlessly discussed, dissected, written-up, ad- vertised, admired, and even execrated. In short, it has become fashionable. And, as Maurice Cranston remarks in the in- troduction to this excellent volume of essays, (The New Left The Bodley Head 30s), today 'the rule of orthodoxy has given way to the tyranny of fashion'. He and his co- authors adopt a cool and scholarly approach to the New Left—without attempting any overall analysis they examine the views of six of its most renowned trend-setters: Guevara, Sartre, Marcuse, Fanon, R. D. Laing, and the American ideologists of Black Power.

Reduced to essentials, what the ideology of the New Left adds up to is romanticism, Utopia, rejection of all forms of modern society, rhetoric and violence. The New Left- ists love people but hate human beings; they yearn for absolute freedom yet wish to destroy all actually existing liberties; they preach peace and hope to achieve it by unrestricted violence. A curious but not un- precedented combination. The Marxist system, whatever one can say about it, was 'certainly grounded in ra- tionality. The New Left, however, represents in many ways an open revolt against the whole Western cult of reason. R. D. Laing goes so far as to suggest that it is the men- tally ill who are really normal, whereas the society which classifies them as schizo- Phrenics is deranged; to be accepted as 'normal' one has to make a pact with a mad s°cietY, and this the 'schizophrenic' refuses • to do.

The prophets of the New Left see no need to prove their case: the arguments of such celebrated thinkers as Marcuse. Sartre or Laing, we discover, are not backed by any empirical evidence whatsoever. Some, in- deed, go to considerable lengths to cover up the facts : Sartre, for instance, demanded that the truth about Stalin's terror be sup- pressed because 'the workers of Billancourt must not be deprived of their hopes'. The intellectual claims of the New Leftist ideologues are a hollow sham concealed by. sententious and largely incomprehensible verbiage, as for example Marcuse's absurd concept of 'basic' and 'surplus' repression—a pitiful mimicry of the theory of surplus value.

Having renounced rationality, the New Left wallows in romantic day-dreaming. Some of their criticisms of modern society may be valid, but they make no effort to pro- duce a reasoned solution. The cause they espouse is by definition hopeless—a revolu- tion of the minority against the majority. It is a path never before propounded by serious revolutionaries, from Marat to Mao, and it could become suicidal for anyone rash enough to follow it.

Perhaps the most striking aspect of the New Left is its cult of violence— not of violence in the Marxian sense of the 'midwife of history', but of violence for violence' sake, of violence as a cleansing experience. Violence signifies virility; only through violence can man overcome his 'alienation' and rediscover his manhood. Violence acquires a sexual sym- bolism: revolution becomes orgasm, and rape—the highest form of liberation. New Left thinkers are largely professional and amateur psychoanalysts—the penis and vagina are superimposed upon the hammer and sickle. To quote the eminent rapist- revolutionary ideologue Eldridge Cleaver: 'Political power, revolutionary power, grows out of the lips of a pussy'.

The importance of the New Left has been blown up out of all proportion by our trendy mass-media. Any glib self-styled 'student leader' can be assured of a respectful television interview, any crack-pot university professor—of a mass readership for his paperback rantings. But in reality New Left theorising, as a critic cited in this volume put it, is no more than 'a literature by in- tellectuals for intellectuals about "the in- tellectual"? The New Left is distinguished from any other political movement by virtue of being confined exclusively to the in- telligentsia. It was born of the self-hatred of the liberal intellectual—and heaven knows, the liberal intellectual has a lot to hate himself for. It appeals to some intellectuals precisely because of its cult of violence (always a great favourite with people leading sheltered lives) and its irrationality (something to which non-intellectuals, with their addiction _to commonsense, are naturally immune). But the prime factor in revolutionising the Western intelligentsia has been its sudden recognition of loss of privilege, of a drop in social status. In modern society as the working-classes move up, the intellectuals come down. The universities change from ivory towers for the elite into institutions for educating the mass. The intellectuals, and their student hangers- on, begin to feel insecure; they are being proletarianised, and they don't like it at all. So they become 'revolutionaries'—or rather, enemies of democracy.

The New Left is always elitist. A Guevara can never fit into a mass movement, a Marcuse openly proclaims his distaste for the 'sounds, sights and smells' of the hoy polloi. They loathe modern industrial society in all its forms, and hanker after a mythical Arcadian past. 'Compare love-making in a meadow and in an automobile', sighs Marcuse. Aft, for the olden days, when 'the environment partakes of and invites libidinal cathexis and tends to be eroticised, and libido transcends beyond the immediate erotogenic zones—a process of non- repressive sublimation'. What a haunting image of unearthly beauty! Forwards, to revolution and libidinal cathexis!

Since Marx has so often been wrongly in- voked as the patron saint of the New Left it is only fair to quote his own description, in The Communist Manifesto, of the New Left of his day:

'Half lamentation, half lampoon; half echo of the past, half menace of the future; at times, by its bitter, witty and incisive criticism, striking the bourgeoisie to the very heart's core; but always ludicrous in its effect, through total incapacity to understand the march of modern history.'

Marx called this 'feudal socialism', and it has definitely degenerated since then. A more precise contemporary appellation would be 'totalitarian anarchism': whatever their starting-points, the motley ideologues of the New Left always seem to arrive at an ideal society which combines anarchy with the totalitarian rule of a repressive elite (namely themselves).

The New Left is not particularly new, nor is it 'Left' in any recognisable sense of the word. Indeed, in most of its assumptions it is blatantly reactionary, even Fascistic. Its intellectual content is negligible, and its 'thinkers' will be forgotten as soon as the fashion changes (with the one exception of Fanon, whose sinister racialist doctrine is ac- quiring ever greater influence in the Third World and within the Black Power move- ment). Professor Cranston and his co- authors have performed a valuable service by exposing this pseudo-ideology for what it really is: a farrago of mischievous nonsense.