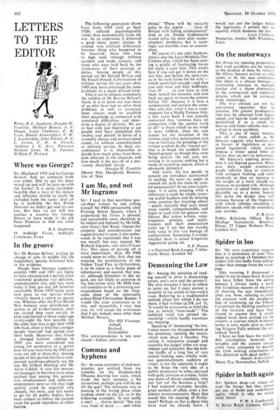 Sir: Among the penalties of read- ing oneself in print is discovering errors, one's own and the printer's. My own mistakes I leave to others to point up, but I must correct a misprint in my article in last week's issue. Referring to a traditionalist attitude about law which I do not share, I had written (p.358, col. 1), 'It would be demeaning to label the law as merely "man-made".' The italicised word was printed `de- manding'—which hardly translates my meaning.

Speaking of 'demeaning' the law, I must report my disappointment at the ceremony opening the courts, which took place 1 October. The setting is impressive enough and certainly the judges' robes are mag- nificent and colourful. But the halt- ing shuffle of a long line of very mortal looking men, wholly with- out accompaniment, auditory or visual, is not the spectacle it ought to be. Since the very idea of a public procession in robes adorned with gold, crimson or ermine, belies any claim of chaste simplicity, why not 'tart up' the business a little? I had expected trumpets, heralds, great symbols of office, even a few solemn pronouncements. Does that sound like the opening of Parlia- ment? Perhaps so, but as those who have read me already know. I would not put the judges below the legislators. I protest this in- equality which demeans the law.