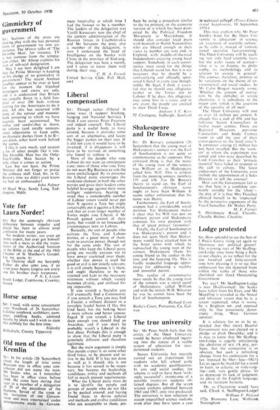 Sir: How splendid to see the Sun of 5 Powis Grove rising yet again to illuminate our political gloom! The warming rays of Mr Skcffing- ton-Lodge once more bring a flush to our checks. as we reflect for the one hundred and forty-seventh time how pleasing it is to see that enthusiasm has not departed from within the ranks of those who cherished our (late) Outstanding Government.

Yet stay! Mr Skeffington-Lodge is now Disillusioned: the Scales have fallen from his Eyes, and Mr Maudling is revealed as the 'brutal and inhuman' tyrant that he is, a tyrant supported, what is worse, by a Brighton MP. and opposed only by that tenaciously demo- cratic thing, 'West German opinion'.

It is salutary for us to be re- minded that Our (new) Hateful Government was not elected on a pledge to ditch Dutschke; and it is nice to know that Mr Skeffing- ton-Lodge is eagerly anticipating the abolition of sEr. (A pity, per- haps, that the connection is so obscure. but such a refreshing change from his enthusiasm for a tax imposed by Our—late—OG !) Let us again be thankful for a mind so keen. so eclectic, so wide-rang- ing—and, very gently please. let us deprecate its lack of Judgment, its abuse of the English language, and its incipient hysteria.

Or. as Chesterton would have said. Chuck it. Skeffington-Lodge! William F. Pickard 172a Bramcote Lane, Wollaton, Nottingham