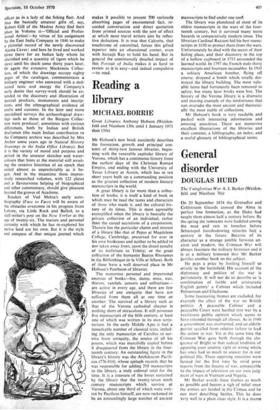 Great Libraries Anthony Hobson (Weiden- feld and Nicolson 130s until 1 January 1971 then 150s) Mr Hobson's new book succinctly describes the formation, growth and principal con- tents of thirty-two famous libraries, begin- ning with the venerable capitular library of Verona, which has a continuous history from the earliest days of the Christian Roman Empire, and ending with the University of Texas Library at Austin, which has in ten short years built up a commanding position as the greatest collection of modern literary manuscripts in the world.

A great library is far more than a collec- tion of books; it is itself a kind of book in which may be read the tastes and characters of those who made it, and the cultural his- tory of its times. This is most agreeably exemplified when the library is basically the private collection of an individual, rather than the casual accretions of a corporation. Therein lies the particular charm and interest of a library like that of Pepys at Magdalene College, Cambridge, preserved for ever in his own bookcases and neither to be added to nor taken away from, upon the dread penalty of its forfeiture, to Trinity; or the great collection of the humanist Beatus Rhenanus in the Bibliotheque de la Vile at Selasat. Both of these have a well deserved place in Mr Hobson's Pantheon of libraries.

The numerous personal and impersonal enemies of books—fire, damp, mice, war, thieves, vandals, censors and utilitarians— are active in every age, and there are few libraries of any antiquity that have not suffered from them all at one time or another. The survival of a library such as that of the Verona cathedral chapter is nothing short of miraculous. It still possesses five manuscripts of the fifth century, at least one of which was written in its own scrip- torium. In the early Middle Ages it had a remarkable number of classical texts, includ- ing the only manuscript of Catullus to sur- vive from antiquity, the source of all his poems, which was mercifully Copied before it disappeared from the library in the four- teenth century. An outstanding figure in the library's history was the Archdeacon Pacifi- cus„ (776-844), whose epitaph records that he was responsible for adding 218 manuscripts to the library, a truly colossal total for the time. It is a measure of the losses sustained by the library that the twenty-seven ninth century manuscripts which survive at Verona, about one third of which were writ- ten by Pacificus himself, are now reckoned to be an astoundingly large number of ancient

manuscripts to find under one roof.

The library was plundered of most of its oldest manuscripts in the wars of the four- teenth century, but it survived many more hazards in comparatively modern times. The librarian Cardinal Rezzani hid his best manu- scripts in 1630 to protect them from the wars. Unfortunately he died with the secret of their hiding place, and their discovery in the top of a hollow cupboard in 1713 astounded the learned world. In 1797 the French stole thirty manuscripts and fourteen incunables. In 1945 a solitary American bomber, flying off course, dropped a bomb which totally des- troyed the library building. The most valu- able items had fortunately been removed to safety, but many later books were lost. The history of the Verona library is a dramatic and moving example of the misfortunes that can overtake the most ancient and theoretic- ally the most stable of collections.

Mr Hobson's book is very readable and packed with interesting information and amusing anecdotes. There are numerous excellent illustrations of the libraries and their contents, a bibliography, an index, and a useful glossary of bibliographical terms.