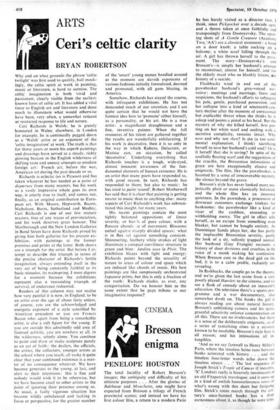 Why and on what grounds the phrase `celtic twilight' was first used to qualify, half mock- ipgly, the celtic spirit at work in painting, music or literature, is hard to surmise. The celtic imagination is both vivid and passionate, clearly visible rrom the earliest- known form of celtic art. It has added a vital force to English art and literature and done much to illuminate what would otherwise have been, very often, a somewhat reticent or restricted response to life and nature.

Ceri Richards is Welsh; he is greatly honoured in Wales; elsewhere, in London for example, he is continually pegged down as a 'Welsh' artist or an exponent of the `celtic imagination' at work. The truth is that for thirty years or more his superb paintings and drawings have served as a steady, richly glowing beacon in the English wilderness of shifting taste and uneasy attempts to emulate foreign art : French art, before the war, American art during the past decade or so.

Richards is eclectic (so is Picasso) and has taken whatever he has needed as a point of departure from many masters, but his work as a vastly impressive whole goes its own way, is utterly true to itself, and comes out, finally, as an original contribution to Euro- pean art. With Moore, Hepworth, Bacon, Nicholson, Burra, Sutherland and Medley, Ceri Richards is one of our few mature masters, free of any traces of provincialism, and his work deserves great honour. The Marlborough and the New London Galleries in Bond Street have done Richards proud by giving him both galleries for his present ex- hibition, with paintings at the former premises and prints at the latter. Both shows are a triumph for the artist. But before I at- tempt to describe this triumph in terms of the precise character of Richards's fertile imagination, always extending itself in the very act of being constantly faithful to its basic stimulus, its mainspring. I must digress for a moment because the exhibitions represent also a resounding triumph of survival, of endurance redeemed.

Readers of this column may not realise how very painful it is now, in England, to be an artist over the age of about forty unless, of course, you are the acknowledged and energetic exponent of a style sanctified by American precedent or you are Francis Bacon who, apart from being a remarkable artist, is also a cult figure for the young. If you are outside this admittedly odd area of licensed activity, you are nowhere at all, in the wilderness, utterly alone. You continue to paint and draw or make sculpture purely as an act of faith : the dealers, the officials, the critics, the collectors, younger artists at the school where you teach, all make it quite clear that your continued existence is a mat- ter of no consequence whatever. We have become generous to the young, at last, and alert to their intentions: this is fine and nobody would wish it to be otherwise, but we have become cruel to other artists to the point of ignoring their presence among us. As usual, a fairly vigorous situation has become wildly unbalanced and lacking in focus or perspective, for the greater number of the 'smart' young names bandied around at the moment are slavish exponents of various fashions initially formulated, decreed and promoted, with all guns blazing, in America.

Somehow, Richards has stayed the course, with infrequent exhibitions. He has not demanded much of our attention, and I am quite certain that he would not have the faintest idea how to 'promote' either himself, as a personality, or his art. He is a true artist : a magnificent draughtsman and a fine, inventive painter. When the full resources of his talent are gathered together the results are wonderfully exhilarating. If his work is decorative, then it is so only in the way in which Rubens, Delacroix, or Matisse can, on ccasion, be called 'decorative'. Underlying everything that Richards touches is a tough, wide-eyed, almost innocent awareness of the fun- damental elements of human existence. He is an artist that many poets have responded to, with good reason. In turn, Richards has responded to them; but also to music: he has tried to paint 'sound'. Robert Motherwell has said that it is clear that painting is getting nearer to music than to anything else : many aspects of Ceri Richards's work has substan- tiated this insight, for many years.

His recent paintings contain the most tightly balanced oppositions of linear severity, or ban Is of pure colour, with a floreate abunda -ce of movement. Blossoms unfurl against sharply divided spaces : what is in flux set against something constant. Shimmering, feathery white strokes of light illuminate a compact curvilinear structure in green and blue : Jardins sous la Pluie. The exhibition blazes with light and energy; Richards points beyond the sexuality of nature to areas of colour and space which are induced like chords of music. His best paintings are like sumptuously orchestrated Japanese prints, but this is only a fraction of the truth : Richards eludes, as ever, any categorisation. Do we honour him to the same extent that he pays tribute to our imaginative response?