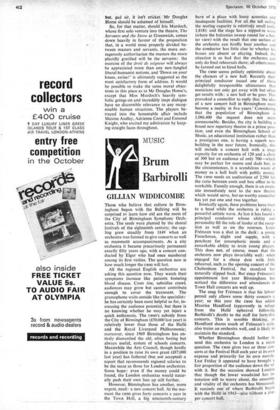 Those who believe that culture in Birm- ingham began with the Bullring will be surprised to learn how old are the roots of the City of Birmingham Symphony Orch- estra. The seeds were planted by the choral festivals of the eighteenth century; the sap- ling grew steadily from 1849 when an orchestra was formed to give concerts as well as mammoth accompaniments. As a city orchestra it became precariously permanent exactly fifty years ago, with a concert con- ducted by Elgar who had once numbered among its first violins. The question now is how much longer the CBSO will last.

All the regional English orchestras are asking this question now. They watch their symptoms increase like patients fostering blood disease. Costs rise, subsidies crawl; audiences may grow but cannot contribute enough to cover the treatment. The gramophone waits outside like the specialist: he has certainly been most helpful so far, in- creasing the audience potential, but there is no knowing whether he may yet inject a quick euthanasia. The also's subsidy from the City of Birmingham (£50,000 last year) is relatively lower than those of the Halle and the Royal Liverpool Philharmonic; moreover, since 1969 Birmingham has en- tirely dismantled the old, often boring but always useful, system of schools concerts. Meanwhile the Arts Council, though hardly in a position to raise its own grant (£87,000 last year) has fathered (but not accepted) a report that recommends regional salaries to be the same as those for London orchestras. Some hope : even if the money could be found, the London orchestras would natur- ally push their own fees up still further.

However, Birmingham has another, more urgent, need: a new concert hall. At the mo- ment the also gives forty concerts a year in the Town Hall, a big nineteenth-century barn of a place with lousy acoustics and inadequate facilities. For all the tall ceiling the seating capacity is relatively small (only 1,818); and the stage has a nipped-in waist (where the balconies swoop round for a bet- ter view) with the result that one section of the orchestra can hardly hear another and the conductor has little clue-to whether his basses are absent or playing. Indeed, the situation is so bad that the orchestra can only do final rehearsals there; all others must be farmed out to hired halls.

The CBSO seems politely optimistic about the chances of a new hall. Recently their principal conductor issued one of those delightfully irresponsible ultimatums that musicians not only get away with but often get results with : a new hall or he goes. This provoked a councillor to reply that 'the idea of a new concert hall in Birmingham must become a reality in five -years.' Considering that the population of Birmingham is 1,086,400 the request does not seem unreasonable. Besides, the city is building a brand new repertory theatre in a prime posi- tion; and even the Birmingham School of Music, an educational institution rather than a prestigious one, is having a superb new building in the near future. Ironically, this will include a concert hall with a stage capacity for an orchestra of 120 and a choir of 300 but an audience of only 700—which may be perfect for mums and dads but, in the circumstances, is a scandalous waste of money as a hall built with public money.

The CBSO needs an auditorium of 2,500 for the ratio between costs and box office to be workable. Funnily enough, there is an empty site immediately next to the new theatre which would serve, but no worthy councillor has yet put one and two together.

Ironically again, these problems have risen to a head while the orchestra is riding a powerful artistic wave. At last it has found a principal conductor whose ability and personality fill the role of leader at the recep- tion as well as , on the rostrum. Louis Fremaux was a shot in the dark: a young Frenchman, slight and supple, with a penchant for atmospheric music and a remarkable ability to train young players. This does not, of course, mean that the orchestra now plays invariably well : when engaged for a cheap date with little rehearsal, such as the opening concert of the Cheltenham Festival, the standard has naturally slipped back. But since Fremaux's appointment last year Birmingham has noticed the difference and attendances at Town Hall concerts are well up.

The snag for Frernaux is that his labour permit only allows some thirty concerts a year; so this year the also has added Maurice Handford (apparently in refuge from the Halle upheaval following Barbirolli's death) to the staff for forty-five concerts. This is sensible thinking, as Handford shares much of Fremaux's style, also trains an orchestra well, and is likely to maintain the standard.

Whether Birmingham should bother to send this orchestra to London is a mean question. The CBSO gives two or three con- certs at the Festival Hall each year at its own expense and primarily for its own morale. Last Friday it appeared to have brought a fair proportion of the audience down the ml with it. But the occasion showed London that though the lower woodwind has in- tonation still to worry about, the ensemble and vitality of the orchestra has blossomed. It reminds one of where Barbirolli began with the Halle in 1943—also without a pro- per concert hall.