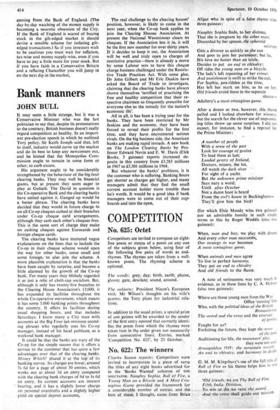 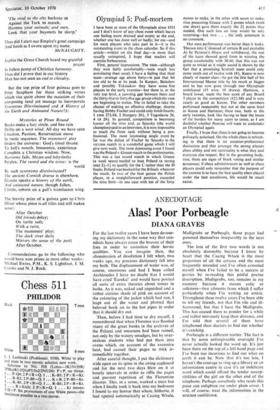 Competitors are invited to compose an eight- line poem or stanza of a poem on any one of the subjects given below, using four of the following five pairs of words as end- rhymes. The rhymes are taken from a well- known poem. The rhyming scheme is optional.

In addition to the usual prizes, a special prize of one guinea will be awarded to the sender of the first entry opened that correctly identi- fies the poem from which the rhymes were taken (not in the order given nor necessarily from consecutive lines). Entries, marked 'Competition No. 625', by 23 October,

Charles Seaton reports: Competitors were invited to incorporate in a piece of verse the titles of any eight books advertised for in the 'Books Wanted' columns of THE SPECTATOR. Naughty Sophia, Ball of Fire, a Young Man on a Bicycle and A Most Con- tagious Game provided the framework for a considerable number of entries, and the best of these, I thought, came from Brian

Allgar who in spite of a false rhyme %‘in.3 three guineas: Naughty Sophia finds, to her distress, That she is pregnant by the other man; Discarded by her spouse, the spheroid nzistress Gets a divorce as quickly as she can And goes to join her paramour; but he, His love no hotter than an icicle, Decides to put an end to chivalry: Off rides the young man on a bicycle. The lady's left repenting of her crime; And punishment is swift to strike the cur, For Sophia, pox-ridden at the time, Has left her mark on him, as he on her. Old friends avoid them in the separate

Adultery's a most contagious game.

After a dozen or two, however, this theme palled and I looked elsewhere for winners; but the search for the clever use of unpromis- ing titles threw up some surprises. I did not expect, for instance, to find a reproof for the Prime Minister: A number of people With a sense of the past Look for courage of genius To lead them at last; Landed gentry of Ireland, Doctors, miners, the lot, All watch the dark river For sight of a yacht.

But the unknown prime minister Says nary a word; Until after October Not a damn hoot is heard

From the owl's house in Buckingham—

They'll give him the bird!

(for which Elsie Moody wins two guineas) nor an admirable homily in such simple terms as this by Roger Woddis (also two guineas): When, man and boy, we play with drums And every other titan succumbs,

Our strategy in war becomes A most contagious game.

When animals and men agree To live in perfect harmony, They put an end to chivalry And old friends to the flame.

A note of seriousness was very much in evidence, as in these lines by C. A. Mclvor (also two guineas): Where are those young men from the War Office 'missing lists

Who, with the political ideas of the British

The sword and the cross and the courage of genius.

Forfeiting the future, they kept the SellSe

of the past, Auditioning for life, the mummers' play.

they were not cast. Armageddon 1918: the mountain wreath. An end to chivalry, and harmony in death.

G. M. M. Kingsbury's use of the full title of Ball of Fire as his theme helps him to vdn three guineas: 'Old friends, we are The Ball of Fire, Fifth India Division,

To win or die we raise the sword. And the cross shall guide our mission.

'The road to the city beckons us Against the Turk to march, Harness your animals; and men. Look that your bayonets be sharp.'

Thus did I start our Empire's great campaign And finish as I swore upon my name.

Sophia the Great Church heard my grateful prayer In fullest pomp of Christian harmony. Thus did I prove that in our history Man has not seen an end to chivalry.

But the top prize of four guineas goes to Peter Scupham for these striking verses which rise .quite above the occasion of their composing (and yet manage to incorporate Synonyms Discriminated and A History of the Earth and Animated Nature!):

Mysteries at Piran Round Banks make a lazy circle, and fine rain Drifts on a west wind. All day we have seen Creation, Passion, Resurrection move In rustic sequence. The mummers' play Orders the universe : God's tinsel throne To hell's mouth. Innocence, experience Complete a Christian wisdom. Now, Harmony fails. Mazes and labyrinths Perplex. The sword and the cross: is the world By such synonyms discriminated? The ancient Cornish drama is elsewhere. Granite speaks a history of the earth, And animated nature, though fallen, Climbs, reborn on a gull's translucent wing.

The brevity prize of a guinea goes to Chris Oliver whose piece is all titles and still makes sense : After October Old friends delay; On turtle tails, With a twist, The mummers' play; The dark river daily Mirrors the sense of the past; After October.

Commendations go to the following who would have won prizes in most other weeks: Michael Ewins, P.M., K. S. Lightfoot, J. M. Crooks and N. J. Rock.