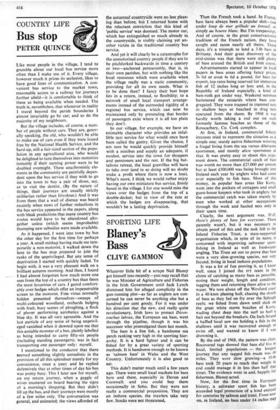 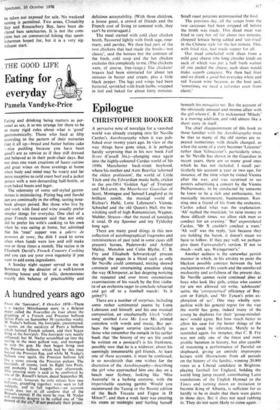 Whatever little bit of a scrape Neil Blaney got himself into recently—you may recall that he was Minister of Agriculture and Fisheries in the Irish Government until Jack Lynch dismissed him for alleged complicity in the gun-running plot—as far as anglers are con- cerned he can never be anything else but a hundred per cent goody. For it was under his direction that the new, and really quite revolutionary, Irish laws to protect Dicen- trachus labrax, the European sea bass, went through the pipeline, though it was his successor who promulgated them last month.

The bass is a fine fish, a handsome sea perch ranking very high in the sporting hier- archy. It is a hard fighter and it can be fished for by a great variety of sporting methods. It is handsome enough to be known as 'salmon bass' in Wales and the West Country. Unfortunately it is also good to eat.

This didn't matter much until a few years ago. There were small local markets for bass here and there, especially in Devon and Cornwall; and you could buy them occasionally in Soho. But they were not really a commercial proposition. They are an inshore species, the trawlers take very few. Stocks were not threatened.

Then the French took a hand. In France, bass have always been a popular dish—(see under loup de mer grillade au fenouil, or simply au beurre blanc. But I'm trespassing). And of course, in the great conservationist

tradition of the French nation, they have caught and eaten nearly all theirs. The days, it's a triumph to land a 3-lb bass in Brittany. And their great discovery of the mid-sixties was that there were still plenty of bass around the British and Irish coasts. Advertisements started to appear in local papers in bass areas offering fancy. prices,

export, top rates being reserved for immature fish of 12 inches long or less; and, in the Republic of Ireland especially, a kind of bass-rush, got under way. Weekend netsmen hammered the estuaries where bass con- gregated. They were trapped in trammel nets in shallow bays or beached in drag nets operated from the shore. By 1968 it was hardly worth taking a rod out on such formerly famous beaches as those of the Rosscarbery, Co. Cork complex.

At first, in Ireland, commercial fishery interests tried to represent the situation as a simple one; sturdy native fishermen wresting a frugal living from the sea versus dilettante sportsmen, and mostly alien sportsmen at that. It was pretty easy to shoot this argu- ment down. The commercial catch of bass was worth no more than £25,000 per annum but at least 000,000 was being brought into Ireland each year by anglers who had come over especially to fish bass. Most of this money, in popular bass areas like Kerry, went into the pockets of cottagers and small guest-house keepers who took in anglers: but the commercial catch was taken mainly by men who worked at other occupations through the week and hauled nets only in their spare time.

Clearly, the next argument was, Well, there's plenty of bass for everyone. There patently wasn't, but it was necessary to obtain proof of this and the task fell to the Inland Fisheries Trust, a state-supported organisation which, in spite of its name, is concerned with improving saltwater sport- fishing in Ireland as well as freshwater angling. The Trust set out to prove that bass were a very slow-growing species, not very fecund, living in local inshore populations. It was a lot of fun proving it, as I know -well, since I joined the iF-r team in the chore of catching as many bass as posssible, noting their weight, length and condition, tagging them and returning them alive to the water. We tore about off the Wexford coast in a 40-knot planing hull, chasing the shoals of bass as they fed on fry over the Splaugh reefs; we fished from dawn until dusk on the great white storm beaches of KerrY, wading chest deep into the surf to hurl a bait out beyond the breakers. On Inch Strand a baffled-local saw me holding a fish in the shallows until it was recovered enough to swim off, and wanted to know if I was drowning it. By the end of 1968, the pattern was clear. Recovered tags showed that bass did live In local, limited populations — the longest journey that any tagged fish made was 40 miles. They were slow growing—a 10-lb bass took 20 years to reach that weight (a cod could manage it in less than half that time). The evidence went in and, happily for fishermen, Blaney acted.

Now, for the first time in European history, a saltwater sport fish has been accorded legal protection of a kind enjoyed for centuries by salmon and trout. From now on, in Ireland, no bass under 14 inches mg be taken nor exposed for sale. No weekend netting is permitted. Two areas, Clonakilty Bay and Rosscarbery Bay, have been de- clared bass sanctuaries. It is not the com- plete ban on commercial fishing that sport- fishermen hoped for, but it is a very sig- nificant start.