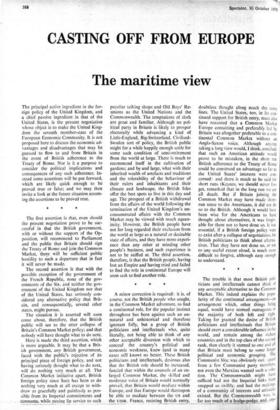 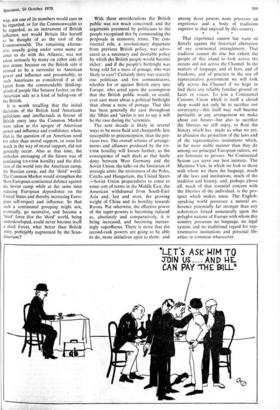 CASTING OFF FROM EUROPE The maritime view

The principal active ingredient in the for- eign policy of the United Kingdom, and a chief passive ingredient in that of the United States, is the present negotiation whose object is to make the United King- dom the seventh member-state of the European Economic Community. It is not proposed here to discuss the economic ad- vantages and disadvantages that may be guessed to flow to and from Britain in the event of British adherence to the Treaty of Rome. Nor is it a purpose to consider the political implications and consequences of any such adherence. In- stead some assertions will be put forward, which are likely quick enough to be proved true or false; and we may then invite a look at the future situation assum- ing the assertions to be proved true.

* The first assertion is that, even should the present negotiation prove to be suc- cessful in that the British government, with or without the support of the Op- position, will recommend to Parliament and the public that Britain should sign the Treaty of Rome and join the Common Market, there will be sufficient public hostility to such a departure that in fact it will never be made.

The situation it is asserted will soon come about, therefore, that the British public will see to the utter collapse of Britain's Common Market policy; and that nobody will have thought what to do next. Here is made the third assertion, which is more arguable. It may be that a Brit- ish government, any British government, faced with the public's rejection of its principal piece of foreign policy, and not having seriously thought what to do next, will do nothing very much at all. The Common Market initiative apart, British foreign policy since Suez has been to do nothing very much at all except to with- draw as gracefully and painlessly as pos- sible from its Imperial commitments and remnants, while paying lip service to such peculiar talking shops and Old Boys' Re- unions as the United Nations and the Commonwealth. The temptations of sloth are great and familiar. Although no pol- itical party in Britain is likely to prosper electorally while advancing a kind of Little-England, Big-Switzerland, Civilised- Sweden sort of policy, the British public might for a while happily enough settle for some such condition of semi-retirement from the world at large. There is much to recommend itself in the cultivation of gardens; and by and large, what with their inherited wealth of artefacts and traditions and the tolerability of the behaviour of their rulers and inhabitants and their climate and landscape, the British Isles offer the best spots to live in this day and age. The prospect of a British withdrawal from the affairs of the world following the termination of the United Kingdom's un- consummated affaire with the Common Market may be viewed with much equan- imity. However, the British people have not for long regarded their exclusion from the world at large as a natural or desirable state of affairs, and they have more experi- ence than any other at minding other people's business, and such experience is not to be sniffed at. The third assertion, therefore, is that the British people, having lost an Empire and having tried and failed to find the role in continental Europe will soon seek to find another role.

A minor correction is required: it is, of course, not the British people who sought, in the Common Market adventure, to find a continental role, for the popular instinct throughout has been against such an un- natural and unhistorical and therefore ignorant folly, but a group of British politicians and intellectuals who, quite literally, not being able to think of any other acceptable diversion with which to conceal the country's political and economic weakness, knew (and in many cases still know) no better. These British politicians and intellectuals, desirous also that the British role should be increased, fancied that within the counsels of an en- larged Common Market, the skilled and moderate voice of Britain would normally prevail, that Britain would mediate within Europe, and that Europe would thereupon be able to mediate between the us and the USSR. France, resisting British entry, „ doubtless thought along much the same lines. The United States, too, in its con- tinued support for British entry, must also have reasoned that a Common Market Europe containing and preferably led by Britain was altogether preferable to a con. tinental Common Market without an Anglo-Saxon voice. Although anyone taking a long view would, I think, conclude that such an American attitude would prove to be mistaken, in the short run British adherence to the Treaty of Rome could be construed an advantage so far as the United States' interests were con• cerned: and there is much to be said for short runs (Keynes, we should never for- get, remarked that in the long run we are all dead). But if Britain joining the Common Market may have made short. run sense to the Americans, it did not do so to the British. Although it would have been wise for the Americans to have thought about alternatives, it was forgiv.

able for them not to have done so. It was essential, if a British foreign policy were to exist after a collapse of negotiations, for British politicians to think about altema. tives. That they have not done so. or not to any useful extent aloud, is much more difficult to forgive, although easy enou0 to understand.

The trouble is that most British poli- ticians and intellectuals cannot think of any acceptable alternative to the Common Market. This indeed explains the poPu• larity of the continental arrangement—an arrangement which, other things being equal, would have seemed outrageous to the majority of . both left and right Taking for granted the desire of British politicians and intellectuals that Britain should exert a considerable influence in th:. world, and remain among the richest countries and in the top class of the second rank, then clearly it seemed to one and all that Britain must belong to some larger political and economic grouping. The Communist bloc was obviously out: apart from a few Communist party members, not even the Marxists wanted such a solu- tion. The Commonwealth might have sufficed had not the Imperial links been snapped so swiftly, and had the making, of a community of interests and attitud.es existed. But the Commonwealth was, is, far too much of a hodgepodge, and, anY' way, not one of its members would care to be regarded, or for the Commonwealth to be regarded, as an instrument of British influence, nor would Britain like herself to be thought of as the tool of the Commonwealth. The remaining alterna- tive, usually going under some name or other to do with the Atlantic, was not taken seriously by many on either side of that ocean, because on the British side it seemed to be a surrender to American power and influence and presumably, to such Americans as considered if at all (apart from the commendable thinking- aloud of people like Senator Javits), on the American side as a kind of baling-out of the British.

It is worth recalling that the initial decisions of the British (and American) politicians and intellectuals in favour of British entry into the Common Market were taken at the apogee of American power and influence and confidence, when, that is, the question of an American need for other than moral support, or even for much in the way of moral support, did not generally occur. Also at that time, the orthodox envisaging of the future was of continuing US-USSR hostility and the divi- sion of the world into the American camp, the Russian camp, and the 'third' world. The Common Market would strengthen the West European continental defence against the Soviet camp while at the same time reducing European dependence on the United States and thereby increasing Euro- pean self-respect and influence. So that such a continental grouping might not, eventually, go neutralist, and become a 'third' force (for the 'third' world, being underdeveloped, could never become itself a third force), what better than British entry, preferably augmented by the Scan- dinavians? * With these considerations the British public was not much concerned; and the arguments presented by politicians to the people recognised this by commending the proposals in economic terms. The con- tinental role, a revolutionary departure from previous British policy, was advo- cated as a necessary and desirable policy by which the British people would become richer: and if the people's birthright was being sold for a mess of pottage, who was likely to care? Certainly there was scarcely one politician and few commentators, whether for or against British entry into Europe, who acted upon the assumption that the British public would, or could, ever care more about a political birthright than about a mess of pottage. That this has been generally the case throughout the 'fifties and 'sixties is not to say it will be the case during the 'seventies.

The next decade is likely in several ways to be more fluid and changeable, less susceptible to preconception. than the pre- vious two. The overall scheme of arrange- ments and alliances produced by the us- USSR hostility will loosen further, as the consequence of such deals as that lately done between West Germany and the Soviet Union, the talks on the limitation of strategic arms, the restiveness of the Poles, Czechs and Hungarians, the United States —Soviet Union preparedness to come to some sort of terms in the Middle East, the American withdrawal from South-East Asia and, last and most, the growing weight of China and its hostility towards Russia. Put otherwise, the effective power of the super-powers is becoming reduced as, absolutely and comparatively, it is being increased, and becoming increas- ingly superfluous. There is more that the second-rank powers are going to be able to do, more initiatives open to them: and among those powers none possesses an experience and a body of traditions superior to that enjoyed by this country.

That experience cannot but warn us fiercely against the historical aberration of any continental entanglement. That tradition cannot do else but exhort the people of this island to look across the oceans and not across the Channel. In the matters of language, and of laws, and of freedoms, and of practice in the use of representative government we will look idly across the Channel if we hope to find there any reliably familiar ground or faces or voices. To join a Continental Customs Union which is itself a closed shop would not only be to sacrifice our sovereignty—this itself may well become inevitable in any arrangement we make about our future—but also to sacrifice the liberties we still enjoy, to flout the history which has made us what we are, to abandon the protection of the laws and of the representative institutions which, in far more stable manner than they do among our principal European suitors, we are fortunate to possess. No Continental System can serve our best interests. The Maritime View, in which we look to those with whom we share the language, much of the laws and institutions, much of the tradition and history, and, perhaps above all, much of that essential concern with the liberties of the individual, is the pro- spect which makes sense. The English- speaking world possesses a natural co- herence potentially far stronger than any coherences forced unnaturally upon the polyglot nations of Europe with whom this country possesses no language, no legal system, and no traditional regard for rep- resentative institutions and personal lib- erties in common whatsoever.

CAN PAY -THE DILL"