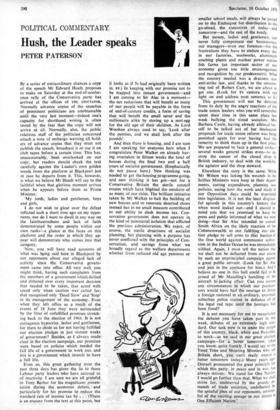 By a series of extraordinary chances a copy of the speech Mr Edward Heath proposes to make on Saturday at the end-of-conferd ence rally of the Conservative party has arrived at the offices of THE SPECTATOR. Normally advance copies of the speeches of prominent politicians are unobtainable until the very last moment—indeed one's capacity for shorthand writing is often tested by the fear that the copy will not arrive at all. Normally, also, the public relations staff of the politician concerned attach a note of embargo warning all hold- ers of advance copies that they must not publish the speech, broadcast it or use it on club tapes before a certain time. This has, unaccountably, been overlooked on our copy, but readers should check the text carefully against the Leader's own golden words from the platform at Blackpool just in case he departs from it. This, however, is what we believe Mr Heath will say to the faithful when that glorious moment arrives when he appears before them as Prime Minister.

`My lords, ladies and gentlemen, boys and girls, I do not with to gloat over the defeat inflicted such a short time ago on my oppo- nents, nor do I want to dwell in any way on the faintheartedness and lack of faith demonstrated by some people within our own ranks=a glance at the faces on this platform and the order in which they ap- pear will demonstrate who comes into that category: Now,.. you will have read accounts of what was bging said here in Blackpool by our opponents about our alleged lack of activity since the Conservative govern- ment came, into office. All very well, you might think, having such complaints from the members of a government which dallied and dithered over every important decision that needed to be taken, that acted with speed only when caution was called for, that recognised only 'Dead Slow' and `Stop' in its management of the economy. -Even when they left office as a result of the events of 18 June they were "surrounded by the litter of unfulfilled promises stretch- ing back to the election of 1964. It is not outrageous hypocrisy, ladies and gentlemen, for them to chide us for not having fulfilled our election pledges in just sixteen weeks of government? Besides, as I always made clear in the election campaign, our promises were based on policies which needed the full life of a government to work out, and this is a government which intends to have a full life.

Even so, this great gathering ov'es, the past three days has given the lie to those Labour party leaders who have accused us of inactivity. I am sure we are all grateful to Tony Barber for his magnificent presen- tation during the economic debate, and particularly for his promise to reduce the standard rate of income tax by . . (There is an erasure from the text at this point, but it looks as if 5s had originally been written in. PP.) In keeping with our promise not to be trapped into instant government—and I am coming to Sir Alec in a moment— the tax reductions that will benefit so many of our people will be payable in the form of end-of-century credits, a form of saving that will benefit the small saver and the millionaire alike by storing up a nest-egg for the old age of their children. As Lord Woolton always used to say, `Look after the pennies, and we shall look after the pounds'.

And then there is housing, and I am sure I am speaking for everyone here when I congratulate Peter Walker on already hav- ing overtaken in fifteen weeks the total of houses during the final two and a half years of socialist government. (Emphatically do not pause here.) New thinking was needed to get the housing programme going, and new thinking it has got—not for a Conservative Britain the sterile council estates which have blighted the outskirts of so many of our cities. The brilliant initiative taken by Mr Walker to halt the building of new houses and to renovate deserted slums instead has in no small measure contributed to our ability to slash income tax. Con- servative government does not operate in, the kind of ministerial isolation that afflicted the previous administration. We reject, of course, the sterile dreariness of socialist planning, but planning with a purpose has never conflicted with the principles of Con- servatism, and savings from what we broadly regard as the welfare departments whether from reduced old age pensions or smaller school meals, will always be passed on to the Exchequer for distribution to the go-ahead, the executives of today—and tomorrow—and the rest of the needy.

But money, ladies and gentlemen, can never fully compensate our businessmen, our managers—even our foremen—for the frustrations they have to endure every day in our factories, steelworks, aluminium smelting plants and nuclear power station

fish farms (an important sector of our economy given too little encouragement and recognition by our predecessors). What

the country needed was a draconic new anti-strike law, and thanks to the unremit-

ting toil of Robert Carr, we are about to

get one. (Look for TV camera with red light on and address next sentence to it.) This government will not be deterred from its duty by the angry reactions of the

trade union leaders who, you will remember spent their time in this same place last week bullying the timid socialists. Mrs Barbara Castle, having already allowed her- self to be talked out of her inadequate proposals for trade union reform was being punished again for ever having had the temerity to think them up in the first place. We are prepared to face a general strike.- several- weeks general strikes even—to de- stroy the cancer of the closed shop in British industry, to deal with the workshy, the agitator and the shop steward.

Elsewhere the story is the same. While Mr Wilson was licking his wounds in the Scillies Ministers were busy in their depart- ments, cutting expenditure, planning new policies, seeing how the work and study of our Opposition days could be translated into legislation. It is not the least disgrace- ful episode in this country's history that when word leaked out—and I should re- mind you that we promised to keep the press and public informed of what we were doing—that Sir Alec intended to consult South Africa on the likely reaction of the Colnmonwealth to our fulfilling our elec- tion pledge to sell arms to tliat bastion of the free world against communist subver- sion in the Indian Ocean he was immediately vilified. Again, I must tell the nation that we shall not be deflected from our course by such an unprincipled campaign against a great public servant. (Look for Sir Alec and join in the applause for him.) And I believe no one in this hall could fail to be proud of Mr- Maudling's handling of the aircraft hi-jacking affair. Can you picture, any circumstances in which our predeces- sors would have had the courage to detain a foreign national at A ordinary, unarmed, suburban police station in defiance of all the legal red tape until the hostages had been freed?

It is not necessary for me to recapitulate the debates you have taken part in this week, debates of an extremely high stan- dard. Our task now is to unite the people of this country, black, white and Powelbte, to work—as we said in our great election campaign—for a better tomorrow. (And you know, quite frankly, I would say to the Tired Tims and Moaning Minnies who sell Britain short, you can't really expect a better tomorrow today.) Many years ago, Disraeli pronounced the great principle for which this party, in peace and in war, has always striven: We stand for One Nation. I would go further than that. What we shall strive for, undeterred by the greedy de' mands of trade unionists, undellected. the spiteful jibes of our opponents, unmuld: ful of the swirling sewage in our streets la One Efficient Nation.'