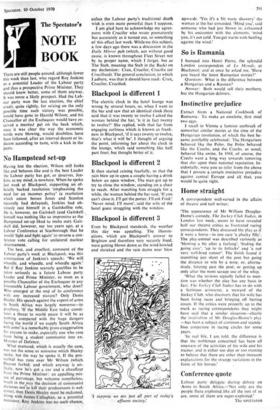 There are still people around, although fewer this week than last, who regard Roy Jenkins as a potential Leader of the Labour party and thus a prospective Prime Minister. They should know better, some of them anyway. It was never a likely prospect. Had the Lab- our party won the last election, the chief credit, quite rightly, for seizing on the only possible time such victory was possible, would have gone to Harold Wilson; and his Chancellor of the Exchequer would have re- ceived a merited pat on the back which, once it was clear the way the economic winds were blowing, would doubtless have been followed, after an interval decent or in, decent according to taste, with a kick in the pants.

No Hampstead set-up Having lost the election, Wilson still looks like and behaves like and is the best Leader the Labour party has got, or deserves. Jen- kins, to my mind, is nowhere. When he spoke last week at Blackpool, supporting an of- ficially backed resolution 'emphasising the need for an incomes policy' (a resolution which union bosses Jones and Scanlon naturally had defeated), Jenkins had ob- viously cast himself in a Gaitskellite role. He is, however, no Gaitskell (and Gaitskell himself was nothing like so impressive as the Hampstead set-up liked to make out). Gait- skell did, however, say ten years ago, at a Labour Conference at Scarborough that he would 'fight and fight again' to reverse a con- ference vote calling for unilateral nuclear disarmament.

The best, and cruelest, comment of the Labour party's week at Blackpool, was this construction of Jenkins's speech: 'We will wheedle, and wheedle, and wheedle again.' But if Roy Jenkins scarcely qualifies to. be taken seriously as a future Labour party Leader and Prime Minister, or even as a Possible Chancellor of the Exchequer in any foreseeable Labour government,, who does? Who emerged at the end of its conference with any increased stature? Only Denis Healey. His speech against the export of arms to South Africa was largely nonsense—to prophesy, 'If the Middle East today consti- tutes a threat to world peace it will be as nothing compared with the huge dangers facing the *odd if we supply South Africa With arms' is a remarkably gross exaggeration for anyone to make, especially one who rose from being a student communist into ex- Minister of Defence.

What mattered, which is usually the case, was not the sense or nonsense which Healey spoke, but the way he spoke it. If the pro- verbial bus runs over Mr Wilson (which Heaven forbid; and which anyway is un- likely, now he's got a car and a chauffeur from the Prime Minister: an appalling mis- use of patronage, but welcome nonetheless, much in the way the decision of communist dictators not to kill their predecessors is wel- come), then Denis Healey must be.reckoned, along with James Callaghan, as a potential successor. Roy Jenkins has no such chance,

unless the Labour party's traditional death wish is even more powerful than I suppose.

I am glad here to acknowledge my agree- ment with Crucifer who wrote prematurely but accurately as it turned out, to something of this effect last week. Whilvon this subject, a few days ago there was a discussion in the Daily Mirror pub (which, not without good cause, is known throughout Fleet Street not by its proper name, which I forget, but as The Stab, meaning the Stab in the Back) on my declenSion: Crux, Crucifer, Crucifix (or Crucifixed). The general conclusion, to which I adhere, was that it should have read: Crux, Crucifer, Crucified.

The electric clock in the hotel lounge was wrong by several hours, so, when I went to the bar and saw that an identical clock there said that it was twenty to twelve I asked the woman behind the bar, 'is it in fact twenty to twelve?' She replied, with that far from engaging surliness which is known as frank- ness in Blackpool, 'if it says twenty to twelve, that's what it will be'. I thought of arguing the point, informing her about the clock in the lounge, which said something like half past four; but thought better of it.

It then started raining fearfully, so that the rain blew up in upon a couple having a drink below an open window. The man got up to try to close the window, standing on a chair to reach. After watching him struggle for a while, the woman behind the bar said, 'If you can't close it, I'll get the porter. I'll ask Fred,' 'Never mind, I'll move', said the wife of the hotel guest struggling with the window.

Blackpool is different 3 Even by Blackpool standards, the weather this day was appalling. The illumin- ations, which are Blackpool's answer to Brighton and therefore very securely fixed, were getting blown down as the wind howled and shrieked and the rain damn near blew

upwards. 'Yes it's a bit nasty showery' the woman at the bar conceded. 'Mind you', said someone who had just blown in, exhausted by his encounter with the elements, 'mind you, it's not cold. You get warm with battling against the wind.'

I bumped into Henri Pierre, the splendid London correspondent of Le Monde, at Blackpool; and at once he asked me, 'Have you heard the latest Rumanian stories?'

Question: What is the difference between a Hungarian and a Russian?

Answer: Both would sell their mothers; but the Hungarian delivers.

Extract from a National Cookbook of Rumania : To make an omelette, first steal two eggs.

I recall in Vienna a famous outbreak of somewhat similar stories at the time of the Hungarian revolution, of which the best be- came justifiably celebrated: The Hungarians behaved like the Poles, the Poles behaved like the Czechs, and the Czechs, as usual, behaved like swine. In 1968, of course, the Czechs went a long way towards removing that slur upon their national reputation. In- cidentally, were you to infer from the above that I possess a certain instinctive prejudice against central Europe and all that, you would be quite right.

A correspondent well-versed in the affairs of theatre and turf writes: 'The appearance of Mr William Douglas- Home's comedy, The Jockey Club Stakes, in London last week, seems to have revealed half our theatre critics as frustrated racing correspondents. They discussed the play as if it were a horse—in one case 'a plucky filly'. The play-animal was described variously as 'blowing a bit after a furlong'. 'finding the going easy'. 'up to its fetlocks' and 'a not very well-bred runner'. The finish found it stumbling just short of the post but going the distance to win by a nose; or, alterna- tively, limping past the post; or getting up only after the most savage use of the whip.

'What the reviews signally failed to men- tion was whether the play has any basis in fact. The Jockey Club Stakes has to do with a fictitious aristocrat, a steward of the Jockey Club, who discovers that his wife has been fixing races and bringing off betting coups. tithe critics were properly up to the mark as racing correspondents they might have said that a similar situation—clearly the inspiration of Mr Douglas-Home's play —has been a subject of common and scanda- lous conjecture in racing circles for some years.

'In real life, I am told, the difference is that the nobleman concerned has been all unaware of the activities of his wife and his trainer, and is either too dim or too trusting to believe that there are other than innocent explanations for the strange variations in the form of his horses.'

Labour party delegate during debate on Arms to South Africa—'Not only are the people there exploited like all the rest of us are, some of them are super-exploited.'