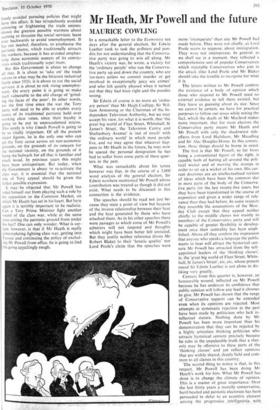 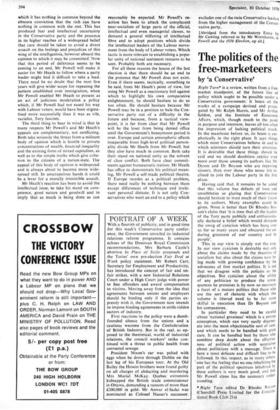 In a remarkable letter to the Economist ten days after the general election, Sir Edwin Leather took to task the pollsters and pun- dits for not understanding that the Conserva- tive party was going to win all along. Mr Heath's victory was, he wrote, a victory for the 'ordinary people' who run the Conserva- tive party up and down the country, who are 'un-news unless we commit murder or get involved in exceptionally juicy sex crimes' and who felt quietly pleased when it turned out that they had been right and the pundits wrong.

Sir Edwin of course is no more an 'ordin- ary person' than Mr Hugh Cudlipp, Sir Wil- liam Armstrong or the Chairman of the In- dependent Television Authority, but we may accept his view, for what it is worth, that 'the great big world of Fleet Street, Whitehall, St James's Street, the Television Centre and Shaftesbury Avenue' is 'out of touch with 'the ordinary world' in which most people live, and we may agree that whatever hap- pens to Mr Heath in the future, he may now be spared the personal denigration he has had to suffer from some parts of these quar- ters in the past.

What was remarkable about his terms however was that, in the course of a 3,000 word analysis of the general election, Sir Edwin nowhere mentioned Mr Powell whose contribution was treated as though it did not exist. What needs to be discussed in this connection is the evidence.

The speeches should be read not just be- cause they state a point of view but because of the inverse relationship between their heat and the heat generated by those who have attacked them. As in his other speeches there were passages to which some of Mr Powell's admirers will not respond and thoughts which might have been better left unstated. But they justify neither reference (from Mr Robert Blake) to their 'lunatic quality' nor Lord Poole's claim that the speeches were more 'intemperate' than any Mr Powell had made before. They were not chiefly, as Lord Poole seems to suppose, about immigration.

They were not intemperate. In general, as we shall see in a moment, they reflected a comprehensive sort of popular Conservatism which reputable Conservatives who join in the attack (like Lord Poole and Mr Blake) should take the trouble to recognise for what it is.

The letters written to Mr Powell confirm the existence of a body of opinion which those who respond to Mr Powell need no external evidence to tell them existed, but they leave us guessing about its size. Since we cannot be certain, we have for practical purposes to follow our noses while noting the fact, which the death of Mr Macleod makes more important, that for most electors the Conservative party means Mr Heath and Mr Powell with only the shadowiest side- effects from Lord Hailsham. Mr Maudling and Sir Alec Douglas-Home. In this connec- tion, three things should be borne in mind.

The first is that Mr Powell, so far from being a conventional figure of the right, is capable both of batting all around the poli- tical wicket and of moving the stumps in order to set up a wicket of his own. His cur- rent doctrines are an intellectualised version of ideas which have been the common diet in most parts of the body of the Conserva- tive party for the last twenty-five years, but they have been transformed in the course of exposition and given a wider range of rele- vance than they had before. In some respects they resemble the assumptions of the Mon- day Club except that they appeal neither chiefly to the middle classes nor mainly to members of the Conservative party and will be capable of greater flexibility in develop- ment once their centrality has been estab- lished. Above all they confirm the impression that anyone who speaks a language the public wants to hear will attract the hysterical cen- sure Mr Powell has attracted from the self- appointed leaders of the 'thinking classes', ie, the 'great big world of Fleet Street, White- hall, St James's Street', etc, etc, whose present mood Sir Edwin Leather is not alone in dis- liking very greatly.

Censure from this quarter is, however, an honourable wound, inflected on Mr Powell because he has undercut its confidence that public opinion will follow any lead it chooses to give. Mr Powell has shown that the range of Conservative support can be extended even when its opinions are rejected. Most attempts at systematic rejection in the past have been made by politicians who lack in- tellectual stature. Nothing done by Mr Powell has been more important than his demonstration that they can be rejected by a hi8hly articulate thinking politician who attracts hysterical censure precisely because he rubs in the unpalatable truth that a rhet- oric may be offensive to these parts of the 'thinking classes' and yet reflect opinions that are widely shared, deeply held and com- mon to all classes in this country.

The second thing to notice is that, in this respect, Mr Powell has been doing Mr Heath's work for him. What Mr Powell has done is to change the climate of opinion. This is a matter of great importance. Over the last thirty years a morally conservative, hard-headed and patriotic electorate has been persuaded to defer to an eccentric element among the progressive intelligentsia with

which it has nothing in common beyond the obscure conviction that the rich can have nothing in common with the rest. This has produced fear and intellectual uncertainty in the Conservative party and the presence in its higher reaches of a widespread belief that care should be taken to avoid a direct assault on the feelings and prejudices of this wing of the intelligentsia, however absurd the opinion to which it may be committed:- Now that this period of deference seems to be coming to an end, Mr Powell will make it easier for Mr Heath to follow where a party leader might find it difficult to take a lead. There need be no doubt that the next five years will give wider scope for repeating the pattern established over immigration, when Mr Powell enahled Mr Heath to present as an act of judicious moderation a policy which, if Mr Powell had not eased his way with Labour voters, would have been stigma- tised more successfully than it was as vile, racialist, Tory fascism.

The third thing to bear in mind is that in many respects Mr Powell's and Mr Heath's appeals are complementary, not conflicting. Both take seriously the threat from a militant body of opinion which is hostile to private concentrations of wealth, financial inequality and the existing form of mixed capitalism, as well as to the simple truths which give cohe- sion to the citizens of a nation-state. The appeal of this body of opinion is widespread and is always about to become more wide- spread still. In unscrupulous hands it could be a lever for a morally irresistible assault.

Mr Heath's reaction has been to avoid the intellectual issue, to take his stand on com- petence, good nature and goodwill and to imply that as much is being done as can

reasonably be expected. Mr Powell's re- action has been to attack the complacent near-socialism of large parts of the official, intellectual and even managerial classes, to demand a general stiffening of intellectual fibre and to adopt positions which divide the intellectual leaders of the Labour move- ment from the body of Labour voters. Which tactic is more relevant to establishing a popu- lar unity of national sentiment remains to be seen. Probably both are necessary.

For all these reasons the lesson of the last election is that there should be an end to the pretence that Mr Powell does not exist. Even if there seems, tactically, something to be said, from Mr Heath's point of view, for using Mr Powell as a reactionary foil against which to highlight his own comparative enlightenment, he should hesitate to do so too often. He should hesitate because Mr Powell may be in a position to bale the Con- servative party out of a difficulty in the future and because, from a tactical view- point, it is far from clear that Mr Powell will be the loser from being denied office until the Government's honeymoon period is over. Europe and certain atmospheric effects inseparable from high-level political person- ality divide Mr Heath from Mr Powell, but they also have much in common. Both take their stand on national unity as the solvent of class conflict. Both have clear commit- ments against bureaucratic statism. Mr Heath has office to demonstrate his political mean- ing, Mr Powell a self-made political theatre. If Europe recedes as a political problem, there need really be nothing between them except differences of technique and irrele- vant personal 'distaste. It is not only Con- servatives who want an end to a policy which excludes one of the twin Conservative leaders from the higher management of the Conser- vative party.

[Abridged from the introductory Essay by Mr Cowling referred to by Mr Worsthorne, Powell and the 1970 Election, op cit.]