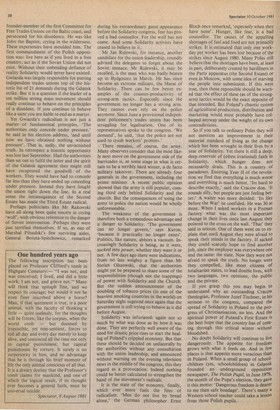 The following inscription has been placed on Professor Clifford's tomb in Highgate Cemetery:— "I was not, and was conceived; I lived, and did a little work; I am not, and grieve not." Many will think that epitaph fine, and we respect its courage; but would it not be even finer inscribed above a horse? Man, if that sentiment is true, is a poor animal, with the faculty of thinking a little — quite uselessly, for the thoughts will be frozen, like the corpses, when the world cools — but doomed by irresistible, yet non-sentient, forces to toil all day and every day merely to keep alive, and sentenced all the time not only to capital punishment, but capital punishment by torture. It surely is no surperiority in him, and no advantage that he is through his brief moment of life the only animal conscious of all that. It is a dreary destiny that the Professor's tomb claims for mankind, and one of which the logical result, if its thought ever becomes a general faith, must be universal suicide.