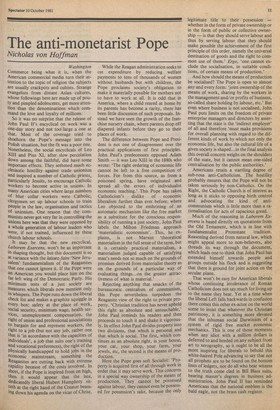 Washington Commerce being what it is, when the American commercial media turn their attention to the topic of religion the subjects are usually crackpots and cultists. Strange evangelists from distant Asian cultures, whose followings here are made up of pouty and pimpled adolescents, get more attention than the denominations which command the love and loyalty of millions.

So it was no surprise that the release of John Paul 1I's encyclical on work was a one-day story and not too large a one at that. Most of the coverage tried to shoehorn the Pope's message into the Polish situation, but the fit was a poor one. Nonetheless, the social encyclicals of Leo XIII and Pius XI, after slow percolation down among the faithful, did have some important effects. They softened much ecclesiastic hostility against trade unionism and inspired a number of Catholic priests, Particularly Jesuits, to encourage Catholic workers to become active in unions. In many American cities where large numbers Of blue collar workers were Catholic, clergymen set up labour schools to train People in the law, organisation and tactics of unionism. One reason that the communists never got very far in controlling the unions here was that they were opposed by a whole generation of labour leaders who were, if not trained, influenced by these church labour schools.

It may be that the new encyclical, Laborem Exercens, won't be as important in shaping thought, but this document is so at variance with the laissez-faire 'New Jerusalem' fundamentalism of the Reaganites that one cannot ignore it. If the Pope were an American you would place him on the far left wing of the Democratic Party. His minimum tests of a just society are measures which liberals now mention only in whispers. The Pope runs down the liberal check list and makes a graphite squiggle in every box: safety at the place of work, social security, minimum wage, health services, unemployment compensation, the right of union and professional associations to bargain for and represent workers, the right to a job (but not any job, rather one that is 'in accordance with the capacities of individuals', a job that suits one's training and vocational preferences), the right of the Physically handicapped to hold jobs in the economic mainstream, something the Reaganites are cutting back with extreme rapidity because of the costs involved. In Short, if the Pope is inspired from on high, then it would appear that the late, dedicatedly liberal Hubert Humphrey sitteth at the right hand of the Creator beaming down his agenda on the vicar of Christ. While the Reagan administration seeks to cut expenditure by reducing welfare payments to tens of thousands of women without husbands but with children, the Pope proclaims society's obligation to make it materially possible for mothers not to have to work at all. It is odd that in America, where a child reared at home by its parents has become a rarity, there has been little discussion of such proposals. Instead we have seen the growth of the franchise nursery chain, where parents drop off diapered infants before they go to their places of work.

The difference between Pope and President is not one of disagreement over the practical applications of first principles. John Paul's predecessors opposed Adam Smith — it was Leo XIII in the 1880s who wrote: 'The right ordering of economic life cannot be left to a free competition of forces. For from this source, as from a poisoned spring, have originated and spread all the errors of individualist economic teaching.' This Pope has taken Catholicism's dislike of economic liberalism further than ever before: where Leo objected to the enshrining of an automatic mechanism like the free market as a substitute for the conscious responsibility of running a just society, John Paul labels the Milton Friedman approach 'materialistic economism'. This, he explains, is not Marxist 'theoretical materialism in the full sense of the term, but it is certainly practical materialism, a materialism judged capable of satisfying man's needs not so much on the grounds of premises derived from materialist theory as on the grounds of a particular way of evaluating things.. .on the greater attractiveness of what is material.'

Rejecting anything that smacks of the bureaucratic centralism of communism, this Pope nevertheless torpedoes the Reaganite view of the right to private property. 'Christian tradition has never upheld this right as absolute and untouchable,' John Paul reminds his readers and then proceeds to touch it and shake it vigorously. In effect John Paul divides property into two divisions, that which is personal and that which is social. The first, which continues as an absolute right, is your house, your car, your shop, your farm, your jewels, etc, the second is the means of production. Here the Pope goes soft Socialist: 'Property is acquired first of all through work in order that it may serve work. This concerns in a special way ownership of the means of production. They cannot be possessed against labour, they cannot even be possessed for possession's sake, because the only legitimate title to their possession — whether in the form of private ownership or in the form of public or collective ownership — is that they should serve labour and thus by serving labour that they should make possible the achievement of the first principle of this order, namely the universal destination of goods and the right to common use of them.' Ergo, 'one cannot exclude the socialisation, in suitable conditions, of certain means of production.'

And how should the means of production be socialised? The Pope is open to almost any and every form: 'joint ownership of the means of work, sharing by the workers in the management and/or profits of business, so-called share holding by labour, etc.' But even where business is not socialised, John Paul puts limits on the freedom of private enterprise managers and directors by asserting that the state is the 'indirect employer' of all and therefore 'must make provisions for overall planning with regard to the different kinds of work by which not only the economic life, but also the cultural life of a given society is shaped... in the final analysis this overall concern weighs on the shoulders of the state, but it cannot mean one-sided centralisation by the public authorities.'

Americans retain a startling degree of sub-rosa anti-Catholicism. The hostility probably ensures that the Pope will not be taken seriously by non-Catholics. On the Right, the Catholic Church is of interest as long as it sticks to opposing birth control and advocating the kind of anticommunism which is little more than a rationalisation for acts of rapacious greed.

Much of the reasoning in Laborem Ex ercens is based directly on quotations from the Old Testament, which is in line with fundamentalist Protestant tradition. Reasoning derived from natural law, which might appeal more to non-believers, also threads its way through the document, which leads one to think that John Paul has extended himself towards people and groups outside his flock and is suggesting that there is ground for joint action on the secular plane.

That won't be easy for American liberals whose continuing intolerance of Roman Catholicism does not say much for living up to the name they bear. Yet at a time when the liberal Left falls backwards in confusion there comes this other ex-actor on the world scene to insist that whatever the Christian patrimony, it is something more elevated that the inhuman social Darwinism of a system of rigid free market economic mechanics. This is one of those moments when any idiot with a million dollars is deferred to and heeded on any subject from art to xerography, so it ought to be all the more inspiring for liberals to behold this white-haired Pole advancing to say that not all prophets are to be found on the bottom lines of ledgers, nor do all who bear witness to the truth come clad in Bill Blass suits, bearing master's degrees in business administration. John Paul II has reminded Americans that the national emblem is the bald eagle, not the brass cash register.