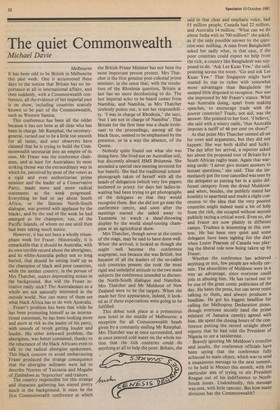 Melbourne It has been odd to be British in Melbourne this past week. One is accustomed these days to the notion that Britain has no importance at all in international affairs, and then suddenly, with a Commonwealth conference, all the evidence of her imperial past is on show, including countries scarcely known to be part of the Commonwealth, such as Western Samoa.

This conference has been all the odder because it has not been at all clear who has been in charge. Mr Ramphal, the secretarygeneral, turned out to be a little too smooth for all tastes, and sour observers have claimed that he is trying to build the Commonwealth secretariat into an empire of its own. Mr Fraser was the conference chairman, and at least for Australians its most striking theme was the extraordinary way in which he, perceived by most of the voters as a rigid and even authoritarian prime minister and the leader of a Conservative Party, made more and more radical statements as the week progressed. Everything he had to say about South Africa, or the famous North-South dialogue, was greeted with applause by the blacks, and by the end of the week he had emerged as the champion, too, of the Pacific Islands, of whom no one until then had been taking much notice.

However, it has not been a wholly triumphant week for Fraser. Historically, it is remarkable that it should be Australia, with its own terrible record about the aborigines, and its white-Australia policy not so long buried, that should be setting itself up as the champion of black and poor countries, while the mother country, in the person of Mrs Thatcher, makes deprecating noises in the background. But will the Fraser initiative really stick? The Australasians as a whole are not naturally interested in the outside world. Nor can many of them see what black Africa has to do with Australia.

Fraser's problem has been that while he has been promoting himself as an international statesman, he has been looking more and more at risk as the leader of his party, with sounds of revolt getting louder and louder. His other awkward problem, the aborigines, was better contained, thanks to the reluctance of the black Africans even to talk to the radical aborigine spokesmen. This black concern to avoid embarrassing Fraser produced the strange consequence that the aborigine militants were led to describe Nyerere of Tanzania and Mugabe of Zimbabwe as 'hypocrites' and traitors.

The country responsible tor this strange and disparate gathering has stayed pretty much in the background. It must be the first Commonwealth conference at which the British Prime Minister has not been the most important person present. Mrs Thatcher is the first genuine post-colonial prime minister, in the sense that, with the resolution of the Rhodesia question, Britain at last has no more decolonising to do. The last imperial echo to be heard comes from Namibia, and Namibia, as Mrs Thatcher tirelessly points out, is not her responsibility. 'I was in charge of Rhodesia,' she says, 'but I am not in charge of Namibia'. That Britain for the first time was a shade irrelevant to the proceedings, among all the black faces, seemed to be emphasised by the presence, or in a way the absence, of the Queen.

Nobody quite found out what she was doing here. She lived not on Australian soil, but discreetly aboard HMS Britannia. She attended a special race meeting invented for her benefit. She had the traditional schoolphotograph taken of herself with all the heads of delegation (which very few papers bothered to print): for days her ladies-inwaiting had been trying to get photographs of the delegates so that they would recognise them. But she did not go near the conference centre, and soon after the meetings started she sailed away to Tasmania to watch a sheaf-throwing display by the world sheaf-tossing champion at an agricultural show.

Mrs Thatcher, though never at the centre of the stage, may be said to have done well. When she arrived, it looked as though she might well 'become the conference scapegoat, not because she was British, but because of all the leaders of the so-called rich countries present she took the most rigid and unhelpful attitude to the two main subjects the conference intended to discuss: the North-South dialogue and Namibia. Mrs Thatcher and Mr Muldoon of New Zealand were to be the targets. When she made her first appearance, indeed, it looked as if these expectations were going to be fulfilled.

This debut took place at a pretentious new hotel in the middle of Melbourne: a reception for all Commonwealth heads given by a constantly smiling Mr Ramphal. Mrs Thatcher was at once surrounded, and at once poured cold water on the whole notion that the rich countries could do anything at all to help the poor. Britain, she said in that clear and emphatic voice, had 55 million people, Canada had 22 million, and Australia 14 million. 'What can we do about India with its 700 million?' she asked, as if the only possible answer to the question was: nothing. A man from Bangladesh asked her sadly what, in that case, if the poor countries could expect no help from the rich, a country like Bangladesh was supposed to do. 'Ask Lee Kuan Yew,' she said, pointing across the room. `Go and ask Lee Kuan Yew.' That Singapore might have started its rise to riches with somewhat more advantages than Bangladesh she seemed little disposed to recognise. Nor was she impressed by Mr Fraser's stance. What was Australia doing, apart from making speeches, to encourage trade with the poorer countries? Trade, not aid, was the answer. She pointed to her foot. 'I believe,' she said with a wintry smile, 'that Australia imposes a tariff of 46 per cent on shoes?'

At that point Mrs Thatcher seemed all set for rows and arguments, but they did not happen. She was both skilful and lucky. The day after her arrival, a reporter asked her about the proposed tour of Britain by a South African rugby team. Again that warning smile: 'I never give instant answers to instant questions,' she said. That she immediately got the tour cancelled was seen by the delegates as putting her in a quite different category from the dread Muldoon: and when, besides, she publicly stated her hostility to apartheid and made a slight concession to the idea that the very poorest countries might indeed need a bit of help from the rich, she escaped without anyone publicly saying a critical word. Even so, she and Fraser are now plainly in different camps. Trudeau is interesting in this context. He has been very quiet and some delegates have been sighing for the days when Lester Pearson of Canada was playing the liberal role now being taken up by Fraser.

Whether the conference has achieved anything or not, few people are wholly certain. The absurdities of Muldoon were in a way an advantage, since everyone could join in abusing him. He has turned out to be one of the great comic politicians of the day. He hates the press, but can never resist talking to them, and always produces a headline. He got his biggest headline for calling the Melbourne Declaration pious, though everyone secretly (and the prime minister of Jamaica openly) agreed with him. He spent the closing hours of the conference putting the record straight about reports that he had told the President of Nigeria to see a taxidermist.

Bravely ignoring Mr Muldoon's crossfire and insults, the conference officials have been saying that the conference fully achieved its main object, which was to send a unanimous message to the next summit, to be held in Mexico this month, with the particular aim of trying to stir President Reagan out of his indifference to NorthSouth issues. Undoubtedly, this message was sent, with little rancour. But how many divisions has the Commonwealth?