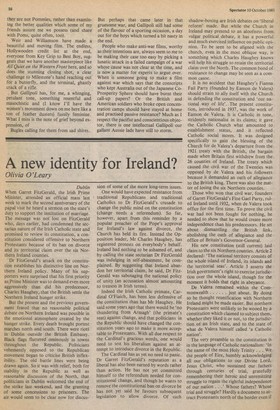 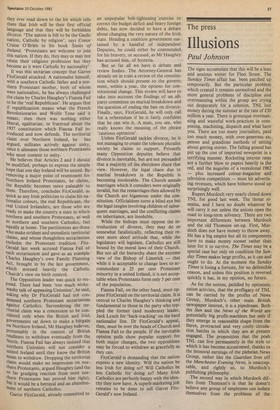 A new identity for Ireland?

Dublin When Garret FitzGerald, the Irish Prime Minister, attended an official mass last week to mark the second anniversary of the papal visit he heard a sermon on the state's duty to support the institution of marriage. The message was not lost on FitzGerald who, days earlier, had condemned the sectarian nature of the Irish Catholic state and promised to review its constitution, a constitution considered offensive to Northern Protestants because of its ban on divorce and its territorial claim over the six Northern Ireland counties.

Dr FitzGerald's attack on the constitution establishes his distinctive line on Northern Ireland policy. Many of his supporters were surprised that his first priority as Prime Minister was to demand even more aggressively than did his predecessor, Charles Haughey, that the British settle the Northern Ireland hunger strike.

But the present and the previous government feared that no reasonable political debate on Northern Ireland was possible in the emotional atmosphere created by the hunger strike. Every death brought portest marches north and south. There were riots in Dublin outside the British Embassy. Black flags fluttered ominously in towns throughout the Republic. Politicians vehemently opposed to the Republican movement began to criticise British inflexibility. The old battle lines were being drawn again. So it was with relief, both for stability in the Republic as well as reasonable discussion of the North, that politicians in Dublin welcomed the end of the strike last weekend, and the granting of some concessions to prisoners. The air would seem to be clear now for discus sion of some of the more long-term issues.

One would have expected resistance from traditional Republicans and traditional Catholics to Dr FitzGerald's crusade to change the public mind on the constitution (change needs a referendum). So far, however, apart from this reminder by a popular preacher of the Pope's approval for Ireland's law against divorce, the Church has held its fire. Instead the Opposition leader, Mr Charles Haughey, has registered protests on everybody's behalf. Ireland had nothing to be ashamed of, and by calling the state sectarian Dr FitzGerald was indulging in self-abasement, he complained. By suggesting that Ireland abandon her territorial claim, he said, Dr FitzGerald was sabotaging the national policy of unity (an accusation almost amounting to treason in Irish terms).

Indeed the Irish Catholic primate, Cardinal O'Fiaich, has been less defensive of the constitution than has Mr Haughey. He said some years ago that there would be 'no thundering from Armagh' (the primate's seat) against change, and that politicians in the Republic should have changed the constitution years ago to make it more acceptable to Protestants. With all due respect to the Cardinal's gracious words, one would need to test his liberalism against an attempt to introduce divorce in the Republic.

The Cardinal has as yet no need to panic. Dr Garret FitzGerald's reputation as a liberal has also been earned by words rather than action. He has not yet committed himself to the referendum needed for constitutional change, and though he wants to remove the constitutional ban on divorce he has not yet said he favours subsequent legislation to allow divorce. Of such shadow-boxing are Irish debates on 'liberal reform' made. But while the Church in Ireland may pretend to an aloofness from vulgar political debate, it has a powerful and much exercised influence on public opinion. To be seen to be aligned with the church, even in the most oblique way, is something which Charles Haughey knows will help his struggle to retain the territorial claim over the North. The common bond of resistance to change may be seen as a common cause.

It is no accident that Haughey's Fianna Fail Party (founded by Eamon de Valera) should strain to ally itself with the Church in defending the constitution and 'our national way of life'. The present constitution, introduced in 1937, was the work of Eamon de Valera. It is Catholic in tone, stridently nationalist in its claims; it gave the Catholic Church what amounted to establishment status, and it reflected Catholic social mores. It was designed specifically to gain the blessing of the Church for de Valera's departure from the 1921 treaty with the British, the bargain made when Britain first withdrew from the 26 counties of Ireland. The treaty which caused the civil war of the Twenties was opposed by de Valera and his followers because it demanded an oath of allegiance to the British king. There was also the matter of losing the six Northern counties.

Those who won that civil war, founders of Garret FitzGerald's Fine Gael Party, ruled Ireland until 1932, when de Valera took office for the first time. To prove the civil war had not been fought for nothing, he needed to show that he would create more independence than his predecessors. He set about dismantling the British link, abolishing the oath of allegiance and the office of Britain's Governor-General.

His new constitution (still current) laid claim to the six Northern counties. Article 2 declared: 'The national territory consists of the whole island of Ireland, its islands and the territorial seas'. Article 3 asserts the Irish government's right to exercise jurisdiction over the whole island, though for the moment it holds that right in abeyance.

De Valera remained within the Com monwealth just about. By doing so he thought reunification with Northern Ireland might be made easier. But northern Protestants were unlikely to be wooed by a constitution which claimed to subject them, whether they liked it or not, to the jurisdiction of an Irish state, and to the state of what de Valera himself called 'a Catholic nation'.

The very preamble to the constitution is in the language of Catholic nationalism: 'In the name of the most Holy Trinity . . . We the people of Eire, humbly acknowledging all our obligations to our Divine Lord, Jesus Christ, who sustained our fathers through centuries of trial, gratefully remembering their heroic and unremitting struggle to regain the rightful independence of our nation . . .' Whose fathers? Whose trial and struggle? Hardly a document to attract Protestants north of the border even if they ever read down to the bit which tells them that Irish will be their first official language and that they will be forbidden divorce. 'The nation is felt to be the Gaelic nation, Catholic by religion', says Conor Cruise O'Brien in his book States of /re/and. 'Protestants are welcome to join this nation. If they do, they may or may not retain their religious profession but they become as it were Catholic by nationality'.

It was this sectarian concept that Garret FitzGerald attacked. A nationalist himself, With a southern Catholic father and a northern Protestant mother, both of whom were nationalists, he has always challenged the claim by Charles Haughey's Fianna Fail to be the 'real Republicans'. He argues that if republicanism means what the French Revolutionaries and Wolfe Tone said it meant, then there was nothing either liberal, egalitarian, or fraternal about the 1937 constitution which Fianna Fail introduced and now defends. The territorial claim over Northern Ireland, he has argued, militates actively against unity, since it alienates those northern Protestants , who must consent to unity.

He believes that Articles 2 and 3 should be modified, perhaps to express the simple hope that one day Ireland will be united. By removing a major point of resentment for Northern Ireland Protestants, he claims, the Republic becomes more palatable to them. Therefore, concludes FitzGerald, as quick as any Irish politician to claim his nationalist colours, the real Republicans, the real United Irelanders, are those who are ready to make the country a state in which northern and southern Protestants, as well as northern and southern Catholics, feel equally at home. The partitionists are those Who make strident and unrealistic territorial Claims, and whose thoughtless sectarianism excludes the Protestant tradition. FitzGerald last week accused Fianna Fail of such sectarianism and gave as an example Charles Haughey's own Family Planning Act, brought in by the last government, Which stressed heavily the Catholic Church's view on birth control.

The Opposition leader was quick to resPond. There had been 'too much wishyWashy talk of appeasing Unionists', he said, asking why Dr FitzGerald had not condemned northern Protestant sectarianism against Catholics. Surrendering the territorial claim was a concession to be considered only when the British and Irish governments sat down to make a bargain On Northern Ireland, Mr Haughey believes, Presumably in the context of British readiness to withdraw eventually from the North. Fianna Fail has always insisted that northern Unionists will not consider a united Ireland until they know the British mean to withdraw. Dropping the territorial claim would make no impression on northern Protestants, argued Haughey (and the SO far grudging reaction from most northern Protestants has proved him right), but it would be a betrayal and an abandon!bent of northern Catholics.

Garret FitzGerald, already committed to an unpopular belt-tightening exercise to correct the budget deficit and heavy foreign debts, has now decided to have a debate about changing the very nature of the Irish state. Heading a coalition government sustained by a handful of independent Deputies, he could either be commended for his bravery, or accused, as Mr Haughey has accused him, of hysteria.

But so far all we have is debate and review bodies. The Attorney-General has already set in train a review of the constitution which should present to the government, within a year, the options for constitutional change. This review will have to take into account the findings of an allparty committee on marital breakdown and the question of ending the ban on divorce. Finally, says, FitzGerald, he will only call for a referendum if he is fairly confident that he can win it. A man, you see, who really knows the meaning of the phrase 'cautious optimism'.

Unless FitzGerald tackles divorce, he is not managing to create the tolerant pluralist society he claims to support. Privately many Opposition deputies believe that divorce is inevitable, but are not persuaded that a majority of the electorate share that view. However, the legal chaos due to marital breakdown in the Republic is becoming intolerable. The Church annuls marriages which it considers were originally invalid, but the remarriages then allowed by the Church are bigamous under the constitution. Officialdom turns a blind eye but the legal tangles involving children of subsequent marriages, and the conflicting claims on inheritance, are insoluble.

While the bishops must oppose the introduction of divorce, they may do so somewhat fatalistically, reflecting their recent more aloof attitude that, while the legislators will legislate, Catholics are still bound by the moral laws of their Church. But not all the hierarchy share the extreme view of the Bishop of Limerick — that while it is acceptable to change laws to accommodate a 25 per cent Protestant minority in a united Ireland, it is not acceptable when Protestants form only 5 per cent of the population.

Fianna Fail, on the other hand, must oppose FitzGerald on the territorial claim. It is central to Charles Haughey's thinking and fundamental to those in the party who toppled the former (and moderate) leader, Jack Lynch for 'back-tracking' on the hard nationalist line. Dr FitzGerald's appeal, then, must be over the heads of Church and Fianna Fail to the people. If the inevitable opinion polls show popular support for both major changes, the two oppositions may be forced to withdraw as gracefully as they can.

FitzGerald is demanding that the nation express a new identity. Will the nation be less Irish for doing so? Will Catholics be less Catholic for doing so? Many Irish Catholics are perfectly happy with the identity they now have. A superb marketing job remains to be done to sell Garret FitzGerald's new Ireland.