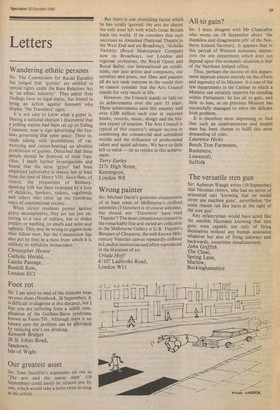 Sir: The Commission for Racial Equality has judged that 'gypsies' are entitled to special rights under the Race Relations Act as 'an ethnic minority'. They admit their findings have no legal status, but intend to bring an action against licensees who display 'No Travellers' signs.

It is not easy to know what a gypsy is. During a national election I discovered that a polling station had been set up on Ealing Common, near a sign advertising the byelaws governing that open space. These include (along with prohibitions of ratworrying and carpet-beating) an absolute prohibition of gypsies. Disturbed that these people should be deprived of their franchise, I made further investigations and found that the term 'gypsy' had been employed (adversely) in statute law at least from the time of Henry VIII. Since then, of course, the proportion of Romanyspeak ing folk has been swamped by a host of didakois, hawkers, tinkers, vagabonds and others who cheer up the humdrum ways of conventional society.

When secure residents protest against gypsy encampments, they are not just objecting to a race or culture, but to stolen Poultry or washing, to smells and noise and ugliness. They may be wrong to pigeon-hole their fellow men, but the Commission has also put its foot in a mess from which it is unlikely to withdraw immaculate.