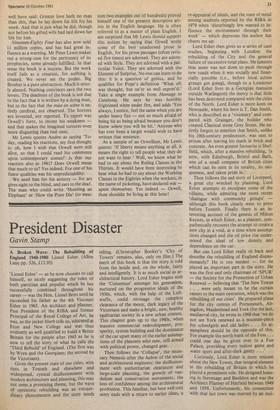 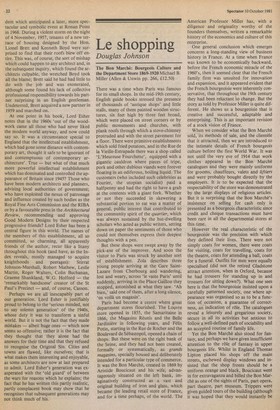 A Broken Wave: The Rebuilding of England 1940-1980 Lionel Esher (Allen Lane pp. 326, £12.95) 'Lionel Esher' — as he now chooses to call himself, so nicely suggesting the 'roles of both patrician and populist which he has successfully combined throughout his career — was the Hon. Lionel Brett until he succeeded his father as the 4th Viscount Esher in 1963. An architect and planner, Past President of the RIBA and former Principal of the Royal College of Art, he was, as the jacket blurb tells us, educated at Eton and New College and was thus evidently as well qualified to build a Better Britain for the people after 1945 as he is now to tell the story of what he calls the 'Third Rebuild' of England. (The first was by Wren and the Georgians; the second by the Victorians).

Given the present state of our cities, with riots in Toxteth and elsewhere and Widespread, cynical disillusionment with modern architecture and planning, this may not seem a promising theme, but the wave of optimistic rebuilding was an extraordinary phenomenon and the story needs telling. (Christopher Booker's 'City of Towers' remains, alas, only on film.) The merit of this book is that the story is told from the inside and, on the whole, fairly and intelligently. It is as much social as architectural history. Lord Esher begins with the 'Consensus' amongst his generation, nurtured on the progressive ideals of the 1930s, which, with the help of the Luftwaffe, could envisage the complete clearance of the messy, dark legacy of the Victorians and make a bright, new, healthy egalitarian society in a new urban context. This chapter goes up to the 1960s, when massive commercial redevelopment, prosperity, system building and the dominance of the car upset many of the earlier assumptions of the planners who now, still armed with political power, changed gear.

Then follows the 'Collapse', the necessary Nemesis after the hubris of the social and architectural engineers: the disillusionment with authoritarian clearances and large-scale planning, the growth of vandalism and conservation movements, the loss of confidence among the architectural profession. This familiar, but here well told story ends with a return to earlier ideas, a re-appraisal of ideals, and the state of mind among students reported by the RIBA in 1979 when 'disturbingly few wanted to influence the environment through their work' — which depresses the author but cheers me up.

Lord Esher then gives us a series of case studies, beginning with London: the rebuilding of the City and the general failure of successive total plans. He laments that more was not done to push through new roads when it was socially and financially possible (i.e., before local action groups got going), though to a Londoner (Lord Esher lives in a Georgian mansion outside Watlington) the mercy is that little has been destroyed compared with the cities of the North. Lord Esher is more keen on Newcastle, where his hero is T. Dan Smith, who is described as a 'visionary' and compared with Grainger, the builder who created Classical stone Grey Street. He entirely forgets to mention that Smith, unlike his 19th-century predecessor, was sent to prison after leaving his mark in brick and concrete. An even greater favourite is Sheffield, which, after a massive rebuilding, 'is now, with Edinburgh, Bristol and Bath, one of a small company of British cities which can be seen in its totality, its uniqueness, and taken pride in.'

Then follows the sad story of Liverpool, a great city wrecked by planning. Lord Esher attempts to exculpate some of the villains, while admiring the more recent 'dialogue with community groups' — although this book clearly went to press before Toxteth. Finally there is an interesting account of the genesis of Milton Keynes, in which Esher, as a planner, sympathetically recounts the attempt to create a new city in a void, at a time when assumptions changed and the oil price rise undermined the ideal of low density and dependence on the car.

But can Lord Esher really sit back and describe the rebuilding of England dispassionately? He is too modest — for he played an important part in the story. He was the first and only chairman of 'SPUR' — the Society for the Promotion of Urban Renewal — believing that 'The New Towns . . . were only meant to be the curtain raisers to the main operation, which was the rebuilding of our cities'. He prepared plans for the city centres of Portsmouth, Abingdon, Maidenhead and York (for the last, mediaeval city, he wrote in 1968 that 'we do not see York renewed as a museum-piece for schoolgirls and old ladies . . . Its atmosphere should be the opposite of this. For example the north bank of the Foss . . . could one day be given over to a Fun Palace, providing every indoor game and water sport and after-dark gaiety . .

Curiously, Lord Esher is most reticent about the New Towns, that integral element in the rebuilding of Britain in which he played a prominent role. He designed housing in Stevenage and Basildon and was the Architect Planner of Hatfield between 1949 and 1959. Unfortunately, his connection with that last town was marred by an inci dent which anticipated a later, more spectacular and symbolic event at Ronan Point in 1968. During a violent storm on the night of 4 November, 1957, tenants of a new terrace of housing designed by the Hon.

Lionel Brett and Kenneth Boyd were surprised to find that their roofs blew off en tire. This was, of course, the sort of mishap which could happen to any architect and, in the subsequent inquiry, which found the ar chitects culpable, the wretched Boyd took all the blame; Brett said he had had little to do with the job and was exonerated, although some found his lack of collective professional responsibility towards his partner surprising in an English gentleman. Undeterred, Brett acquired a new partner in 1959 and marched on.

At one point in his book, Lord Esher notes that in the 1960s 'out of the woodwork came all those who had never liked the modern world anyway, and now could say so. It was a circumstance special to England that the intellectual establishment, which had gone some distance with contemporary art, thought it safe to be ignorant of and contemptuous of contemporary architecture'. True — but what of that much more powerful intellectual establishment which has dominated and controlled the appearance of Britain since 1945? Those who have been modern architects and planners, advising local authorities of government; who have exploited the nexus of patronage and influence created by such bodies as the Royal Fine Arts Commission and the RIBA or by a favourable press in the Architectural Review, recommending and approving Good Modern Designs by their respected progressive friends? Lord Esher has been a central figure in this world. The names of the members of this establishment, all so committed, so charming, all apparently friends of the author, recur like a litany throughout this book (and have, as the Index reveals, mostly managed to acquire knighthoods and peerages): Stirrat Johnson-Marshall, Robert Mathew, Leslie Martin, Roger Walters, Colin Buchanan, Graeme Shankland, W.G. Holford — the 'remarkably handsome' creator of the St Paul's Precinct — and, of course, Casson.

Perhaps we are all inescapably part of our generation. Lord Esher is justifiably proud to belong to the 'serious minded, not to say solemn generation' of the 1940s, whose duty it was to transform a sinful world. But it is not the fact that they made mistakes — albeit huge ones — which now seems so offensive; rather it is the fact that they thought that they alone had the answers for their time and that they refused to recognise the Original Sin. Cities and towns are flawed, like ourselves; that is what makes them interesting and enjoyable, as some architects are now at last prepared to admit. Lord Esher's generation was exasperated with the 'old guard' of between the wars for reasons which he explains; the fact that he has written this partly realistic, partly complacent book may show that he recognises that subsequent generations may not think much of his.