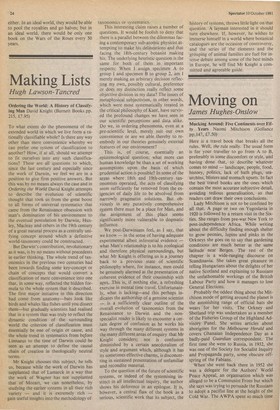 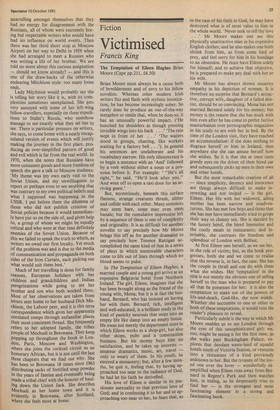 Mucking Around: Five Continents over Fifty Years Naomi Mitchison (Gollancz pp.147, £7.50) Here is a travel book that breaks all the rules. Well, the rule really. The usual form is for your traveller to go from A to B, preferably in some discomfort or style, and having done that, to describe whatever comes to mind — landscape, people, food, history, politics, lack of bath plugs, seaurchins, blisters and stomach upsets. In fact the best travel books are the ones which contain the most accurate subjective detail, avoiding tedious generalisation, so that readers can draw their own conclusions.

Lady Mitchison is not to be confined by all that. A page or two on Yugoslavia in 1920 is followed by a return visit in the Sixties. She ranges from pre-war New York to post-independence Africa. While writing about the difficulty finding enough shelter to grow peonies, lupins and pinks in the Orkneys she goes on to say that gardening conditions are much better at the same latitude near Bergen. The rest of the chapter is a wide-ranging discourse on Scandinavia. She takes great pleasure in telling Hungarians about the delights of her native Scotland and explaining to Russians the unfathomable workings of the British Labour Party and how it manages to lose General Elections.

Probably the oddest thing about the Mitchison mode of getting around the planet is the astonishing range of official hats she wears for her visits. The Orkney and Shetland trip was undertaken as a member of the Fisheries Group of the Highland Advisory Panel. She writes articles about aborigines for the Melbourne Herald and covers Ghanaian Independence Day as a badly-paid Guardian correspondent. The first time she went to Russia, in 1932, she was one of the Society for Socialist Inquiry and Propaganda party, some obscure offspring of the Fabians.

When she went back there in 1952 she was a delegate for the Authors' World Peace Appeal, an organisation which was alleged to be a Communist Front but which she says was trying to persuade the Russians to adopt a pacifist line at the height of the Cold War. The AWPA spent so much time quarrelling amongst themselves that they had no energy for disagreement with the Russians, all of whom were extremely boring but respectable writers who would have had no influence on world events. Then there was her third short stop at Moscow Airport on her way to Delhi in 1958 when she had arranged to meet a Russian who was writing a life of her brother. We are told no more about this curious assignation — should we know already? — and this is one of the draw-backs of the otherwise endearing Mitchison style: too many loose ends.

Lady Mitchison would probably say she is telling her story like it is, with its complexities sometimes unexplained. She gets very annoyed with some of her left-wing fellow-travellers, especially on these expeditions to Stalin's Russia, who somehow manage to see exactly what they set out to see. There is particular pressure on writers, she says, to come home with a neatly encapsulated version of events which will justify making the journey in the first place, producing an over-simplified pattern of good and evil which is far from the real world. In 1970, when she notes that Russians have more consumer goods and more freedom of speech she gave a talk to Moscow students: 'My theme was my own early visit to the Soviet Union, and my unwillingness to report or perhaps even to see anything that was contrary to my own political beliefs and what I supposed was happening in the USSR. I put before them the dilemma of those who did not publish criticism of Soviet policies because it would immediately have put us on the side of, and given help to, a group of whom we might be equally critical and who were at that time definitely enemies of the Soviet Union. Because of this we failed to speak the truth to which, as writers we owed our rust loyalty. Yet much of the problem was and is due to the media of communication and propaganda on both sides of the Iron Curtain, each picking out what would suit them best.'

Much of her travelling is done for family reasons, European holidays with her children and grandchildren and Indian Peregrinations while going to see her brother and son who both worked there. Most of her observations are taken from letters sent home to her husband Dick Mitchison, the Labour peer, and it is this terse correspondence which gives her apparently unrelated romps through unfamiliar places their most consistent thread. She frequently refers to her adopted family, the tribes People of Mochudi in Botswana. They keep Popping up throughout the book in London, Paris, Moscow and Washington, Where she joins the cocktail circuit as an honorary African, but it is not until the last three chapters that we find out why. She has been to Botswana 18 times since 1963 distributing sacks of fortified soup powder in the years of famine and eventually being made a tribal chief with the honour of hauling down the Union Jack. She describes Mochudi as her home town and it is evidently in Botswana, after Scotland, Where she feels most at home.