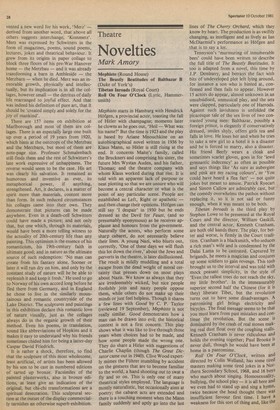 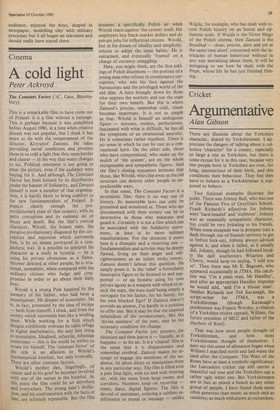 Mephisto (Round House) The Beastly Beatitudes of Balthazar B (Duke of York's) Tibetan Inroads (Royal Court) Roll On Four O'Clock (Lyric, Hammersmith) Mephisto starts in Hamburg with Hendrick HOfgen, a provincial actor, toasting the fall of Hitler with champagne; moments later he clowns as he goes out, 'Heil — What was his name?' But the time is 1923 and the play is based by Ariane Mnouchkine on an autobiographical novel written in 1936 by Klaus Mann, so Hitler is still rising at the end. It concerns Mann's family, called the Bruckners and comprising his sister, the future Mrs Wystan Auden, and his father, Thomas; and the theatre company with whom Klaus worked during that rise. It is told with an apparent lack of purpose or neat plotting so that we are unsure who will become a central character or what is the point of any particular scene. People are established as Left, Right or apathetic — and then change their opinions. HOfgen can still say 'I despair' in 1930 but he ends dressed as the Devil for Faust, (and so presumably eponymous) as he receives applause and honours from the government. Naturally the actors, who perform some sharp cabaret, do not necessarily believe their lines. A young Nazi, who blurts out, correctly, 'One of these days we will flush this lot down the river,' about the Jews and perverts in the theatre, is later disillusioned. The result is mildly muddling and a total escape from the dead weight of moral certainty that presses down on most plays about Nazis. We know as always that they are irredeemably wicked, but nice people foolishly join and nasty people oppose them, while others do not make up their minds or just feel helpless. Though it shares a few lines with Good by C. P. Taylor (reviewed 19 September), Mephisto is not really similar. Good demonstrates how a man can be drawn into evil; the historical context is not a first concern. This play shows what it was like to live through those years when choices had to be made, and how some people made the wrong one. They do share a Hitler with suggestions of Charlie Chaplin (though The Great Dictator came out in 1940). Clive Wood expertly mimes the Ftihrer stumbling by accident on the gestures that are to become familiar to the world, a hand shooting out to swat a fly and so on. This is only one of many theatrical styles employed. The language is mostly naturalistic, but occasionally aims at poetry; the cabaret acts are extended and there is a touching moment when the Mann family suddenly and aptly go into the last lines of The Cherry Orchard, which they know by heart. The production is as swiftly changing, as intelligent and as lively as Ian McDiarmid's performance as HOfgen and that is to say a lot.

Tennyson's 'murmuring of innumerable bees' could have been written to describe the full title of The Beastly Beatitudes. It too is adapted from a novel, this time by J.P. Donleavy, and betrays the fact with bits of undeveloped plot left lying around, for instance a son who is hinted at, confirmed and then fails to appear. However 15 actors do appear, almost unknown in an unsubsidised, unmusical play, and the sets were clapped, particularly one of Harrods. Against such lavishness is unfolded the picaresque tale of the sex lives of two contrasted young men: Balthazar, possibly a foreign prince, is elegantly if conservatively dressed, smiles shyly, offers girls tea and falls in love. He loses her and when he tries to take a new girl to a hotel it is a disaster and he is forced to marry, also a disaster. His friend Beefy wears a cloak and sometimes scarlet gloves, goes in for 'lewd gymnastic indecency' as often as possible and says things like 'As sure as aubergine and pink are my racing colours', or 'You could have heard a flea fart' — not quite jokes but meant to amuse. Patrick Ryecart and Simon Callow are admirably cast, but the comedy overwhelms the pathos without replacing it, so it is not sad or funny enough, when it was meant to be both.

Tibetan Inroads is the third play by Stephen Lowe to be presented at the Royal Court and the director, William Gaskill, and the central actor, Kenneth Cranham, are both old hands there. The play, for better and worse, is firmly in the Court tradition. Cranham is a blacksmith, who seduces a rich man's wife and is condemned by the Dalai Lama to be castrated. Captured by brigands, he meets a magician and conjures up some soldiers to gain revenge. This tosh brought us to the interval and was told with mock peasant simplicity, in the style of 'Even the tallest trees do not reach the sky, my little brother'. In the immeasurably superior second half the Chinese (for it is they) liberate Tibet, but the revolution turns out to have some disadvantages. A patronising girl brings electricity and bicycles. The final message seems to be that you must learn from past mistakes and continue the revolution. But the scene is dominated by the crash of real stones making real dust float over the coughing stalls. Kenneth Cranham is never ridiculous and holds the evening together; Paul Brooke is never dull, though he would have been at home in a pantomime.

Roll On Four O'Clock, written and directed by Colin Welland, has some tired masters making some tired jokes in a Northern Secondary School, 1968, and 16 boys who march about singing. Homosexuality, bullying, the school play — it is all here and we even had to stand up and sing a hymn, twice because the head thought there was insufficient fervour first time. I have a weakness for this sort of thing and, like the

audience, enjoyed the boys, draped in newspaper, modelling clay with military precision; but it all began on television and should really have stayed there.