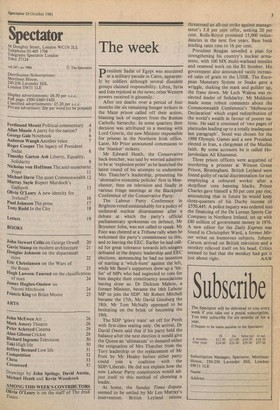 President Sadat of Egypt was murdered at a military parade in Cairo, apparently by soldiers although several dissident groups claimed responsibility. Libya, Syria and Iran rejoiced at the news; other Western powers received it gloomily.

After ten deaths over a period of four months the six remaining hunger strikers in the Maze prison called off their action, blaming lack of support from the Roman Catholic hierarchy. In some quarters their decision was attributed to a meeting with Lord Gowrie, the new Minister responsible for prisons in the Northern Irish office. Later, Mr Prior announced concessions to the `blanket' strikers.

Mr Edward Heath, the Conservative back-bencher, was said by worried admirers to be at 'explosion point' as he launched the latest round of his attempts to undermine Mrs Thatcher's leadership, presenting his `alternative economic policies' first in Manchester, then on television and finally in various fringe meetings at the Blackpool Conference of the Conservative Party.

The Labour Party Conference in Brighton voted unmistakably for a policy of unilateral nuclear disarmament after a debate at which the party's official parliamentary spokesman on defence, Mr Brynmor John, was not called to speak. Mr Foot was cheered at a Tribune rally when he welcomed the party's commitment to this, and to leaving the EEC. Earlier he had called for great tolerance towards left-wingers defeated in the deputy leadership and EEC elections, announcing he had no intention of starting a `witch-hunt' against the left, while Mr Benn's supporters drew up a 'hitlist' of MPs who had neglected to vote for him despite their constituency associations having done so. Dr Dickson Mabon, a former Minister, became the 16th Labour MP to join the SDP. Mr Robert Mitchell became the 17th, Mr David Ginsburg the 18th. Mr Tom McNally appeared to be hesitating on the brink of becoming the 19th.

The SDP `gravy train' set off for Perth with first-class seating only. On arrival, Dr David Owen said that if his party held the balance after the next election it would give the Queen an `ultimatum' to demand either the resignation of Mrs Thatcher from the Tory leadership or the replacement of Mr Foot by Mr Healey before either party could join a coalition with the SDP/Liberals. He did not explain how the new Labour Party constitution would adjust itself to this method of choosing a leader.

At home, the Sunday Times dispute seemed to be settled by Mr Len Murray's intervention. British Leyland unions threatened an all-out strike against management's 3.8 per cent offer, seeking 20 per cent. Rolls-Royce promised 15,000 redundancies in the next five years. Base bank lending rates rose to 16 per cent.

President Reagan unveiled a plan for strengthening his country's nuclear armament, with 100 MX multi-warhead missiles and renewed work on the B1 bomber. His government also announced vastly increased sales of grain to the USSR. The European Monetary System or Snake gave a wriggle, shaking the mark and guilder up, the franc down. Mr Lech Walesa was reelected leader of Solidarity. Mr Muldoon made some robust comments about the Commonwealth Conference's `Melbourne Declaration' which urged redistribution of the world's wealth in favour of poorer nations. He said it consisted of 'two pages of platitudes leading up to a totally inadequate last paragraph'. Seoul was chosen for the 1988 Olympic Games and a new President elected in Iran, a clergyman of the Muslim faith. By some accounts he is called Hojaroleslam Ali Khamenei.

Three prison officers were acquitted of murdering a prisoner at Winson Green Prison, Birmingham. British Leyland were found guilty of racial discrimination for not employing a coloured worker after a shopfloor vote banning blacks. Prince Charles gave himself a 50 per cent pay rise, announcing that in future he would keep -three-quarters of his Duchy income of £550,445. A police inquiry was ordered into the financing of the De Lorean Sports Car Company in Northern Ireland, set up with £80 million of government money in 1976. A new editor for the Daily Express was found in Christopher Ward, a former Mirror writer on humorous subjects. Johnny Carson arrived on British television and a monkey relieved itself on his head. Critics seemed to feel that the monkey had got it just about right. AAW