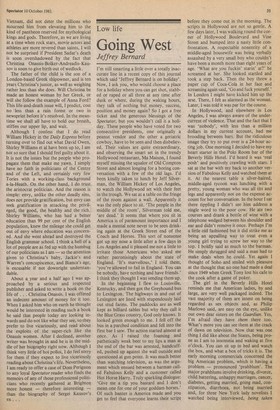 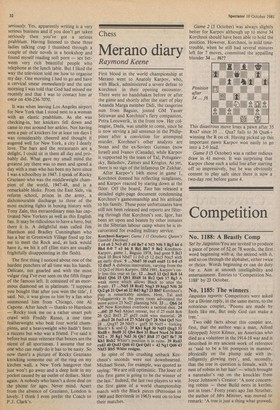 I'm still smarting a little over a totally inaccurate line in a recent copy of this journal which said 'Jeffrey Bernard is on holiday'. Now, I ask you, who would choose a place for a holiday where you can get shot, stabbed or raped or all three at any time after dusk or where, during the waking hours, they talk of nothing but money, success, position and money again? So I got a free ticket and the generous blessings of the Spectator, but you wouldn't call it a holiday. These people who have voted for two consecutive presidents, one originally a peanut vendor and the other a geriatric cowboy, have to be seen and then disbelieved. Their values are quite extraordinary, and observing the smart set in the trendy Hollywood restaurant, Ma Maison, I found myself missing the squalor of Old Compton Street and almost longing for a boring conversation with a few of the old lags. I'd been kindly taken to lunch by Jeff Silverman, the William Hickey of Los Angeles, to watch the Hollywood set with their feet in the trough. We sat at a table on the fringe of the room against a wall. Apparently it was the only place to sit. 'The people in the middle of the room', Silverman told me, 'are dead.' It seems that where you sit in America is of paramount importance and I made a mental note never to be seen drinking again at the Greek Street end of the Coach and Horses. This sort of nonsense got up my nose a little after a few days in Los Angeles and it pleased me not a little to irritate those Americans who asked me rather patronisingly about the state of England. It's marvellous,' I told them, 'you're allowed to fail in England. You can be nobody, have nothing and have friends.' I think they thought I was sending them up.

In the beginning I flew to Louisville, Kentucky, and then got the Greyhound bus to Lexington. The highways in and out of Lexington are lined with stupendously laid out stud farms. The paddocks are as well kept as billiard tables but why they call it the Blue Grass country, God only knows. It looked green enough to me. I fell off the bus in a parched condition and fell into the first bar I saw. The action started almost at once. As I raised the foaming and pathetically weak beer to my lips a man at the end of the bar was arrested, handcuffed, pushed up against the wall outside and questioned at gun point. It was much better than watching television, as was the argument which ensued between a barman called Fabulous Kelly and a customer called Hot Horse Harry. Truly sparkling dialogue: 'Give me a tip you bastard and I don't mean one for one of your goddam horses.' Of such banter is America made and you get to feel that everyone learns their script before they come out in the morning. The scripts in Hollywood are not so gentle. A few days later, I was walking round the corner of Hollywood Boulevard and Vine Street and bumped into a nasty little confrontation. A respectable nonentity of a middle-aged housewife was being verbally assaulted by a very small boy who couldn't have been a month more than eight years of age. 'What are you fuckin' starin' at?' he screamed at her. She looked startled and took a step back. Then the boy threw a paper cup of Coca-Cola in her face and screaming again said, 'Go and fuck yourself.' In London I might have kicked him up the arse. There, I felt as alarmed as the woman. Later, I was told it was par for the course.

In Hollywood, and elsewhere in Los Angeles, I was always aware of the undercurrent of violence. That and the fact that I was 'nobody', with less than a million dollars in my current account, had me brooding between bars. But the ridiculous image they try to put over is a 24-hour acting job. One morning I decided to have my heart starter in the Polo Room bar of the Beverly Hills Hotel. I'd heard it was 'real posh' and positively crawling with stars. I sat at the bar with my back to another version of Fabulous Kelly and watched them at it. At the nearest table a silver-haired, middle-aged tycoon was lunching with a pretty, young woman who was all tits and legs and apparently not on the expense account for her conversation. In the hour I sat there tippling I didn't see him address a single word to the poor cow. He ate two courses and drank a bottle of wine with a telephone wedged between his shoulder and ear and didn't remove it once. Perhaps I'm a little old fashioned but it did strike me as being an appalling way to treat even a young girl trying to screw her way to the top. I boldly said as much to the barman. He simply shrugged and said a man had to make deals when he could. Yet again I thought of Soho and smiled with pleasure at the thought that no one had made a deal since 1949 when Greek Tony lost his cafe to the cook after a game of poker.

The girl in the Beverly Hills Hotel reminds me that American ladies, by and large, are very well packaged indeed. The vast majority of them are intent on being regarded as sex objects and, as Philip Marlowe said, are easy on the eye, unlike our own dear sisters on the Guardian. Yes, I'm afraid they have them there too. What's more you can see them at the crack of dawn on television. Now that was one thing I did like about the States, being prone as I am to insomnia and waking at five o'clock. You can sit up in bed and watch the box, and what a box of tricks it is. The early morning commercials concerned the big American problem, which is having a problem — pronounced 'prahblum'. The major prahblums involve drinking, divorce, child battering, unhappy marriages, cancer, diabetes, getting married, going mad, constipation, diarrhoea, not being married and, for three New York lady novelists I watched being interviewed, being taken seriously. Yes, apparently writing is a very serious business and if you don't get taken seriously then you've got a serious prahblum. Having listened to these three ladies talking crap I thumbed through a couple of their novels in a bookshop and found myself reading soft porn — sex between very rich beautiful people who telephone at the lunch table. But I liked the way the television told me how to organise my day. One morning I had to go and have a cervical smear immediately and the next morning I was told that God had missed me recently and that I was to contact him at once on 436-236-7070.

It was when leaving Los Angeles airport for New York that I stood next to a woman with an elastic prahblum. As she was checking-in, her knickers fell down and came to rest around her ankles. Not having seen a pair of knickers for at least ten days I was considerably cheered and thought it augered well for New York, a city I dearly love. The bars and the restaurants are a delight, I could sit in them all day and probably did. What gave my small mind the greatest joy there was to meet and spend a day with a man who has been my hero since I was a schoolboy in 1947. I speak of Rocky Graziano who was the middleweight champion of the world, 1947-48, and is a remarkable bloke. From the East Side, via reform school, prison in the army, a dishonourable discharge to three of the most exciting fights in boxing history with Tony Zale, this extraordinary man has captivated New Yorkers as well as this English fan. It may be ridiculous to have a hero, but there it is. A delightful man called Jim Harelson and Bradley Cunningham who has a bar in Greenwich Village fixed up for me to meet the Rock and, as luck would have it, we hit it off (film stars are usually frightfully disappointing in the flesh).

The first thing I noticed about one of the hardest punchers of all time was his hands. Delicate, not gnarled and with the most vulgar ring I've ever seen on the fifth finger of the famous left. It consisted of an enormous diamond set in platinum. 'I suppose you bought that after you won the title', I said. No, it was given to him by a fan who summoned him from Chicago, one Al Capone. After lunch — thanks to Harelson — Rocky took me on a rather smart pub crawl with Freddy Russo, a one time featherweight who beat four world champions, and a heavyweight who hadn't been a success but who was a friend. I've said it before but must reiterate that boxers are the nicest of all sportsmen. I assume that no one who can really do it has to be nasty. So now there's a picture of Rocky Graziano knocking someone out of the ring on my kitchen wall, a New York hangover that just won't go away and a deep hole in my pocket caused by an outlet of dollars. Skint again. A nobody who hasn't a done deal on the phone for ages. Never mind. Apart from the absence of Graziano, London is lovely. I think I even prefer the Coach to P.J. Clark's.