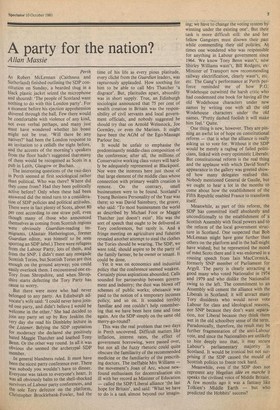 A party for the nation?

Perth As Robert McLennan (Caithness and Sutherland) finished outlining the SDP constitution on Sunday, a bearded thug in a black plastic jacket seized the microphone and shouted: 'The people of Scotland want nothing to do with this London party'. For a moment before his ejection apprehension shivered through the hall. Few there would be comfortable with violence of any kind, not even verbal perhaps, and many just must have wondered whether his boast might not be true. 'Will there be any natives?' had been the London response to an invitation to a ceilidh the night before, and the accents of the morning's speakers from the floor hadn't suggested that.many of them would be recognised as Scots in a pub in Leith, Glasgow or Buchan.

The interesting questions of the two days in Perth seemed at first sociological rather than political. Who was there? Where did they come from? Had they been politically active before? Only when these had been answered did the mind, turn to a consideration of SDP policies and political attitudes. There were in fact plenty of Scots, about 80 per cent according to one straw poll, even though many of those who announced themselves as coming from Scottish regions were obviously Guardian-reading immigrants. (Alastair Hetherington, former Guardian editor, was himself to be seen Sporting an SDP label.) There were refugees from the Labour Party, lots of them, and from the SNP. I didn't meet any renegade Scottish Tories, but Scottish Tories are thin enough on the ground anyway; you could easily overlook them. I encountered one exTory from Shropshire, and when Shropshire starts defecting the Tory Party has cause to worry.

But there were more who had never belonged to any party. An Edinburgh advocate's wife said: 'I could never have joined one party, and didn't believe I would be welcome in the other.' She had decided to Join any party set up by Roy Jenkins the very day she read his Dimbleby lecture in the Listener. Belying the SDP reputation for moderacy she declared she positively hated Maggie Thatcher and loathed Tony Benn. Or the other way round. In all it was Obvious she seemed the archetypal SDP Member.

In general blandness ruled. It must have been the nicest party conference ever. There was nobody you wouldn't have to dinner. Everyone was taken to everyone's heart. It was all obviously balm to the shell-shocked survivors of Labour party conferences, and the sole Tory defector on the platform, Christopher Brocklebank-Fowler, had the time of his life as every pious platitude, every cliche from the Guardian leaders, was rapturously applauded. How soothing for him to be able to call Mrs Thatcher 'a disgrace'. But, platitudes apart, absurdity was in short supply. True, an Edinburgh sociologist announced that 75 per cent of wealth creation in Britain was the responsibility of civil servants and local government officials, and nobody suggested he should try that on Arnold Weinstock, Joe Gormley, or even the Marines. It might have been the AGM of the Ego-Massage Parlour Inc.

It would be unfair to emphasise the predominantly middle-class composition of the conference; after all, the millions of Conservative working class voters will hardly be adequately represented at Blackpool. Nor were the interests here just those of that large element of the middle class whose connection with primary wealth creation is remote. On the contrary, small businessmen were to be found. Scotland's Young Business Personality of the Year was there; so was David Sainsbury, the grocer, who said: `To most businessmen the world as described by Michael Foot or Maggie Thatcher just doesn't exist'. His was the sort of speech that ought to be delivered at Tory conferences, but rarely is. And a fringe meeting on agriculture and fisheries revealed another attempt to steal the clothes the Tories should be wearing. The SDP, we were told, should aspire to be the party of the family farmer, be he owner or tenant. It could be done.

Yet it was on economics and industrial policy that the conference seemed weakest. Certainly pious aspirations abounded. Calls sounded for partnership between government and industry; the dust was blown off schemes of public works; obeisance was paid to the notion of a temporary incomes policy; and so on. It sounded terribly familiar and one couldn't help remembering that we have been here time and time again. Are the SDP simply on the same old merry-go-round?

This was the real problem that two days in Perth uncovered. Difficult matters like inflation, interest rates, the effect of government borrowing, were passed over, but not all the fuzzy rhetoric could quite obscure the familiarity of the recommended medicine or the familiarity of the prescribing doctors. The ineffable Mrs Williams — the movement's Joan of Arc, whose newfound enthusiasm for decentralisation sits ill with her record as Minister of Education — called the SDP/Liberal alliance 'the last hope for Britain', and said: 'What we have to do is a task almost beyond our imagin ing; we have to change the voting system by winning under the existing one'. But their task is more difficult still: she and her fellow Gangsters must disown their past while commending their old policies. At times one wondered who was responsible for anything in Labour government since 1964. We know Tony Benn wasn't, now Shirley Williams wasn't, Bill Rodgers, exMinister of Transport now recommending railway electrification, clearly wasn't, etc. etc. The Gang's performance at Perth perforce reminded me of how P.G. Wodehouse outwitted the harsh critic who had condemned one book for having all the old Wodehouse characters under new names by writing one with all the old Wodehouse characters under the old names. 'Pretty dashed foolish it will make him feel.' Quite.

One thing is new, however. They are pinning an awful lot of hope on constitutional reform — that is what the alliance is really asking us to vote for. Without it the SDP would be merely a ragbag of failed politicians, linked with every optimistic Liberals. But constitutional reform is the real thing and the applause with which David Steel's appearance in the gallery was greeted showed how many delegates realised this. Nobody mentioned General de Gaulle, but we ought to hear a lot in the months to come about how the establishment of the Fifth Republic enabled France to transform itself.

Meanwhile, as part of this reform, the SDP has committed itself absolutely and unconditionally to the establishment of a Scottish Assembly with fiscal powers and to the reform of the local government structure in Scotland. One suspected that Bob McLennan might have gone further than others on the platform and in the hall might have wished; but he represented the mood of mbst Scots there and it was endorsed in a rousing speech from lain MacCormick, formerly SNP member of Parliament for Argyll. The party is clearly attracting a good many who voted Nationalist in 1974 and 1979 and who dislike the Nationalist swing to the left. The commitment to an Assembly will cement the alliance with the Liberals in Scotland; it will attract many Tory dissidents who would never vote Labour for class and ideological reasons, nor SNP because they don't want separation, nor Liberal because they think them wet in the old schoolboy sense of the term. Paradoxically, therefore, the result may be further fragmentation of the anti-Labour vote, and since the Nationalists are unlikely to bite deeply into that, it may secure Labour's parliamentary majority in Scotland. It would be ironical but not surprising if the SDP caused the mould of Scottish politics to freeze rock hard.

Meanwhile, even if the SDP does not represent any Hegelian idee en marche it speaks the civilised voice of Middle Britain. A few months ago it was a fantasy like Tolkien's Middle Earth — but who predicted the Hobbits' success?