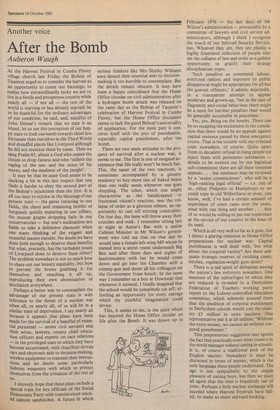 At the Harvest Festival in Combe Florey Village church last Friday the Bishop of Taunton urged us to consider the harvest as an opportunity to count our blessings, to realise how extraordinarily lucky we are to live in a fertile and prosperous country while nearly all — if not all — the rest of the world is starving or has already starved; let us be thankful for the ordinary advantages of our condition, he said, and, mindful of John Donne's remark that no man is an island, let us use this perception of our happy state to look outwards towards those less fortunate than ourselves in the Third World and dreadful places like Liverpool although he did not mention them by name. Then we sang Psalm 65, about a God who causes the Clouds to drop fatness and who `stilleth the raging of the sea: and the noise of his waves, and the madness of the people'.

It may be that be:ause God seems to be slacking a bit in this last respect that one finds it harder to obey the second part of the Bishop's injunction than the first. It is all too easy to rejoice in the blessings of our present state — the geese fattening in our fields, the claret and remaining bottles of burgundy quietly maturing in our cellars, the muscat grapes dropping fatly in our conservatories — but one's meditations are liable to take a defensive character when one starts thinking of the exigent and resentful masses outside. No doubt we have done little enough to deserve these benefits but what, precisely, has the turbulent youth of Liverpool done to deserve them either? The problem nowadays is not so much how to share out our bounty equitably, but how to prevent the brutes grabbing it for themselves and smashing it all up, reproducing their own abomination of desolation everywhere.

Perhaps a better way to contemplate the advantage of our present state is with reference to the threat of a nuclear war When all, or nearly all, of us will be in a similar state of deprivation. I say nearly all because it appears that plans have been made for the survival of a handful of essential personnel — senior civil servants and their wives, lawyers, county chief education officers and experts on race relations — in the privileged state to which they have become accustomed, with chauffeur-driven cars and electronic aids to decision-making, wireless equipment to transmit their instructions and no doubt some particularly hideous weaponry with which to protect themselves from the irritation of the rest of us.

I sincerely hope that these plans include a special train for key officials of the Social Democratic Party with transistorised smoked salmon sandwiches. A future in which serious thinkers like Mrs Shirley Williams were denied their essential aids to decisionmaking is too horrible to contemplate. But the details remain obscure. It may have been a happy coincidence that the Home Office circular on civil administration after a hydrogen bomb attack was released on the same day as the Bishop of Taunton's celebration of Harvest Festival in Combe Florey, but the Home Office document seems to lack the good Bishop's universality of application. For the most part it concerns itself with the joys of punishment, especially capital punishment, after the bomb.

There are two main attitudes to the prospect of survival after a nuclear war, it seems to me. The first is one of resigned acceptance that life really won't be much fun. This, the saner of the two reactions, is sometimes accompanied by a gloomy tendency to buy more tins of baked beans than one really needs whenever one goes shopping. The other, which one might characterise as the handicapped or frustrated citizen's reaction, sees the collapse of order as a glorious release, an opportunity to cast off existing constraints. On that day, the lame will throw away their crutches and walk. I remember sitting late at night in Annie's Bar with a senior Cabinet Minister in Mr Wilson's government who told me that on that day he would take a female left-wing MP whom he named into a secret room underneath Big Ben and after three days and nights of lasciviousness with her he would come down and go into the Chamber with a tommy-gun and shoot all his colleagues on the Government front bench. In the same way I remember as a boy at Downside that whenever it snowed, I fondly imagined that the school would be completely cut off, affording an opportunity for every outrage which my youthful imagination could devise.

This, it seems to me, is the spirit which has inspired the Home Office circular on life after the Bomb. It was drawn up in February 1976 — the last days of Mr Wilson's administration — presumably by a committee of lawyers and civil service administrators, although I think I recognise the touch of our beloved Security Service, too. Whoever they are, they are plainly a highly frustrated collection of people who see the collapse of law and order as a golden opportunity to gratify their strange disciplinarian urges.

'Such penalites as communal labour, restricted rations and exposure to public disapproval might be appropriate for all but the gravest offences,' it admits dejectedly, in a transparent attempt to appear moderate and grown-up, 'but in the case of flagrantly anti-social behaviour there might be a need for harsher penalties than would be generally acceptable in peacetime.'

Yes, yes. Bring on the bombs. There can be no escaping the excitement in the conclusion that there would be no appeals against capital sentence passed by these emergency courts. That is the trouble with our criminal code nowadays, of course. Quite apart from its decadent refusal to hang people (or inject them with poisonous substances — details to be worked out by our logistical sub-committee) there are all these tiresome appeals . . . but sentences may be reviewed by a 'senior commissioner', who will be a 'high-ranking legal official' — i.e. one of us, either Philpotts or Humphreys or we could rope in old Wilberforce or even, you know, well, I've had a certain amount of experience of court cases over the years, what with one thing and another . . . Any of us would be willing to put our experience at the service of our country in the hour of its need.

Which is all very well so far as it goes, but I detect a glaring omission in Home Office preparations for nuclear war. Capital punishment is well dealt with, but what about the corporal variety? Are there adequate strategic reserves of swishing canes, birches, regulation-weight gym shoes?

There is a sad spirit of defeatism among the nation's law enforcers nowadays. One measure of the subterfuges to which they are reduced is revealed in a Derbyshire Federation of Teachers working party report to the Labour-controlled education committee, which solemnly assured them that the abolition of corporal punishment in Derbyshire schools would cost the country £3 million in extra teachers. One representative put it at £6 million. 'Without the extra money, we cannot do without corporal punishment.'

This preposterous suggestion may ignore the fact that practically every other country in the world manages without caning in schools. It is, of course a traditional perk of the English teacher. Nowadays it must be discussed in terms of money, which is the only language these people understand. The age is not sympathetic to the simple pleasure of caning boys, but then we must all agree that the time is hopelessly out of Joint. Perhaps a little nuclear exchange will succeed where Harvest Festivals have failed, to make us more outward-looking.