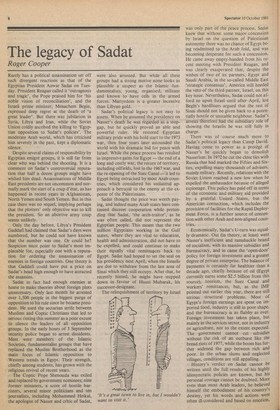 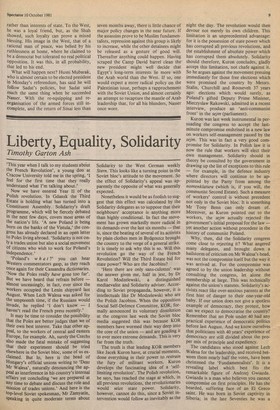 The legacy of Sadat

Rarely has a political assassination set off such divergent reactions as that of the Egyptian President Anwar Sadat on Tuesday. President Reagan called it 'outrageous and tragic', the Pope praised him for 'his noble vision of reconciliation', and the Israeli prime minister, Menachem Begin, expressed deep regret at the death of 'a great leader'. But there was jubilation in Syria, Libya and Iran, while the Soviet Union coldly ascribed the killing to 'Egyptian opposition to Sadat's policies'. The moderate Arab world, which has criticised him severely in the past, kept a diplomatic silence.

Despite several claims of responsibility by Egyptian emigit groups, it is still far from clear who was behind the shooting. It is a comment on Sadat's controversial reputation that half a dozen groups might have wished him dead. Assassinations of Middle East presidents are not uncommon and normally mark the start of a coup d'etat, as has happened in recent years in Afghanistan, North Yemen and South Yemen. But in this case there was no sequel, implying perhaps that the plotters' only objective was to kill the president. So an abortive army coup seems unlikely.

Only the day before, Libya's President Gaddafi had claimed that Sadat's days were numbered, but he could not have known that the number was one. Or could he? Suspicion must point to Sadat's most implacable foe, especially one with a reputation for ordering the assassination of enemies in foreign countries. One theory is that Gaddafi could have put a price on Sadat's head high enough to have attracted the assassins.

Sadat in fact had enough enemies at home to make theories about foreign plots unnecessary. Only last month he arrested over 1,500 people in the biggest purge of opposition to his rule since he became president. He used the sectarian strife between Muslims and Coptic Christians that led to serious rioting this summer as a poor excuse to silence the leaders of all opposition groups. In the early hours of 3 September security police began to arrest dissidents. Most were members of the Islamic Societies, fundamentalist groups that have replaced the Muslim Brotherhood as the main focus of Islamic opposition to Western trends in Egypt. Their strength, chiefly among students, has grown with the religious revival of recent years.

The Coptic Pope Shenouda was exiled and replaced by government nominees; nine former ministers, a score of hostile barristers, several minor politicians and ten journalists, including Mohammed Heikal, the apologist of Nasser and critic of Sadat, were also arrested. But while all these groups had a strong motive none looks as plausible a suspect as the Islamic fundamentalists, young, organised, militant and known to have cells in the armed forces. Martyrdom is a greater incentive than Libyan gold.

Sadat's political legacy is not easy to assess. When he assumed the presidency on Nasser's death he was regarded as a stopgap, but he quickly proved an able and powerful ruler. He restored Egyptian military pride with his bold start to the 1973 war, then four years later astounded the world with his dramatic bid for peace with Israel. While the peace process has resulted in impressive gains for Egypt — the end of a long and costly war, the return of territory, including oilfields, lost in the 1967 war, and the re-opening of the Suez Canal -it led to Egypt being ostracised by most Arab countries, which considered his unilateral approach a betrayal to the enemy at the expense of the Palestinians.

Sadat thought the price was worth paying, and indeed many Arab states have continued discreet cooperation while pretending that Sadat, `the arch-traitor', as he was often called, did not represent the Egyptian people. This meant that the two million Egyptians working in the Gulf states, where they are vital to education, health and administration, did not have to be expelled, and could continue to make their equally vital remittances back to Egypt. Sadat had hoped to set the seal on his presidency next April, when the Israelis are due to withdraw from the last area of Sinai which they still occupy. After that, he recently hinted, he might have stepped down in favour of Husni Mubarak, his successor-designate.

The relinquishment of territory by Israel was only part of the peace process. Sadat knew that without some major concession by Israel on the question of Palestinian autonomy there was no chance of Egypt being readmitted to the Arab fold, and was becoming desperate for such a concession. He came away empty-handed from his recent meeting with President Reagan, and was clearly exasperated that, despite the wishes of two of its partners, Egypt and Saudi Arabia, in the so-called Middle East `strategic consensus', America still heeded the veto of the third partner, Israel, on this key issue. Nevertheless, Sadat could not afford to upset Israel until after April, lest Begin's hardliners argued that the rest of Sinai should not be given back to a potentially hostile or unstable neighbour. Sadat's arrests therefore had the subsidiary role of showing the Israelis he was still fully in charge.

There was of course much more to Sadat's political legacy than Camp David. Having come to power as a protégé of Nasser's he quickly began to demolish Nasserism. In 1972 he cut the close ties with Russia that had marked the Fifties and Sixties, expelling many thousands of advisers, mainly military. Recently, relations with the Soviet Union reached a new low when he expelled the ambassador because of alleged espionage. This policy has paid off in terms of the economic and military aid provided by a grateful United States, but the American connection, which includes the provision of facilities for the Rapid Deployment Force, is a further source of contention with other Arab and non-aligned countries.

Economically, Sadat's U-turn was equally dramatic. Out (in theory, at least) went Nasser's inefficient and ramshackle brand of socialism, with its massive subsidies and bureaucracy, and in came the 'open-door' policy for foreign investment and a greater degree of private enterprise. The balance of payments is certainly far healthier than a decade ago, chiefly because of oil (Egypt currently earns some $2.5 billion from this source), .tourism, the Suez Canal and workers' remittances, but, as the IMF pointed out earlier this year, there are still serious structural problems. Most of Egypt's foreign earnings are spent on imported food, industry is still in poor shape, and the bureaucracy is as flabby as ever. Foreign investment has taken place, but mainly in the services sector, not in industry or agriculture, nor to the extent expected. The government cannot cut subsidies without the risk of an outburst like the bread riots of 1977, while the boom has further widened the gap between rich and poor. In the urban slums and neglected villages, conditions are still appalling. History's verdict on Sadat cannot be written until the full results of his highly idiosyncratic policies are known, but his personal courage cannot be doubted. More even than most Arab leaders, he believed himself the embodiment of his country's destiny, yet his words and actions were often ill-considered and based on emotion, rather than interests of state. To the West, he was a loyal friend, but, as the Shah showed, such loyalty can prove a mixed blessing. His image in the West, that of a rational man of peace, was belied by his ruthlessness at home, where he claimed to be a democrat but tolerated no real political Opposition. It was this, in all probability, that led to his end.

What will happen next? Husni Mubarak, who is almost certain to be elected president in Monday's referendum, has said he will follow Sadat's policies, but Sadat said much the same thing when he succeeded Nasser. With the re-equipping and reorganisation of the armed forces still incomplete, and the return of Sinai less than seven months away, there is little chance of major policy changes in the near future. If the assassins prove to be Muslim fundamentalists, repression against this group is likely to increase, while the other detainees might be released as a gesture of good will. Thereafter anything could happen. Having scraped the Camp David barrel clean the new president might well decide that Egypt's long-term interests lie more with the Arab world than the West. If so, one would expect a more radical policy on the Palestinian issue, perhaps a rapprochement with the Soviet Union, and almost certainly an attempt to recapture the mantle of Arab leadership that, for all his blunders, Nasser once wore.