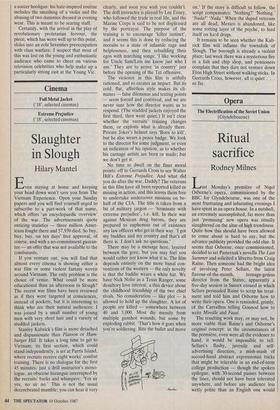 Even staying at home and keeping your head down won't save you from The Vietnam Experience. Open your Sunday papers and you will find yourself urged to subscribe to a part-work of that name, which offers 'an encyclopaedic overview' of the war. The advertisements quote enticing statistics — three million Amer- icans fought there and 57,939 died. So buy, buy, buy, on ten days' free approval, of course, and with a no-commitment guaran- tee — an offer that was not available to the combatants.

If you venture out, you will find that almost every cinema is showing either a war film or some violent fantasy woven around Vietnam. The only problem is the choice of venue. What could be more educational than an afternoon in Slough? The recent war films have been reviewed as if they were targeted at consciences, instead of pockets, but it is interesting to think who are their natural audiences: I was joined by a small number of young men with very short hair and a variety of studded jackets.

Stanley Kubrick's film is more detached and dispassionate than Platoon or Ham- burger Hill. It takes a long time to get to Vietnam; its first section, which could stand independently, is set at Parris Island, where recruits receive eight weeks' combat training. There is no dialogue for the first 45 minutes, just a drill instructor's mono- logue, an obscene harangue interrupted by the recruits' barks and whimpers: 'Yes sir yes, no sir no.' This is not the usual decerebrated mumble; you can hear it very clearly, and soon you wish you couldn't. The drill instructor is played by Lee Erney, who followed the trade in real life, and the Marine Corps is said to be not displeased by the portrayal. The purpose of the training is to encourage 'killer instinct', and it seems this is done by reducing the recruits to a state of infantile rage and helplessness, and then rebuilding their egos with marching songs: 'I like working for Uncle Sam/Lets me know just who I am.' They are to arrive 'in country' just before the opening of the Tet offensive.

The violence in this film is artfully rationed, and so creates an impact. But its cold, flat, affectless style makes its cli- maxes — false dilemmas and testing points — seem forced and contrived, and we are never sure how the director wants us to respond. (The studded jackets enjoyed the first third, then went quiet.) It isn't clear whether the recruits' training changes them, or exploits what is already there. Private Joker's helmet says 'Born to kill', but he also wears a peace badge. We look to the director for some judgment, or even an indication of his opinion, as to whether his carnage artists are born or made; but we don't get it.

No time to dwell on the finer moral points: off to Gerrards Cross to see Walter Hill's Extreme Prejudice. And what did you do after the war, Daddy? The veterans in this film have all been reported killed or missing in action, and this leaves them free to undertake undercover missions on be- half of the CIA. The title is taken from a bit of military jargon — 'terminate with extreme prejudice', i.e. kill. In their war against Mexican drug barons, they are prepared to euphemise out of existence any law officers who get in their way. 'I got my buddies and my country and that's all there is. I don't ask no questions.'

There may be a message here, layered between the gore, but you may feel you would rather not know what it is. The film depends entirely on the more banal con- ventions of the western — the only novelty is that the baddie wears a white hat. We have Nick Nolte as a Texas Ranger, some desultory love interest, a thin device about the childhood friendship of the two chief rivals. No consideration — like plot — is allowed to hold up the slaughter. A lot of people are killed — somewhere between 40 and 5,000. Most die messily from multiple gunshot wounds, but some by exploding rabbit. 'That's how it goes when you're soldiering. Bite the bullet and move on.' If the story is difficult to follow, the script compensates: 'Nothing?' Nothing.' Wada?"Alada.' When the duped veterans are all dead, Mexico is abandoned, like some rotting layer of the psyche, to feed itself on hard drugs.

It remains to be seen whether the Kub- rick film will inflame the townsfolk of Slough. The borough is already a violent place: last week there was a mysterious fire in a fish and chip shop, and pensioners complain that they dare not venture down Eton High Street without walking sticks. In Gerrards Cross, however, all is quiet. . . so far.