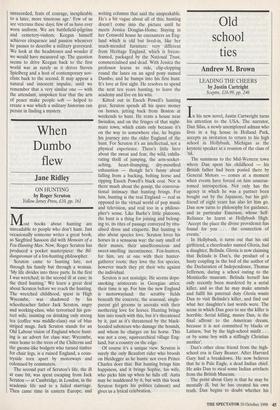 ON HUNTING by Roger Scruton Yellow Jersey Press, £10, pp. 161 Most books about hunting are unreadable to people who don't hunt. Just occasionally someone writes a great book, as Siegfried Sassoon did with Memoirs of a Fox-Hunting Man. Now, Roger Scruton has produced a pocket masterpiece: the Bil- dungsroman of a fox-hunting philosopher.

Scruton came to hunting late, not through his family but through a woman. 'My life divides into three parts. In the first I was wretched; in the second ill at ease; in the third hunting.' We learn a great deal about Scruton before we reach the hunting. The wretched childhood, spent in High Wycombe, was shadowed by his schoolteacher father Jack Scruton, angry and working-class, who terrorised his gen- teel wife, insisting on drinking only strong tea (coffee was middle-class) out of blue striped mugs. Jack Scruton stands for an Old Labour vision of England where hunt- ing is an advert for class war; Wycombe, once home to the trees of the Chilterns and the gnome-like bodgers who turned timber for chair legs, is a ruined England, a coun- tryside torn apart by motorways and colonised by commuters.

The second part of Scruton's life, the ill at ease bit, was spent escaping from Jack Scruton — at Cambridge, in London, in the academic life and in a failed marriage. Then came time in eastern Europe, and writing columns that said the unspeakable. He's a bit vague about all of this; hunting doesn't come into the picture until he meets Jessica Douglas-Home. Staying in her Cotswold house he encounters an Eng- land which is old but lived-in, like her much-mended furniture: very different from Heritage England, which is freeze- framed, packaged by the National Trust, commercialised and dead. With Jessica the professor learns to ride, clip-clopping round the lanes on an aged pony named Dumbo, and he bumps into his first hunt. It's love at first sight. He resolves to spend the next ten years hunting, to leave the academy and live on his wits.

Kitted out in Enoch Powell's hunting gear, Scruton spends all his spare money on horses, jetting back from Boston at weekends to hunt. He rents a house near Swindon, and on the fringes of that night- mare town, which exists only because it's on the way to somewhere else, he begins his journey into the older England of the hunt. For Scruton it's an intellectual, not a physical experience. There's little here about the sweat and fear, the wild, exhila- rating thrill of jumping, the arm-socket- aching, heart-thumping, dry-mouthed exhaustion — though he's funny about falling from a bucking, bolting horse and ripping Enoch Powell's black coat. Nor is there much about the gossip, the conversa- tional intimacy that hunting brings. For him, hunting is the real England — real as opposed to the virtual world of pop music and television, and real too in a philoso- pher's sense. Like Burke's little platoons, the hunt is a thing for joining and belong- ing to, its rites of passage conveyed by ritu- alised dress and etiquette. But hunting is also about species love. Scruton loves his horses in a sensuous way: the oaty smell of their manes, their unselfconscious and sweet-smelling incontinence. Fox-hunters, for him, are at one with their hunter- gatherer roots; they love the fox species, however much they pit their wits against the individual.

Scruton is not nostalgic. He scorns dope- smoking aristocrats in Georgian attics; their time is up. For him the new England is motorwayland: the scrubby fields beneath the concrete, the seasonal, single- parent girl grooms in anoraks with their mothering love for horses. Hunting brings him into touch with this, but it's threatened by it, just as it's threatened by the black- hooded saboteurs who damage the hounds, and whom he charges on his horse. This was not a cosy, squirearchical village Eng- land, but a country on the edge.

Of course it's a unique view. Scruton is surely the only Beaufort rider who broods on Heidegger as he hunts: not even Prince Charles does that. But hunting brings him happiness, and it brings Sophie, his wife, who picks him up when he falls off. Antis may be maddened by it, but with this book Scruton forgets his politics (almost) and gives us a lyrical celebration.