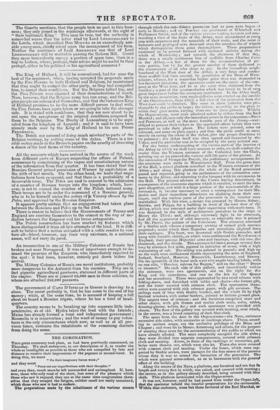 Page 5, 10 September 1831 — The government of CAPO D'ISTRIAS in Greece is drawing to
Close

The government of CAPO D'ISTRIAS in Greece is drawing to

a close. The secret probably is, that he has come to the end of his money ; while, at the same time, he is accused of keeping a full chest on board a Russian frigate, where he has a kind of head- quarters. The country seems to be breaking up into separate little inde-. pendencies, as of old. Hydra takes the lead with the Islands ; Maina has already formed a local and independent government ; Roumelia is in insurrection ; and the want of money to pay volun- teers is the only circumstance which now, as well as at all pre- vious times, restrains the inhabitants of the remaining, districts from doing the same.