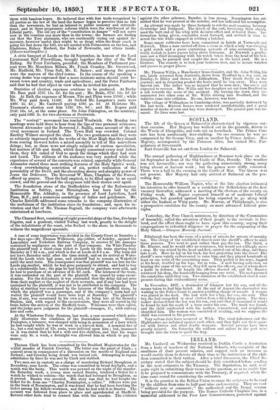 The life of the Queen at Balmoral is characterized by vigorous out- door exercise. Her Majesty has walked out in the grounds, driven to the Woods of Abergeldie and rode out on horseback. The Prince Con- sort has been assiduously deer-stalking. On one occasion he was ac- companied by Sir George Grey, and on another by Prince Arthur. Her Majesty, accompanied by the Princess Alice, has visited Mrs. Far- quharson at Invercauld.

Earl Granville has set out from London for Balmoral.

The annual gathering of Highlandmen at Braemar took place on the 1st September in front of the Old Castle of Mar, Deeside. The weather was not favourable ; nor was the gathering numercially strong, many being absent at harvest work ; but the games were stiffly contested. There was a ball in the evening in the Castle of Mar. The Queen was not present. Her Majesty had only arrived at Balmoral on the pre- ceding day.

The Honourable William Napier, who at the late election intimated his intention to offer himself as a candidate for Selkirkshire at the first vacancy thereafter, addressed a meeting of the electors of the cclunty on Friday week. Mi.. Napier expressed himself as of moderate Liberal principles, but guarded against his being expected to go along with either the Radical or Whig party. Mr. Murray, of Philiphaugh, is also a prospective candidate for the county on more advanced Liberal prin- ciples.

Yesterday, the Free Church ministers, by direction of the Commission of Assembly, called the attention of their people to the revivals in Ire- land, and the effect these ought to have upon this country, urging their congregations to redoubled diligence in prayer for the outpouring of the Holy Ghost. —Glasgow Mornittg Journal.

Edinburgh has been the scene of a series of arrests for arrears of annuity tax. The clergy of the established church sent the sheriff's officer to seize three persons. Two went to gaol rather than pay the tax. The third, a Mr. Hunter, said he would offer no resistance, but would not willingly move a step. He was Seized by the head and feet, carried out of his shop, and flung into a cab. Here he lay on his back, his feet projecting into the street. The sheriff's men vainly endeavoured to raise him, and they placed handcuffs at least on one wrist of the unresisting man. They pulled at his arms, lugged at his head, doubled up his legs, but in vain. A mob having collected, on hearing the cause of the arrest, they fell upon the officers, one of whom drew a knife in defence. At length the officers sheered off, and Mr. Hunter reentered his shop, the handcuffs hanging from one wrist. The mob pursued the constables until they ran. Two ministers of the established church were present during this extraordinary scene.

In November' 1857, a shoemaker of Glasgow lost his son, and all the means taken to find him failed. At the end of August the shoemaker was waiting in the Police Court to answer a trifling charge of assault. A woman was placed in the dock. She had with her a boy, her son, she said. This boy she had compelled to steal clothes from a bleaching green. The shoe- maker declared that the boy was his son, and said that if examined it would be found he had the mark of a burn under his arm. The mark was found, and the child confronted with his mother, remembered, and neighbours identified him. The woman was convicted of stealing, and we suppose the child was restored to his parents.

Very serious riots have occurred at Wick. The coast fishermen and the Highlanders are inflamed against each other, and they fight out their quar- rel with knives and other deadly weapons. Several persons have been greatly injured. On Saturday the soldiers and sailors in the port were brought into the town to quell the fray.