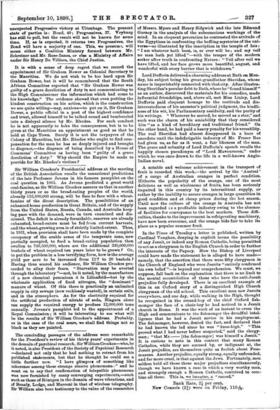 Page 3, 10 September 1898 — Sir William Crookes's Presidential address at the meeting of the
Close

Sir William Crookes's Presidential address at the meeting of the

British Association recalls the sensational predictions of the late Professor Jevons in his famous pamphlet on the coal question in 1865. As Jevons predicted a great world coal-famine, so Sir William Crookes assures us that in another thirty years or so the bread-eating peoples of the world, already 516,500,000 strong, will be face to face with a wheat. famine of the direst description. The possibilities of an enhanced home production in Great Britain, and of the supply from the United States, Russia, Canada, and Australia keep- ing pace with the demand, were in turn examined and dis- missed. The deficit is already formidable, reserves are already exhausted, bread-eaters must be fed from current harvests, and the wheat-growing area is of strictly limited extent. Thus, in 1931, when provision shall have been made by the complete occupancy of the arable areas of the temperate zone, now partially occupied, to feed a bread-eating population then swollen to 746,500,000, where are the additional 330,000,000 bushels of wheat required ten years later to be grown ? Or, to put the problem in a leas terrifying form, how is the average yield per acre to be increased from 121 to 20 bushels ? Having thus scared his audience, Sir William Crookes pro- ceeded to allay their fears. "Starvation may be averted through the laboratory "—not, be it noted, by the manufacture of a new chemical pemmican a /a Lilienfeld—but by the wholesale application of fixed nitrogen, the "dominant" manure of wheat. Of this there is practically an unlimited supply in city sewage (now recklessly wasted), in certain soils, and in the atmosphere. As for the electricity required for the artificial production of nitrate of soda, Niagara alone can supply the required energy to produce 12,000,000 tons annually. Jevons's pamphlet led to the appointment of a Royal Commission ; it will be interesting to see what will be the results of Sir William Crookes's address. Probably, as in the case of the coal scare, we shall find things not so black as they are painted.