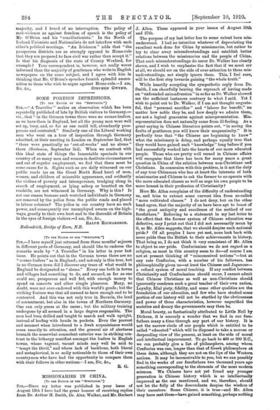 [To THE EDITOR OP THE "SPECTATOR."] SIR,—" A Traveller" makes an observation which has been repeatedly published of late by British visitors to Germany,— viz., that " in the German towns there were no corner-loafers, as we have them in England, but all the young men were well set up, busy, and, so far as one could tell, abundantly pros- perous and contented." Similarly one of the Liberal working men who went on a tour of inspection through Germany admitted, at their meeting in London on September 2nd, that " there were practically no g out-of-works' and no slums " there (Scotsman, September 3rd). When we contrast with this ideal state of things the lamentable spectacle in our country of so many men and women in destitute circumstances and out of regular employment, we feel that there must be some cause for it. Sights such as are daily witnessed on our public roads (as on the Great North Road here) of men, women, and children of miserable appearance, and evidently the victims of poverty and intemperance, trudging along in search of employment, or lying asleep or besotted on the roadside, are not witnessed in Germany. Why is this ? Is not one reason because such wretched individuals in Germany are removed by the police from the public roads and placed in labour colonies ? The police in our country have no such power, and consequently our unemployed swarm on the high- ways, greatly to their own hurt and to the discredit of Britain in the eyes of foreign visitors.—I am, Sir, &c.,