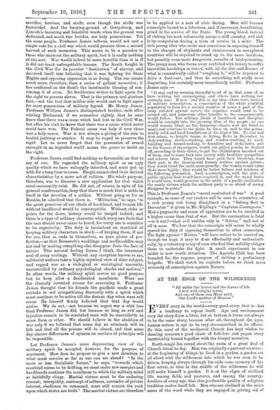 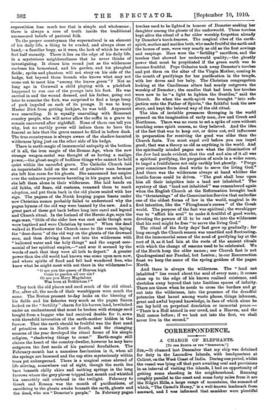 AT THE EDGE OF THE WILDERNESS.

"All under the leaves and the leaves of life I met with virgins seven, And one of them was Mary mild,

Our Lord's mother of Heaven."

EVERY story in the world—every good story, that is—has

a tendency to repeat itself. Age and environment vary the story-form a little, but at bottom it turns out always to be the same story, because after all, throughout the ages, human nature is apt to be very circumscribed in its affairs. So this carol of the mediaeval Church has kept within its dancing measure a good share of folk-lore and pagan story inextricably bound together with the Gospel narrative.

Earth-magic lies round about the roots of a great deal of Church ritual to-day. Man was originally a pastoral creature : at the beginning of things he lived in a garden, a garden set all about with the wilderness into which he was soon to be driven, keeping always through his exile some memory of his first estate, so that in the middle of the wilderness he will still make himself a garden. It is on the edges of civilised life, among fields and pastures, and among the country- dwellers of every age, that this perdurable quality of religious tradition makes itself felt. Men who are civilised in the strict sense of the word while they are engaged in getting rid of

superstition lose much too that is simple and wholesome there is always a core of truth inside the traditional unreasoned beliefs of pastoral folk.

To the proper countryman the supernatural is an element of his daily life, a thing to be evaded, and always close at hand,—a familiar bogy, as it were, the lack of which he would feel half uneasily. There it lies on the edge of his daily life,

in a mysterious neighbourliness that he never thinks of investigating. It closes him round just as the wilderness encloses his homestead, and his garden, and his ploughed fields ; sprite and phantom will not stray on his side of the hedge, but beyond those bounds who knows what may not come out to meet him " among the leaves green " P Not so long ago in Cornwall a child playing with a pitchfork happened to run one of the prongs into his foot. He was carried in and the wound dressed, and his father, going out later to examine the fork, was surprised to find a large lump of pork impaled on each of its prongs. It was to keep Master Dick from getting lockjaw, he was told. Argument

was unavailing. It is equally unavailing with Somerset country people, who will never allow the coffin in a grave to

remain uncovered after nightfall. None of them can tell you why, but no earthly power will induce them to have the

funeral so late that the grave cannot be filled in before dusk. The true countryman is always aware of the shadow-haunted wilderness lying just on the other side of his hedge.

There is earth-magic of immemorial antiquity at the bottom of it all, the iron magic of the Bronze Age, when the new strange weapon-metal was thought of as having a malign power,—the ghost-magic of bodiless things who cannot be held quiet within the unroofed grave. The Catholic Church laid an imperishable hold on the soul of primitive man because she left him room for his ghosts. She announced her empire over the unknown presences haunting in his pagan mind, but she left them alone in their wilderness. She laid hands on old faiths, old fears, old customs, renamed them to mark adoption, and put them back in the old places sealed with her sign. The pagans of the North keeping pagan feasts under new Christian names probably failed to understand why the pagan hymns of the old way were banned by the new. And a great part of these got back before long into carol and legend and Church ritual. In the Iceland of the Heroic Age, says the saga-man, "little of the older lore was cast aside though men were baptised and were Christian by name." When the dead walked at Frodiswater the Church came to the rescue, laying the "door-doom" of the old way on the ghosts of the drowned men, and then driving them out into the wilderness with " hallowed water and the holy things " and the august cere- monial of her spiritual empire,—" and ever it seemed by the words of each that they were all loth to depart." A greater power than the old world had known was come upon men now, and where spirits of flood and fell had wandered free, who knew what he might meet with out there in the wilderness ?—

" 0 are you the queen of Heaven high Come to pardon all our sin? Or are you Mary Magdalene Was born at Bethlehem?'

They took the old places and used much of the old ritual. For, after all, the needs of their worshippers were much the same. The Breton peasant to-day looks on the blessing of his fields and his fisheries very much as the pagan Saxon looked on the " fertility " charm for his barren land, bewitched under an enchantment that must be broken with strange seed bought from a beggar who had received double for it, sown with threefold invocation of the earth-mother hidden in the furrow. That the earth should be fruitful was the first need of primitive man in North or South, and the changing seasons of the year developed the ritual forms of his simple religion, "shadowing things to come." Earth-magic still claims the heart of the country-dweller, however he may have outgrown the first needs of his pastoral forefathers. The February-month has a nameless fascination in it, when all the springs are loosened and the sap stirs mysteriously within trees yet unburgeoned. There is a magical sense abroad of life stirring, somewhere out of sight, though the earth lies bare beneath chilly skies and nothing springs in the long furrows where the grey plover tripped last month and whistled his unearthly call overhead in the twilight. February to Greek and Roman was the month of purifications, of sacrificing to the ghosts awake beneath the earth, ghosts and the dead, who are " Demeter's people." In February pagan

torches used to be lighted in honour of Demeter seeking her daughter among the ghosts of the underworld. Those torches kept alive the ritual of a far older worship forgotten already by Demeter's torch-bearers. The magical rites of the earth- spirit, mother and maiden both, who made fruitful the earth and the homes of men, were very nearly as old as the first sowings and reapings. Hers were the "fertility" sacrifices, and the torches that showed her underworld quality,—the ghostly power that must be propitiated if the green earth was to become fruitful. Pope Gelasius took away Demeter's torches and put them on the altar of the Virgin Mother, coming in the month of purifyings for her purification in the temple, with her doves and her baby. The Christian congregation looking at the Candlemas altars had nearly outgrown the worship of Demeter ; the candles that had been her torches were now to be " a light to lighten the Gentiles," said the Church. So when the earth-spirit was brought " into sub- jection unto the Father of Spirits," the faithful took the new story, and kept the beloved way of the old ritual.

The idea of invisible presences thronging in the world pressed on the imagination of early man, Jew and Greek and Northman. There was no room to set a spike of corn without touching some spirit unseen, so they believed. And the idea. of the fast that was to keep out, or drive out, evil influences in preparation for receiving the good was older than the Church fasts. You must expel evil before you can impel good; that was a theory as old as anything in the world. And the spiritually minded pagan saw what the illumination of the Jew had made evident, that the end and aim of it all was a spiritual purifying, the purgation of souls in a wider sense, to impel a fruitfulness not only earthly but ghostly. "Purge your conscience from dead works to serve the living God." And there was the wilderness always at band whither the hostile forces could be driven. " The goat shall bear upon him all their iniquities into a land not inhabited." The mystery of that "land not inhabited" was remembered again when the English Church at the Reformation brought back the "threatenings" of the Commination Service that embodies one of the oldest forms of law in the world, magical in its first intention, like the "Ploughman's curses " of the Greek world. The purpose of the fast was spiritual ; the worshipper was to "afflict his soul" to make it fruitful of good works, devoting the powers of ill to be cast out into the wilderness that his soul might be free " to serve the living God."

The ritual of the forty days' fast grew up gradually ; for long enough the Church season was unsettled and fluctuating. But the immemorial sense of the need of purifying lay at the root of it, as it had lain at the roots of the ancient rituals with which the change of seasons used to be celebrated. We of the North keep the older names ; our Church fast is not Quadragesimal nor Paschal, but Lenten ; in our Resurrection feast we keep the name of the spring goddess of the pagan North.

And there is always the wilderness. The " land not inhabited" lies round about the soul of every man; it comes close up to the edge of his known realised existence, and stretches away beyond that into limitless spaces of infinity, There are times when he needs to cross the borders and gc out into the wilderness, into the presence of the dreadful potencies that haunt among waste places, things inhuman, great and awful beyond knowledge, in face of which alone he can lay hold on perpetual desolation or immortal peace :— " There is a Hell named in our creed, and a Heaven, and the Hell comes before; if we look not into the first, we shall never live in the second."