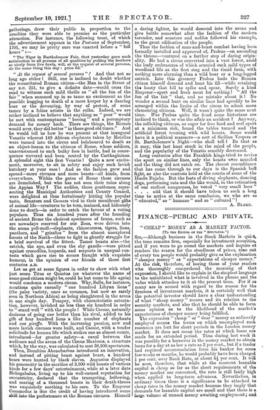 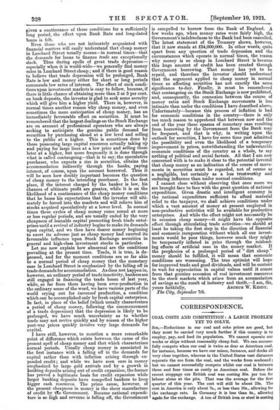 " CHEAP " MONEY AS A MARKET FACTOR.

[To THE EDITOR. or THE " SPECTATOIZ."] Sul,—Although business in the Stock Markets is quiet, the tone remains firm, especially for investment securities, and if you were to go round the markets and inquire at random the reason for the steadiness of prices, rune out of every ten people would probably give as the explanation " cheaper money " or " expectations of cheaper money." At the risk, therefore, of boring those of your readers who thoroughly comprehend the meaning of that expression, I should like to explain in the simplest language to the uninitiated what is involved in the phrase and the value which attaches to it at the present time. For if so many are in accord with regard to the reason for the firmness of investment markets, it is certainly well that the potential investor should have a clear understanding of what " cheap money " means and its relation to the security markets, and also that he should be able to form some opinion as to the likelihood of the market's expectations of cheaper money being fulfilled. The expression " cheap " or dear " money as ordinarily employed means the terms on which unemployed cash resources are lent for short periods in the London money market. It does not mean the rates at which loans are made for an extended period. Thus during last week it was possible for a borrower in the money market to obtain loans for a day at as low a rate as 2 per cent., but if a trader had required accommodation from his banker for some few•weeks or months, he would probably have been charged 1 per cent. over Bank Rate, or about 6i per cent. It will be seen, therefore, that while at the moment loanable capital is cheap so far as the short requirements of the money market are concerned, the rate is still fairly high when applied to long-term advances. Nevertheless, in ordinary times there is a significance to be attached to cheap rates in the money market because they imply that demands for loanable capital are small and that there is a large volume of unused money awaiting employment; and given a continuance of those conditions for a sufficiently long period, the effect upon Bank Rate and long-dated loans is felt.

Even those who are not intimately acquainted with financial matters will easily understand that cheap money in Lombard Street usually means—in normal times—that the demands for loans to finance trade are exceptionally slack. Thus during spells of great trade depression— especially when it is world-wide—we generally find money rates in Lombard Street cheap ; and if there is good reason to believe that trade depression will be prolonged, Bank Rate is low and money either for short or long periods commands low rates of interest. The effect of such condi- tions upon investment markets is easy to follow, because, if there is little chance of obtaining more than 2 or 3 per cent. on bank deposits, the investor is glad to seek some security which will give him a higher yield. There is, however, in normal times another reason why cheap money, and even sometimes the mere anticipation of cheap money, has an immediately favourable effect on securities. It must be remembered that the largest dealings on the Stock Exchange are on account of professional operators who are always seeking to anticipate the genuine public demand for securities by purchasing ahead at a low level and selling to the public at a higher. This is sometimes done by those possessing large capital resources actually taking up and paying for large lines at a low price and selling them later at a higher, but more frequently it is done through what is called contangoing—that is to say, the speculative purchaser, who expects a rise in securities, obtains the accommodation indirectly through the banks, paying interest, of course, upon the amount borrowed. Thus it will be seen how doubly important becomes the question of cheap money to the intending purchaser. In the first place, if the interest charged by the banker is low, his chances of ultimate profit are greater, while it is on the likelihood of a continuance of the cheap money conditions that he bases his expectations that the investor will ulti- mately be forced into the markets and will relieve him of stocks acquired speculatively at a lower level. In normal times these cycles of cheap money come round at more or less regular periods, and are usually ended by the very cheapness of loanable capital promoting fresh trade enter- prises until a revival of industry begins to make its demands upon capital, and we then have dearer money beginning to exert its adverse just as cheap money had exerted its favourable influence upon Stock Exchange securities in general and high-class investment stocks in particular. Let me now explain how abnormal are the conditions prevailing at the present time. Trade, it is true, is de- pressed, and for the moment conditions are so far akin to a normal period of cheap money that the monetary ease in Lombard Street is emphasized by the falling off in trade demands for accommodation. As does not happen in, however, an ordinary period of trade inactivity, bankers are still engaged in financing the trade boom of last year, while, so far from there having been over-production in the ordinary sense of the word, we have various parts of the world crying out for increased production, a condition which can be accomplished only by fresh capital enterprises.

In fact, in place of the belief (which usually characterizes a period of cheap money, following the commencement of a trade depression) that the depression is likely to be prolonged, we have much uncertainty as to whether trade may not revive quickly and by reason of the higher post-war prices quickly involve very large demands for capital.

I have still, however, to mention a more remarkable point of difference which exists between the cause of the present spell of cheap money and that which characterizes normal periods. Usually cheap money is associated in the first instance with a falling off in the demands for capital rather than with inflation arising through ex- panded credit ; and while we have seen ease in money emphasized by large gold arrivals and by a growth in banking deposits arising out of credit expansion, the former has proved a legitimate basis for credit expansion while larger banking deposits have compelled bankers to keep bigger cash resources. The prime cause, however, of the present cheapness in money is the sheer manufacture of credit by the Government. Because national expendi- ture is so high and revenue is falling off, the Government is compelled to borrow from the Bank of England. A few weeks ago, when money rates were fairly high, the Government's indebtedness to the Bank had been cancelled. The latest statement of the Treasury shows, however, that it now stands at £54,000,000. In other words, quite apart from any question of trade depression and the circumstances which operate in normal times, the reason why money is so cheap in Lombard Street is because this huge amount of credit has been created through Government borrowing. That money has yet to be repaid, and therefore the investor should understand that the argument applied to cheap money in normal times as affecting securities has not exactly the same significance to-day. Finally, it must be remembered that contangoing on the Stock Exchange is now prohibited, and, consequently, the connexion between the course of money rates and Stock Exchange movements is less intimate than under the conditions I have described above. Unfortunately—because this process of inflation is bad for economic conditions in the country—there is only too much reason to apprehend that between now and the end of the year these spasms of monetary ease resulting from borrowing by the Government from the Bank may be frequent, and that is why, in writing upon the outlook for securities, I have for some time past admitted the possibility and even the likelihood of a temporary improvement in prices, notwithstanding the unfavourable economic conditions of the country as a whole, to say nothing of political and social factors. All that I am now concerned with is to make it clear to the potential investor that cheap money as an indication of the course of move- ments in securities must be regarded, not of course as a negligible, but certainly as a less trustworthy and enduring influence than under normal conditions.

I cannot close without observing that once more we are brought face to face with the great question of national expenditure. Given drastic and intelligent economy in the national expenditure sufficient to afford material relief to the taxpayer, we shall achieve conditions under which a vast amount of money at present employed in non-productive activities will be available for productive enterprises. And while the effect might not necessarily be to occasion cheap money—it might have the opposite effect through stimulating trade activities—we should at least be taking the first step in the direction of financial and economic recuperation without which all our invest- ments would be poor things, however much they might be temporarily inflated in price through the mislead- ing effects of artificial ease in the money market. If the prophecies of a prolonged period of " dirt cheap " money should be fulfilled, it will mean that economic conditions are worsening. The true optimist will hope for improved trade and good dividends, and will be content to wait for appreciation in capital values until it comes from that genuine accession of real investment resources to the stock markets which arises from an accumulation of savings as the result of industry and thrift.—I am, Sir,