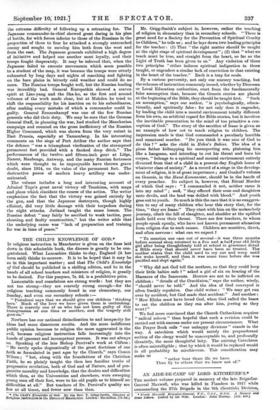 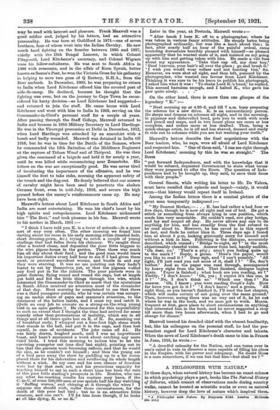 AN AIDE-DE-CAMP OF LORD KITCHENER'S.* Tun modest volume prepared in

memory of the late Brigadier. General Maxwell, who was killed in Flanders in 1917 while commanding the 27th Brigade in the 9th (Scottish) Division, • Frank Maxwell, Brigadier-General, V.C., C.S.I., 1).5.0. A Memoir and Soot Idlers. Edited by his Wife. London : John Murray. [12.s. net.] mitt' be read with interest and pleasure. Frank Maxwell was a good soldier and, judged by his letters, had an attractive personality. He was born at Guildford in 1871—one of seven brothers, four of whom went into the Indian Cavalry. He saw much hard fighting on the frontier between 1895 and 1897, chiefly with the 18th Bengal Lancers, in which Colonel Fitzgerald, Lord Kitchener's secretary, and Colonel Wigram were his fellow-subalterns. He was sent to South Africa in 1900 with remounts, and in the affair of Kern Spruit, better known as Sauna's Post, he won the Victoria Cross for his gallantry in helping to save two guns of Q Battery, R.H.A., from the Boer ambush. In December, 1900, he was preparing to return to India when Lord Kitchener offered him the coveted post of aide-de-camp. He declined, because he thought that the fighting was over, but on the journey to Cape Town he recon- sidered his hasty decision—as Lord Kitchener had suggested— and returned to join the staff. He came home with Lord Kitchener and went with him to India in. 1902, serving on the Commander-in-Chief's personal staff for a couple of years. After passing through the Staff College, Maxwell returned to India and became in 1910 Military Secretary to Lord Hardinge. He was in the Viceregal procession at Delhi in December, 1912, when Lord Hardinge was attacked by an anarchist with a bomb and badly wounded. Maxwell was detained in India till 1916, but ho was in time for the Battle of the Somme, where he commanded the 12th Battalion of the Middlesex- Regiment at the capture of Troves Wood and of ThiepvaL He was then given the command of a brigade and held it for nearly a year, until he was killed while reconnoitring near Zonnebeke. His letters on the war are exceptionally good. He was never tired of inculcating the importance of the offensive, and he was himself the first to take risks, scorning the apparent safety of the trench and the dug-out. He firmly believed that our masses of cavalry might have been used to penetrate the shaken German front, even in mid-July, 1916, and secure the high ground before the enemy's reinforcements came up. He may have been right.

Maxwell's letters about Lord Kitchener in South Africa and India are most entertaining. He won his chiefs heart by his high spirits and outspokenness. Lord Kitchener nicknamed him " The Brat," and took pleasure in his fun. Maxwell wrote to his mother in March, 1901 :— "I think I have told you K. is a lover of animals—in a queer sort of way very often. The other morning we found him darting about his room in his early morning attire.(tousled hair, short dressing-gown, &c.) trying to catch a couple of young starlings that had fallen down his chimney. We caught them after a heated chase, and deposited the poor little beggars in, the wire pigeon-house in the garden. Then there was much fuss all day about their food ; and the good man would leave his important duties every half hour to see. if I had given them

meat, or procured succulent worms, and i

bustle in and say they were starving. It was no use pointing out they hadn't learnt to, eat by themselves yet, or that the pigeons wolfed any food put in for the infants. The poor parents were in great distress, flying round and round the cage, but at length got bold and fed the little things through the wire, which interested the-Commander-in-Chief so much that the operations in South Africa received no attention most of the remainder of that day. Next morning he complained• to me that there was a third youngster outside, who he •was certain was occupy- ing an undue share of papa and mamma's attention, to the i detriment of the babies inside, and I must try and catch it.

(Quite an easy job to execute on a strong-on-the-wing young bird in an open garden !) He clamoured for this impossibility to such an extent that I thought the time had arrived for some remedy other than protestations of inability, which are in all things and at all times quite lost on K. of K. So, sneaking out of breakfast early, I whipped out a four-foot high sham stork that stands in the hall, and put it in the cage, and then lost myself, in case of accidents. The joke came off Al. He was fairly drawn, laughed much, said I was an impertinent beast, and hasn't murmured a word about catching any more third birds. I tried this morning to induce him to let the surviving youngster out (one died last night), pointing out to him that the parents were becoming callous, and that he would die also, as he couldn't eat himself ; and then the young ass of a bird gave away the show by paddling up to a fat worm placed there for his delectation and swallowing its whole length without a wink. So my case and his own chance of freedom were lost by that rash act, and his precocious capacity for teaching himself to eat in such a short time has been the ruin of this poor little starling's prospects in life. Besides, who can say. what far-reaching results his capture may have, if the C.,an,C. of some 200,000 men at war spends half his day watching it fluffing worms,' and chirping at it through the wires ? I suppose one should wish, under these circumstances, for the death of this poor bad bird ; but he is an attractive little creature, and one can't. I'll let him loose though, if he looks at all like dying, K. or no K." Later in the year, at Pretoria, Maxwell wrote After lunch I bore K. off to a photographer, where he was taken in various fanoy attitudes. He simply hates being photographed ordinarily, but was like a lamb about this ; in fact, after nearly half an hour of the painful ordeal, came bounding downstairs horribly pleased with himself—so pleased apparently that he wanted more of it, and insisted on my going up with him and getting taken with him. He made a vile fuss

about my appearance. Take that cap off, my dear boy.'

' Good heavens, your hair's all over the place ; go and brush it.' ' I wish you would wear collars and not hunting ties,' &c. However, we were shot all right, and then left, pursued by the hp who wanted one favour from Lord Kitchener. Thmkmgg it was sure to be his leave to publish his photograph, I asked him what it was ` To shake Lord K.'s hand,' he replied. This seemed harmless enough, and I halted K., who gave his paw quite nicely. . .

On the other hand, there is more than one glimpse of the

" Next morning up at 4.30-5, and till 7 a.m. busy preparing the scheme for a new drive. K. is an extraordinary person. He sleeps and dreams on schemes all night, and in the morning, in pyjamas and dishevelled head, gets you to work with scale and pencil and maps, and in two hours plans are more or less complete, and orders more or less drafted. Then, being a quick-change artist, he is off and has shaved, dressed and ready to ride out to columns while you are but washing your teeth."

Maxwell's letters describe the final negotiations with the Boer leaders, who, he says, were all afraid of Lord Kitchener and respected him. " One of them said, ` I can see right through Lord Kitchener,' meaning by this he was so straight." The Boers " put forward Independence, and with the knowledge that it would be refused, requested Government to state what terms they were prepared to offer the Boers. The question of Inde- pendence had to be brought up, they said, to save their faces with their people."

General Smuts, while writing his letter to Mr. De Valera, must have recalled that episode and hoped—vainly, it would seem—that history would repeat itself in Ireland.

Among the Indian letters there is a comical picture of the great man temporarily indisposed :- " My Dearest Mother,— . . . K. has had rather a bad four or five days, though he is now all right and out of bed. He got a stitch or something, from always lying in one position, which made him very unsociable. He couldn't read, nor play bridge, and lay and moped all day. He never allows any one to do anything for him, and has steadily from the first refused to be read aloud to. However, he has caved in in this regard at last, and finds he rather likes it. Three days ago I found him at about 5 p.m. looking grievously sorry for himself and without a kick in him. Following is the dialogue, accurately described, which ensued ' Bridge to-night, sir ? in the most objectionably. cheerful voice. Answer from bed, hardly audible, Oh dear, no.' That's a pity ; aren't you feeling quite up to the mark ? ' Reply, a groan. Here's the paper, would you like to read it ? ' Deep sigh, and I can't possibly.' All right, I'll just read you out some of it, shall I ? " No, don't bother.' And so the paper was read through, accompanied by heavy sighs from the bed. That finished, dialogue begins again. Paper is finished ; what book are you reading, sir ? ' Feebly, I don't know.' Oh, yes ; I expect it's this one, is it " No, I don't think so.' Which one then ? ' No answer. ` Oh, I know; you were reading Gough's Life. How far have you got in it ? " I don't know,' and a groan. AU 'rnigght then, as you haven't finished it, I'll read the last chapter, which will make certain of not going over the same ground.' Then, however, seeing there was no way out of it, he let out where he was in the book, and we soon got to work. Moans, frequent at first, gave place to short exclamations on anything that interested him in the book, and he never suggested a stop till more than two hours afterwards, when I had to go and change for dinner."

Maxwell treated his dreaded chief with the utmost familiarity, but, like his colleagues on the personal staff, ho had the pro- foundest regard for Lord Kitchener's character and talents. When the news of Lord Kitohener's death came to him in France in June, 1916, he wrote :— "A dreadful calamity for the Nation, and one turns over in one's mind in vain to discover a man capable of filling his place in the Empire, with his power and adequacy. No doubt there is a man somewhere, if we can but find him—but shall we ? "