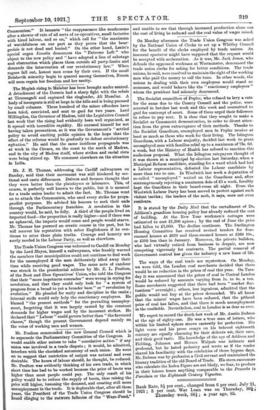 Page 3, 10 September 1921 — The Socialist councillors of Poplar, who refused to levy a
Close

The Socialist councillors of Poplar, who refused to levy a

rate for the sums due to the County Council and the police, were arrested in batches last week and this week and committed to gaol for contempt of court. Some of them urged their followers to refuse to pay rent. It is clear that they sought to make a Socialist or Communist demonstration, in order to divert atten- tion from the gross extravagance of their methods. Thanks to the Socialist Guardians, unemployed.men in Poplar receive at least as much as those who work for their living. The Islington Guardians, with a Labour majority, decided last week to grant unemployed men with families relief up to a maximum of 73s. lid. a week, but the Ministry of Health has refused to sanction this audacious proposal. What the Islington ratepayers thought of it was shown at a municipal by-election last Saturday, when a Municipal Reform candidate, standing for a ward which had had a Labour representative, defeated the Labour candidate by more than two to one. In Woolwich last week a deputation of so-called " unemployed " waited on the Guardians and, after contemptuously rejecting a maximum dole of £3 a week, forcibly kept the Guardians in their board-room all night. Even the Woolwich Labour Party has been moved to protest against such violent tactics ; the leaders of the mob, it says, were not even residents.