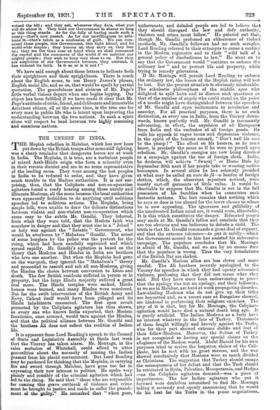 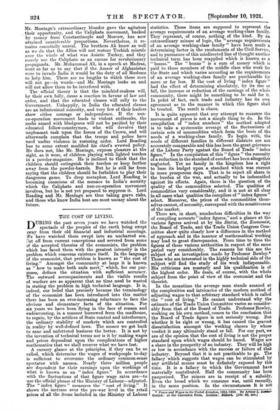 THE Moplah rebellion in Malabar, which has now been put down by the British troops after some stiff fighting, was a sharp reminder that dangerous forces are at work in India. The Moplahs, it is true, are a turbulent people of mixed Arab-Hindu origin who form a minority even in their remote district and are in no sense representative of the leading races. They were among the last peoples in India to be reduced to other, and they have given much trouble to the Madras authorities. It is not sur- prising, then, that the Caliphate and non-co-operation agitators found a ready hearing among these unruly and illiterate Moslems, all the more because the local authorities were apparently forbidden to do anything until seditious speeches led to seditious actions. The Moplahs, being simple folk, were unable to draw the delicate distinctions between violent and non-violent non-co-operation which come easy to the subtle Mr. Gandhi. They inferred, from what they were told, that the Moslem faith was somehow in danger and that they must rise in a " Jehad " or holy war against the " Satanic " Government, who would be overborne by " Mahatma " Gandhi. The arrest of some burglars by the police was the pretext for the rising, which had been carefully organized and which spread rapidly. Mr. Gandhi's agitation is based on the theory that Moslems and Hindus in India are brothers who love one another. But when the Moplahs had gone on the war-path, they ignored the "Mahatma's " theory and proceeded to assault and rob all non-Moslems, giving the Hindus the choice between conversion to Islam and death. The few British residents suffered in person or in property, but the large Hindu majority suffered a great deal more. The Hindu temples were sacked, Hindu houses were burned, and many Hindus were murdered. But for the swift intervention of the British Army and Navy, Calicut itself would have been pillaged and its Hindu inhabitants massacred. The first open revolt promoted by the Caliphate agitators has thus shown, as every one who knows India expected, that Moslem fanaticism, once aroused, would turn against the Hindus, and that the political alliance between Mr. Gandhi and the brothers All does .not reflect the realities of Indian life.

The official theory is that the mischief-makers will, by their own folly, cause a reaction in favour of law and order, and that the educated classes will rally to the Government. Unhappily, in India the educated classes are an infinitesimal minority, and very few of their leaders show either courage or independence. If the non- co-operation movement leads to violent outbreaks, the mobs armed with bludgeons will not be pacified by their educated fellow-countrymen, who will devolve that unpleasant task upon the forces of the Crown, and will afterwards complain that the troops and police have used undue violence in restoring order. Lord Reading has to some extent modified his chief's avowed policy. He does not, like Mr. Montagu, express pleasure at the sight, as it were, of children playing with lighted torches in a powder-magazine. He is inclined to think that the children should extinguish their torches or keep farther away from the powder-barrels. But he is still far from saying that the children should be forbidden to play their dangerous game. To drop metaphor, Lord Reading is becoming conscious of the menace to India's security which the Caliphate and non-co-operation movement involves, but he is not yet prepared to suppress it. Lord Reading and Mr. Montagu are thus taking grave risks, and those who know India best are most uneasy about the future.