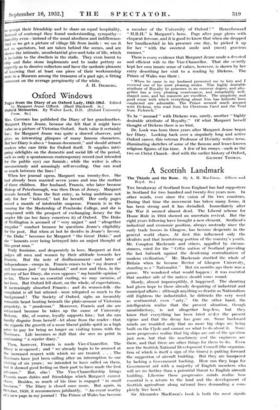 MRS. GIFFORD has published the Diary of her grandmother, Margaret Dyne Jenne, because she felt that it might have value as a picture of Victorian Oxford. Such value it certainly has ; for Margaret Jenne was quite a shrewd observer, and gives us interesting glimpses of many famous characters. But her Diary is also a "human document," and 'should attract readers who care little for Oxford itself. It supplies intri- guing sidelights on the d-omestic and social life of the period, such as only a spontaneous contemporary record (not intended for the public eye) can furnish ; while the writer is often unconsciously and amusingly self-revealing. One can read so much between the lines !

When her journal opens, Margaret was twenty-five. She had already been married seven years and was the mother of three children. Her husband, Francis, who later became Bishop of Peterborough, was then Dean of Jersey. Margaret reveals herself, from the first entry, as being ambitious not only for her "beloved," but for herself. Her early pages record a month of intolerable suspense. Francis is in the running for the Mastership of Pembroke College, and she is enraptured with the prospect of exchanging Jersey for the ampler life (as her fancy conceives it) of Oxford. The Duke of Wellington is accused of "very unjust" and altogether irregular" conduct because he questions Jeune's eligibility for the post. But when at last he decides in Jeune's favour, the Duke" becomes for Margaret "the Great Duke," and she laments ever being betrayed into an unjust thought of this great man."

Truly feminine, and desperately in love, Margaret at first judges all men and women by their attitude towards her Francis. But the note of disillusionment—and later of independence—creeps in. Francis ceases to be "my dearest" and becomes just "my husband," and now and then, in the privacy of her Diary, she even opposes "my humble opinion" to his. There was no essential cooling, we may surmise, of her love. But Oxford fell short, on the whole, of expectations. It increasingly absorbed Francis ; and its women-folk—the complaint is all but uttered—were relegated so much to the background ! The Society of Oxford, sighs an incurably romantic heart beating beneath the plate-armour of Victorian Propriety, is "ponderous." Moreover, Francis and she are ostracized because he takes up the cause of University Reform. She, of course, loyally supports him ; but she can hardly disguise from herself—let alone from the reader—that she regards the growth of a more liberal public spirit as a high Price to pay for being no longer on visiting terms with the Norrisses. Life becomes so dull that she sees no point in continuing "a regular diary."

Then, however, Franejs is made Vice-Chancellor. The Diary is re-opened ; and "we already begin to be amused at the increased respect with which we are treated. . . . The Xorrisses have just been calling after an interruption to our visiting of six years ; we intended to have called on them, but it showed good feeling on their part to have made the first advance." But, alas ! The Vice-Chancellorship brings Francis more duties and friendships which Margaret cannot shore. Besides, so much of his time is engaged " in small business." The Diary is closed once more. But again, in October, 1859, it recommences jubilantly. "An event worthy of a new page in my journal ! The Prince of Wales has become

a member of the University of Oxford ! " Henceforward is Margaret's hero. Page after page glows with eloquent fervour, and it is good to know that when she dropped her handkerchief in his presence one day, he picked it up for her with the sweetest smile and (most) gracious manner."

There is every evidence that Margaret Jeune made a devoted and efficient wife to the Vice-Chancellor. That she secretly kept her own innate sense of values, however, is shown by her entry describing her visit to a reading by Dickens. The Prince of Wales was there :

"- When he came in my husband presented me to him and f received one of his most pleasing smiles. This highly desirable attribute of Royalty he possesses in an eminent degree, and alto- gether has a very pleasing countenance, and remarkably well- shaped nose, and his manners are excellent. The simplicity and good sense with which everything about him has hitherto been conducted are admirable. The Prince seemed much amused with Dickens, who read from his Christmas Carol and the Trial from Pickwick."

To be " amused " with Dickens was, surely, another "highly desirable attribute of •Royalty." Of what Margaret herself thought of Dickens there is no hint.

Dr. Lock was. born three years after Margaret Jeune began her Diary. Looking back over .a singularly long and 'active

Oxford career, this veteran Professor of Divinity writes terse, illuminating sketches of soine Of the famous and lesser-known religious figures of his. time. A few of his essays—such as the two on Christ Church—deal with the earlier history of Oxford, GII.BERT THOMAS.