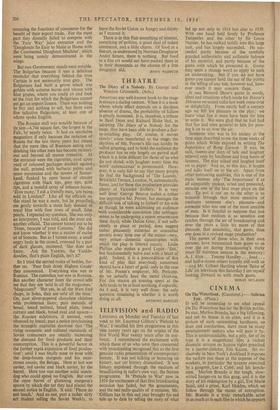 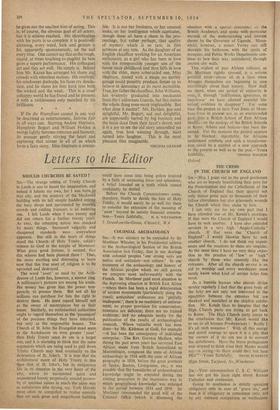 CINEMA On The Waterfront. (Gaumont.) Sabrina Fair. (Plaza.) IT will

be interesting to see what appeal On The Waterfront has for the British public. Its star, Marlon Brando, has a big following, and yet its theme is so alien, and it is a picture of such unremitting harshness, so drab and comfortless, there must be many entertainment seekers who will pass it by. This is understandable, but a pity, for of its type it is a magnificent film, a violent dramatic sermon on human rights preached by a master-director, Elia Kazan. Set ex- clusively in New York's dockland it exposes the rackets run there at the expense of the workers, in particular the tyranny exercised by a gangster, Lee J. Cobb, and his hench- men. Marlon Brando is the tough, slow- witted hanger-on to this gang, and it is the story of his redemption by a girl, Eve Marie Saint, and a priest, Karl Malden, which we follow through the mazes of corruption. Mr. Brando is a truly remarkable actor in as much as in each film in which he appears

he gives not the smallest hint of acting. This is, of course, the obvious goal of all actors, but it is seldom reached. His identification with his parts is so complete it is positively alarming, every word, look and gesture is hit, apparently spontaneously, on the nail every time. One cannot say that as the rough, stupid, at times touching ex-pugilist he here gives a superb performance. His colleagues act and they act well. He simply is. Behind him Mr. Kazan has arranged his slums an crowds with relentless realism. His rooftops; his windswept dockside, his faces cry desola- tion, and he slams his fists hard into both the wicked and the weak. This is a cruel unhappy. world he has found and he presents it with a ruthlessness only matched by his brilliance.

If On the Waterfront cannot in any was, be described as entertainment, Sabrina Fair in all ways can. Starring Audrey Hepburn, Humphrey Bogart and William Holden it swings lightly between romance and humour, its passage gently stirring the heart and capturing that corner in all of us which loves a fairy story. Miss Hepburn is irresist-

ible. It is not her freshness, or her unusual. looks, or her intelligence which captivates, though these all have a share in the pro- ceedings, but rather perhaps, that quality of mystery which is so rare, in film actresses at any rate. As the daughter of an English chauffeur working for an American millionaire, as a girl who has been in love with the irresponsible younger son of the house since childhood and then falls in love with the elder, more sober-sided one, Miss Hepburn, dusted with a magic no earthly garage could possibly produce, forces us to believe in democracy at its most incredible. True, her father the chauffeur, John Williams, has evidently graduated into mechanics from the Coldstream Guards, but this makes the whole thing even more implausible. But what does it matter? Mr. Holden, gay and delightful, Mr. Bogart, sad and delightful, are supposedly barred by big business and the baize door from their heart's desire, and it is a joy to see the old story unravelled yet again, true love winning through, tears turned into laughter. This is the most pleasant film imaginable.