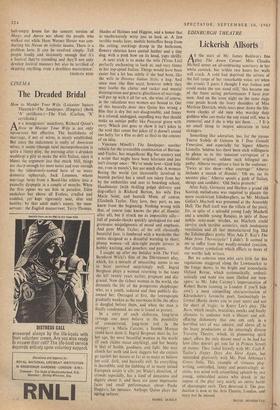 How to Murder Your Wife. (Leicester Square Theatre.)—The Sandpiper. (Empire.) (Both 'A' certificate.)—The Visit. (Carlton, 'X' certificate.) As a misogynists' manifesto, Richard Quine's 1-low to Murder Your Wife is not only uproarious but effective. The. hatefulness of marriage, if not of wives, is nicely established. But since the indictment is really of American wives, it seems (though total incomprehension is quite a funny ploy, the morning after a drunken wedding) a pity to make the wife Italian, since it blunts the argument just that much. Still, things are sharp enough for most tastes and sour enough for the ridiculously-named hero of so many domestic upheavals, Jack Lemmon, whom marriage turns from a Bond-like athlete into a paunchy dyspeptic in a couple of months. When the film opens we see him in paradise, Eden snakeless but above all Eyeless, cradled and coddled, yet kept rigorously neat, slim and healthy, by that adult male's nanny, the man- servant : the English manservant, Terry-Thomas.

Shades of Holmes and Higgins, and a house that is unobtrusively witty just to look at. A few terrible weeks later, mobile butterflies hang from the ceiling, stockings droop in the bathroom, flowery chintzes have ousted leather and a tiny dog, with a pink bow on its head, yaps shrilly.

A neat trick is to make the wife (Virna Lisi) perfectly enchanting to look at, and very funny in her top-speed Italian. Things would have been

easier but a lot less subtle if she had been, like the wife in Divorce Italian Style, a hag. And

since men (the film says), however mach they may loathe the clutter and racket and mental disintegration and general ghastliness of marriage, will put up with it all for sex, she wins, of course, in the ridiculous way women are bound to. Out of this basically ,dour idea Quine has wrung a film that is dry but not disagreeable, and funny

in a relaxed, undogged, unpuffing way that should make an outsize puffer like Pussycat green with

envy. Which just goes to show it isn't jokes in the void that count but jokes (if it doesn't sound too hefty for a film as deft as this) in the context of an idea.

Vincente Minelli's The Sandpiper, another vehicle for the irresistible combination of Burton-

and-Taylor, has magnificent Big Sur scenery and a script that might have been hilarious and just isn't (except once: 'We've made love—God help me, even in motels'), but not much else. A woman fleeing the world (yet incessantly involved in beatnik parties) has a small son taken from her by the authorities and sent to boarding school.

Headmaster (with thrilling pulpit delivery and dog-collar) is Richard Burton, his wife Eva Marie Saint, and beatnik Mum, of course, Elizabeth Taylor. They love, they part, as one knew from the beginning. Nothing wrong with

that, of course (one knows the plot of Hamlet, after all), but it struck me as impossibly silly— full of pseudo-shocks quickly apologised for and

grotesque misjudgments of mood and emphasis.

And poor Miss Taylor, of the still classically beautiful face, is lumbered with a wardrobe that seems designed as a dreadful warning to short; plump women—all skin-tight purple jerseys in bobbly knitting, and ponchos, and pants.

I caught up after my holiday with The Visit, Bernhard Wicki's film of the DUrrenmatt play,

which, for a miracle of miscasting, seems to me to have survived surprisingly well. Ingrid Bergman plays a woman returning to the town she left twenty years earlier, pregnant and dis- graced. Now the richest woman in the world, she demands the life of the prosperous shopkeeper who, as a youth, seduced and then publicly dis- owned her. Outraged at first, the townspeople gradually weaken as the enormous bribe she offers is dangled before them, and when the man is finally condemned, no one is found to protest.

In a story of such elaborate, long-term revenge one must believe in the possibility of concentrated, long-term evil in the avenger: a Maria Casares, a Jeanne Moreau could have done it. Ingrid Bergman must be, for her age, the most beautiful woman in the world (if such claims mean anything), and her beauty is that of health, goodness, and light. She may clench her teeth and look daggers but she cannot go against her nature so far as to make us believe her cold, dark, and basically evil. So everything is incredible, and the dubbing of so many mixed European actors is vile; yet Wicki's direction, of crowds especially, has a kind of denseness and dignity about it, and there are some impressive faces and small performances about—Paolo Stoppa's, for instance. Anthopy Quinn plays the ageing seducer.