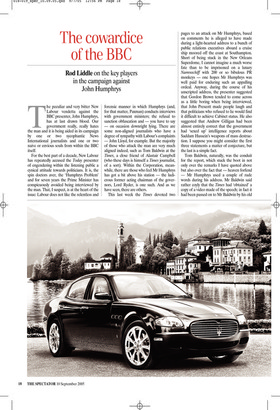 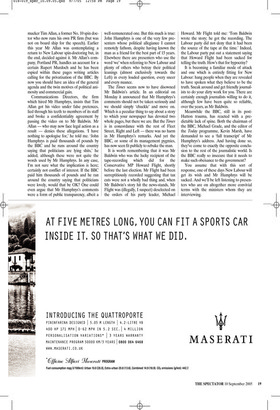 The cowardice of the BBC

Rod Liddle on the key players in the campaign against John Humphrys The peculiar and very bitter New Labour vendetta against the BBC presenter, John Humphrys, has at last drawn blood. Our government really, really hates the man and it is being aided in its campaign by one or two sycophantic News International journalists and one or two naive or envious souls from within the BBC itself.

For the best part of a decade, New Labour has repeatedly accused the Today presenter of engendering within the listening public a cynical attitude towards politicians. It is, the spin doctors aver, the ‘Humphrys Problem’ and for seven years the Prime Minister has conspicuously avoided being interviewed by the man. That, I suspect, is at the heart of the issue: Labour does not like the relentless and forensic manner in which Humphrys (and, for that matter, Paxman) conducts interviews with government ministers; the refusal to sanction obfuscation and — you have to say — on occasion downright lying. There are some non-aligned journalists who have a degree of sympathy with Labour’s complaints — John Lloyd, for example. But the majority of those who attack the man are very much aligned indeed, such as Tom Baldwin at the Times, a close friend of Alastair Campbell (who these days is himself a Times journalist, of a sort). Within the Corporation, meanwhile, there are those who feel Mr Humphrys has got a bit above his station — the ludicrous former acting chairman of the governors, Lord Ryder, is one such. And as we have seen, there are others.

This last week the Times devoted two pages to an attack on Mr Humphrys, based on comments he is alleged to have made during a light-hearted address to a bunch of public relations executives aboard a cruise ship moored off the coast at Southampton. Short of being stuck in the New Orleans Superdome, I cannot imagine a much worse fate than to be imprisoned on a luxury Narrenschiff with 200 or so bibulous PR monkeys — one hopes Mr Humphrys was well paid for enduring such an appalling ordeal. Anyway, during the course of his unscripted address, the presenter suggested that Gordon Brown tended to come across as a little boring when being interviewed, that John Prescott made people laugh and that politicians who refused to lie would find it difficult to achieve Cabinet status. He also suggested that Andrew Gilligan had been almost entirely correct that the government had ‘sexed up’ intelligence reports about Saddam Hussein’s weapons of mass destruction. I suppose you might consider the first three statements a matter of conjecture, but the last is a simple fact.

Tom Baldwin, naturally, was the conduit for the report, which stuck the boot in not only over the remarks I have quoted above but also over the fact that — heaven forfend — Mr Humphrys used a couple of rude words during his address. Mr Baldwin said rather coyly that the Times had ‘obtained’ a copy of a video made of the speech; in fact it had been passed on to Mr Baldwin by his old mucker Tim Allan, a former No. 10 spin doctor who now runs his own PR firm (but was not on board ship for the speech). Earlier this year Mr Allan was contemplating a return to New Labour spin-doctoring but, in the end, decided against it. Mr Allan’s company, Portland PR, handles an account for a certain Rupert Murdoch and he has been espied within these pages writing articles calling for the privatisation of the BBC. By now you should have an idea of the general agenda and the twin motives of political animosity and commercial gain.

Communications Directors, the firm which hired Mr Humphrys, insists that Tim Allan got his video under false pretences, lied through his teeth to members of its staff and broke a confidentiality agreement by passing the video on to Mr Baldwin. Mr Allan — who may now face legal action as a result — denies these allegations. ‘I have nothing to apologise for,’ he told me. ‘John Humphrys is paid thousands of pounds by the BBC and he runs around the country saying that politicians are lying shits,’ he added, although these were not quite the words used by Mr Humphrys. In any case, I’m not sure what the implication is here; certainly not conflict of interest. If the BBC paid him thousands of pounds and he ran around the country saying that politicians were lovely, would that be OK? One could even argue that Mr Humphrys’s comments were a form of public transparency, albeit a well-remunerated one. But this much is true: John Humphrys is one of the very few presenters whose political allegiance I cannot remotely fathom, despite having known the man as a friend for the best part of 15 years. Elsewhere there are presenters who use the word ‘we’ when referring to New Labour and plenty of others who betray their political leanings (almost exclusively towards the Left) in every loaded question, every sneer and every nuance.

The Times seems now to have disowned Mr Baldwin’s article. In an editorial on Monday it announced that Mr Humphrys’s comments should not be taken seriously and we should simply ‘chuckle’ and move on. Which is a peculiar thing to say about a story to which your newspaper has devoted two whole pages, but there we are. But the Times is in concordance with the rest of Fleet Street, Right and Left — there was no harm in Mr Humphrys’s remarks. And yet the BBC, or some of its management pygmies, has now seen fit publicly to rebuke the man.

It is worth remembering that it was Mr Baldwin who was the lucky recipient of the tape-recording which did for the Conservative MP Howard Flight, shortly before the last election. Mr Flight had been surreptitiously recorded suggesting that tax cuts were not a wholly bad thing and, when Mr Baldwin’s story hit the news-stands, Mr Flight was (illegally, I suspect) deselected on the orders of his party leader, Michael Howard. Mr Flight told me: ‘Tom Baldwin wrote the story; he got the recording. The Labour party did not deny that it had been the source of the tape at the time.’ Indeed, the Labour party put out a statement saying that Howard Flight had been sacked for telling the truth. How’s that for hypocrisy?

It is becoming a familiar mode of attack and one which is entirely fitting for New Labour: hang people when they are revealed to have spoken what they believe to be the truth. Sneak around and get friendly journalists to do your dirty work for you. There are certainly enough journalists willing to do it, although few have been quite so reliable, over the years, as Mr Baldwin.

Meanwhile the BBC, still in its postHutton trauma, has reacted with a predictable lack of spine. Both the chairman of the BBC, Michael Grade, and the editor of the Today programme, Kevin Marsh, have demanded to see a ‘full transcript’ of Mr Humphrys’s address. And having done so, they’ve come to exactly the opposite conclusion to the rest of the journalistic world. Is the BBC really so insecure that it needs to make such obeisance to the government?

You assume that with this sort of response, one of these days New Labour will get its wish and Mr Humphrys will be sacked. And we’ll be left listening to presenters who are on altogether more convivial terms with the ministers whom they are interviewing.