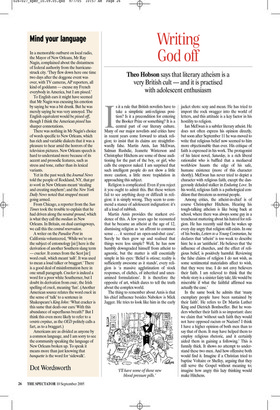 In a memorable outburst on local radio, the Mayor of New Orleans, Mr Ray Nagin, complained about the distantness of federal authority from the hurricanestruck city. ‘They flew down here one time two days after the doggone event was over, with TV cameras, AP reporters, all kind of goddamn — excuse my French everybody in America, but I am pissed.’ To English ears it might have seemed that Mr Nagin was excusing his emotion by saying he was a bit drunk. But he was merely saying he was very annoyed. The English equivalent would be pissed off, though I think the American pissed has sharper connotations.

There was nothing in Mr Nagin’s choice of words specific to New Orleans, which has rich and variable dialects that it was a pleasure to hear amid the horrors of the television pictures. New Orleans speech is hard to understand more because of its accent and prosodic features, such as stress and tone, rather than its lexical variants.

Yet in the past week the Journal News told the people of Rockland, NY, that get to work in New Orleans meant ‘stealing and creating mayhem’; and the New York Daily News noted that strapped meant going armed.

From Chicago, a reporter from the Sun Times took the trouble to explain that he had driven along the neutral ground, which is what they call the median in New Orleans. In Britain, on dual carriageways, we call this the central reservation.

A writer on the Paradise Post in California volunteered, ‘While we’re on the subject of entomology [sic] here is the derivation of another Southern slang term — cracker. It comes from the Scot [sic] word craik, which meant ‘talk’. It was used to mean a loud talker or braggart.’ There is a good deal of misinformation here in one small paragraph. Cracker is indeed a word for a poor white Southerner, but I doubt its derivation from craic, the Irish spelling of crack, meaning ‘fun’. (Another American source relates the word crack in the sense of ‘talk’ to a sentence in Shakespeare’s King John: ‘What cracker is this same that deafs our ears/ With this abundance of superfluous breath?’ But I think this even more likely to refer to a ventris crepitus, as the OED politely calls a fart, as to a braggart.) Americans are as divided as anyone by a common language, and I am sorry to see the community speaking the language of New Orleans broken up. To speak it means more than just knowing that banquette is the word for ‘sidewalk’.