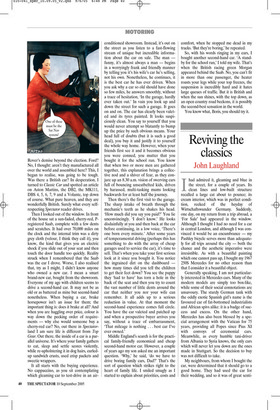 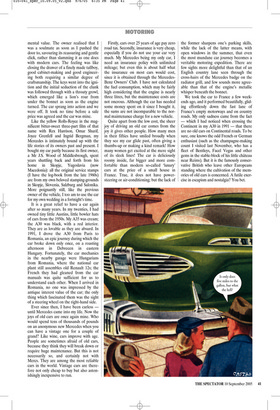 Ihad admired it, gleaming and blue in the street, for a couple of years. Its clean lines and low-built structure recalled a large cat about to pounce; its cream interior, which was in perfect condition, reeked of the heyday of Wirtschaftswunder Germany. Suddenly, one day, on my return from a trip abroad, a ‘For Sale’ had appeared in the window. Although I thought I had no need for a car in central London, and although I was convinced it would be an encumbrance — my Pashley bicycle serves more than adequately for all trips around the city — both the chance and the aesthetic imperative were irresistible. As with a beautiful painting which one cannot pass up, I bought my 1967 250S Mercedes for no other reason than that I consider it a beautiful object.

Generally speaking, I am not particularly interested in Mercedes cars. Many of the modern models are simply too box-like, while some of their social connotations are unsavoury. The sturdy German tank with the oddly exotic Spanish girl’s name is the favoured car of fat-bottomed industrialists and African spivs alike: it is a badge of success and excess. On the other hand, Mercedes has also been blessed by a special arrangement with the Vatican for 75 years, providing all Popes since Pius XI with convoys of ceremonial cars. Meanwhile, as every humble taxi-driver from Albania to Syria knows, the only cars which will never let you down are the ones made in Stuttgart. So the decision to buy was not difficult to take.

My neighbours, from whom I bought the car, were determined that it should go to a good home. They had used the car for their wedding, and so it was of great senti mental value. The owner realised that I was a soulmate as soon as I pushed the door to, savouring its reassuring and gentle click, rather than slamming it as one does with modern cars. The feeling was like closing the drawer of a finely made tallboy, good cabinet-making and good engineering both requiring a similar degree of craftsmanship. The keys went into the ignition and the initial seduction of the clunk was followed through with a throaty growl, which emerged like a lion’s roar from under the bonnet as soon as the engine turned. The car sprang into action and we were off. It took no time before a sale price was agreed and the car was mine.

Like the yellow Rolls-Royce in the magnificent bitter-sweet three-part film of that name with Rex Harrison, Omar Sharif, Joyce Grenfell and Ingrid Bergman, my Mercedes is intimately bound up with the life stories of its owners past and present. I bought my car partly because its first owner, a Mr J.S. Wood of Middlesbrough, spent years shuttling back and forth from his home in Skopje, Yugoslavia (now Macedonia): all the original service stamps (I have the log-book from the late 1960s) are from my own beloved stamping-grounds in Skopje, Slovenia, Salzburg and Salonika. More poignantly still, like the previous owner of the vehicle, I too am to use the car for my own wedding in a fortnight’s time.

It is a great relief to have a car again after so many years. In my twenties, I had owned tiny little Austins, little bowler hats of cars from the 1950s. My A35 was cream; the A30 was black, with a red interior. They are as lovable as they are absurd. In 1991, I drove the A30 from Paris to Romania, an epic journey during which the car broke down only once, on a roasting afternoon in Debrecen in eastern Hungary. Fortunately, the car mechanics in the nearby garage were Hungarians from Romania, where the national car plant still assembles old Renault 12s; the French they had gleaned from the car manuals was quite sufficient for us to understand each other. When I arrived in Romania, no one was impressed by the antique interest value of the car; the only thing which fascinated them was the sight of a steering wheel on the right-hand side.

Ever since then, I have been carless until Mercedes came into my life. Now the joys of old cars are once again mine. Who would spend tens of thousands of pounds on an anonymous new Mercedes when you can have a vintage one for a couple of grand? Like wine, cars improve with age. People are sometimes afraid of old cars, because they think they will break down or require huge maintenance. But this is not necessarily so, and certainly not with Mercs. They are among the most reliable cars in the world. Vintage cars are therefore not only cheap to buy but also astonishingly inexpensive to run. Firstly, cars over 25 years of age pay zero road tax. Secondly, insurance is very cheap, especially if you do not use your car very much. My Mercedes being my only car, I need an insurance policy with unlimited mileage; but even this is about half what the insurance on most cars would cost, since it is obtained through the MercedesBenz Owners’ Club. I have not calculated the fuel consumption, which may be fairly high considering that the engine is nearly three litres, but the maintenance costs are not onerous. Although the car has needed some money spent on it since I bought it, the sums are not incomparable to the normal maintenance charge for a new vehicle.

Quite apart from the low cost, the sheer joy of driving an old car comes from the joy it gives other people. How many men in their fifties have smiled broadly when they see my car glide past, often giving a thumbs-up or making a kind remark! How many women get excited at the mere sight of its sleek lines! The car is deliciously roomy inside, far bigger and more comfortable than modern so-called ‘luxury’ cars at the price of a small house in France. True, it does not have powersteering or air-conditioning; but the lack of the former sharpens one’s parking skills, while the lack of the latter means, with open windows in the summer, that even the most mundane car journey becomes a veritable motoring expedition. There are few sights more delightful than that of an English country lane seen through the cross-hairs of the Mercedes badge on the radiator grill, and few sounds more agreeable than that of the engine’s metallic whisper beneath the bonnet.

We took the car to France a few weekends ago, and it performed beautifully, gliding effortlessly down the fast lane of France’s empty motorways and on country roads. My only sadness came from the fact — which I had noticed when crossing the Continent in my A30 in 1991 — that there are no old cars on Continental roads. To be sure, one knows the odd French or German enthusiast (such as the champagne-making count I visited last November, who has a fleet of Bentleys, Facel Vegas and other gems in the stable-block of his little château near Reims). But it is the famously conservative British who leave other Europeans standing where the cultivation of the memories of old cars is concerned. A futile exercise in escapism and nostalgia? You bet.