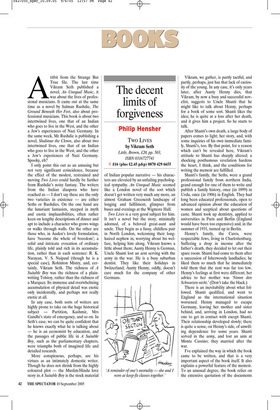 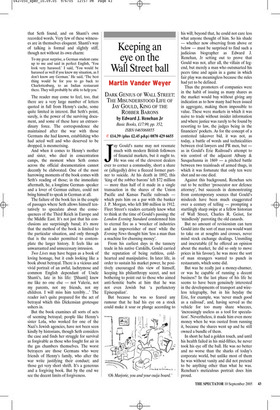 The decent limits of forgiveness

I only point this out as an amusing but not very significant coincidence, because the effect of the modest, restrained and moving Two Lives could hardly be further from Rushdie’s noisy fantasy. The writers from the Indian diaspora who have reached us — I don’t say these are the only two varieties in existence — are either Seths or Rushdies. On the one hand are the luxuriant fantasists, steeped in myth and exotic implausibilities, often rather keen on lengthy descriptions of dinner and apt to include a character who grows wings or walks through walls. On the other are those who, in Auden’s lovely formulation, have ‘become the whole of boredom’; a solid and intricate evocation of ordinary life, plainly told and rich in its accumulation, rather than in each sentence: R. K. Narayan, V. S. Naipaul (though he is a special case), Rohinton Mistry, and, certainly, Vikram Seth. The richness of A Suitable Boy was the richness of a plainwriting Tolstoy, rather than the richness of a Marquez. Its immense and overwhelming accumulation of physical detail was exotic only incidentally, and perhaps not really exotic at all.

In any case, both sorts of writers are highly prone to take on the huge historical subject — Partition, Kashmir, Mrs Gandhi’s state of emergency, and so on. In Seth’s case, we can be quite confident that he knows exactly what he is talking about — he is an economist by education, and the passages of public life in A Suitable Boy, such as the parliamentary chapters, were triumphs both of imagined life and detailed research.

More conspicuous, perhaps, are his virtues as an intimately domestic writer. Though he does not shrink from the highly coloured plot — the Muslim/Hindu love story in A Suitable Boy is the stock material of Indian popular narrative — his characters are elevated by an unfailing psychological sympathy. An Unequal Music seemed like a London novel of the sort which doesn’t get written very much any more, an almost Graham Greeneish landscape of longing and fulfilment, glimpses from buses and evenings at the Wigmore Hall.

Two Lives is a very good subject for him. It isn’t a novel but the story, minimally adorned, of a beloved great-aunt and uncle. They begin as a fussy, childless pair in North London, welcoming their longhaired nephew in, worrying about his welfare, helping him along. Vikram knows a little about them; Aunty Henny is German, Uncle Shanti lost an arm serving with the army in the war. He is a busy suburban dentist. They like their holidays in Switzerland; Aunty Henny, oddly, doesn’t care much for the company of other Germans. Vikram, we gather, is partly tactful, and partly, perhaps, just has that lack of curiosity of the young. In any case, it’s only years later, after Aunty Henny dies, that Vikram, by now a busy and successful novelist, suggests to Uncle Shanti that he might like to talk about Henny, perhaps for a book of some sort. Shanti likes the idea; he is quite at a loss after her death, and it gives him a project. So he starts to talk.

After Shanti’s own death, a large body of papers comes to light; her story, and, with some inquiries of his own immediate family, Shanti’s, too. By that point, for a reason which can’t be revealed here, Vikram’s attitude to Shanti has sharply altered; a shocking posthumous revelation hardens the heart, I think, and the conditions for writing the memoir are fulfilled.

Shanti’s family, the Seths, were a grand professional family from northern India, grand enough for one of them to write and publish a family history, once (in 1899) in Urdu, once (in 1906) in English. They had long been educated professionals, open to advanced opinion about the education of women and sceptical about questions of caste. Shanti took up dentistry, applied to universities in Paris and Berlin (England would have been too expensive) and, in the summer of 1931, turned up in Berlin.

Henny’s family, the Caros, were respectable Jews, living in Charlottenburg. Suffering a drop in income after the father’s death, they decided to let out their spare room. Shanti had come to them after a succession of Isherwoody landladies; he liked them so much that he immediately told them that the rent was far too low. Henny’s feelings at first were different; her advice to her mother was ‘Nimm den Schwarzen nicht.’ (Don’t take the black.) There is an inevitability about what followed. Shanti qualified, and went to England as the international situation worsened. Henny managed to escape Germany, leaving her mother and sister behind, and, arriving in London, had no one to get in contact with except Shanti. Their relationship developed slowly; there is quite a sense, on Henny’s side, of unwilling dependence for some years. Shanti served in the army, and lost an arm at Monte Cassino; they married after the war.

I’ve explained the way in which the book came to be written, and that is a very important aspect of the book itself. It also explains a powerful feature of the memoir. To an unusual degree, the book relies on the extensive quotation of the documents that Seth found, and on Shanti’s own recorded words. Very few of these witnesses are in themselves eloquent. Shanti’s way of talking is formal and slightly stiff, though not without its own charm:

To my great surprise, a German student came up to me and said in perfect English, ‘You look very harassed.’ I said, ‘You would be harassed as well if you knew my situation, as I don’t know any German.’ He said, ‘The best thing would be for you to go back to Charlottenburg, to an Indian restaurant there. They will probably be able to help you.’

The reader may come to feel, too, that there are a very large number of letters quoted in full from Henny’s cache, some quite limited in interest. But Seth’s point, surely, is the power of the surviving document, and some of these have an extraordinary force. The correspondence she maintained after the war with those Germans she had known, establishing who had acted well and who deserved to be dropped, is mesmerising.

And when it comes to Henny’s mother and sister, who died in concentration camps, the moment when Seth comes across the official documentation cannot decently be elaborated. One of the most harrowing moments of the book comes with Seth’s reading of those; in the immediate aftermath, he, a longtime Germanspeaker and a lover of German culture, could not bring himself to speak in German at all.

The failure of the book lies in the couple of passages where Seth allows himself tentatively to speculate about the consequences of the Third Reich in Europe and the Middle East. It’s not just that his conclusions are surprisingly banal; it’s more that the method of the book is limited to the particular situation, and only through that is the reader permitted to contemplate the larger history. It feels like an unwarranted and unnecessary intrusion.

Two Lives may have begun as a book of loving homage, but it ends looking like a book about betrayal. There is a vicious and vivid portrait of an awful, lachrymose and common English dependant of Uncle Shanti’s, late in his life: ‘[Shanti] knew me like no one else — not Valerie, not my parents, not my friends, not my children. I will miss him terribly...’ The reader isn’t quite prepared for the act of betrayal which this Dickensian grotesque ushers in.

But the book examines all sorts of acts of seeming betrayal; people like Henny’s sister Lola, who worked for one of the Nazi’s Jewish agencies, have not been seen kindly by historians, though Seth considers the case and finds her struggle for survival as forgivable as those who fought for air in the gas chambers themselves. The worst betrayers are those Germans who were friends of Henny’s family, who after the war write justifying their conduct; and those get very short shrift. It’s a generous and a forgiving book. But by the end we see the decent limits of forgiveness.