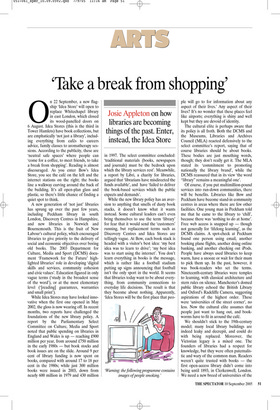 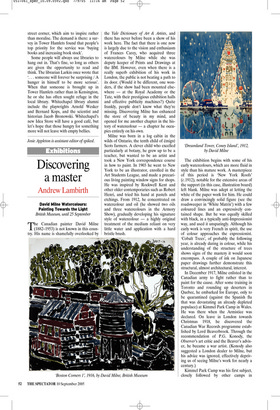 ‘Take a break from shopping’

Josie Appleton on how libraries are becoming things of the past. Enter, instead, the Idea Store

On 22 September, a new flagship ‘Idea Store’ will open to replace Whitechapel library in east London, which closed its wood-panelled doors on 6 August. Idea Stores (this is the third in Tower Hamlets) have book collections, but are emphatically ‘not just a library’, including everything from cafés to careers advice, family classes to aromatherapy sessions. According to the publicity, these are ‘neutral safe spaces’ where people can ‘come for a coffee, to meet friends, to take a break from shopping’. Reading is almost discouraged. As you enter Bow’s Idea Store, you see the café on the left and the internet stations on the right; the books line a walkway curving around the back of the building. It’s all open-plan glass and plastic, so there’s little chance of finding a quiet spot to think.

A new generation of ‘not just’ libraries has sprung up over the past few years, including Peckham library in south London, Discovery Centres in Hampshire, and new libraries in Norwich and Bournemouth. This is the fruit of New Labour’s cultural policy, which encouraged libraries to give priority to the delivery of social and economic objectives over boring old books. The 2003 Department for Culture, Media and Sport (DCMS) document ‘Framework for the Future’ highlighted libraries’ role in developing ‘digital skills and services, community cohesion and civic values’. Education figured in only vague terms (‘study in the broadest sense of the word’), or at the most elementary level (‘[reading] guarantees, warranties and small print’).

While Idea Stores may have looked innovative when the first one opened in May 2002, the gloss is now wearing off. In recent months, two reports have challenged the foundations of the new library policy. A report by the Parliamentary Select Committee on Culture, Media and Sport noted that public spending on libraries in England and Wales is up — reaching £900 million per year, from around £750 million in the early 1980s — but book stocks and book issues are on the slide. Around 9 per cent of library funding is now spent on books, compared with around 17 to 18 per cent in the 1980s; while just 300 million books were issued in 2003, down from nearly 600 million in 1979 and 430 million in 1997. The select committee concluded: ‘traditional materials (books, newspapers and journals) must be the bedrock upon which the library services rest’. Meanwhile, a report by Libri, a charity for libraries, argued that ‘librarians have misdirected the funds available’, and have ‘failed to deliver the book-based services which the public expects and demands’.

While the new library policy has an aversion to anything that smells of dusty book stacks, it doesn’t know what it wants instead. Some cultural leaders can’t even bring themselves to use the term ‘library’ for fear that it would send the ‘customers’ running, but replacement terms such as Discovery Centres and Idea Stores are tellingly vague. At Bow, each book stack is headed with a visitor’s best idea: ‘my best idea was to learn to drive’; ‘my best idea was to start using the internet’. You don’t learn everything in books is the message, which is rather like a football stadium putting up signs announcing that football isn’t the only sport in the world. It seems that libraries today want to be about everything, from community connections to everyday life decisions. The result is that they become about nothing. Apparently, ‘Idea Stores will be the first place that peo ple will go to for information about any aspect of their lives.’ Any aspect of their lives? It’s no wonder that these places feel like airports; everything is shiny and well kept but they are devoid of identity.

The cultural elite is perhaps aware that its policy is all froth. Both the DCMS and the Museums, Libraries and Archives Council (MLA) reacted defensively to the select committee’s report, saying that of course libraries should be about books. These bodies are just mouthing words, though; they don’t really get it. The MLA stated its ‘commitment to promoting nationally the library brand’, while the DCMS reassured that in its view ‘the word “library” remains a meaningful one’.

Of course, if you put multimillion-pound services into run-down communities, there will be benefits. Libraries like Bow and Peckham have become stand-in community centres in areas where there are few other facilities. One young man in Peckham told me that he came to the library to ‘chill’, because there was ‘nothing to do at home’. Free web access is snapped up — though not generally for ‘lifelong learning’, as the DCMS claims. A spot-check at Peckham found one person using email, another booking plane flights, another doing online banking, and another checking out iPods. People have always used libraries to keep warm, have a snooze or wait for their mum to pick them up. In the past, however, it was book-readers who set the terms. Nineteenth-century libraries were temples to learning, with classical architecture and stern rules on silence. Manchester’s domed public library echoed the British Library and Oxford’s Radcliffe Camera, suggesting aspirations of the highest order. These were ‘universities of the street corner’, no less. Now the cultural elite assumes that people just want to hang out, and bookworms have to fit in around the café.

We shouldn’t stick to the 19th-century model; many local library buildings are indeed leaky and decrepit, and could do with being replaced. Moreover, the Victorian legacy is a mixed one. The founders of libraries had a respect for knowledge, but they were often paternalistic and wary of the common man. Readers weren’t quite trusted with books — the first open-access library didn’t come into being until 1893, in Clerkenwell, London. We need a new breed of universities of the street corner, which aim to inspire rather than moralise. The demand is there: a survey in Tower Hamlets found that people’s top priority for the service was ‘buying books and increasing book stock’.

Some people will always use libraries to hang out in. That’s fine, so long as others are given the opportunity to read and think. The librarian Larkin once wrote that ‘... someone will forever be surprising / A hunger in himself to be more serious’. When that someone is brought up in Tower Hamlets rather than in Kensington, he or she has often sought refuge in the local library. Whitechapel library alumni include the playwrights Arnold Wesker and Bernard Kops, and the scientist and historian Jacob Bronowski. Whitechapel’s new Idea Store will have a good café, but let’s hope that those hungry for something more will not leave with empty bellies.