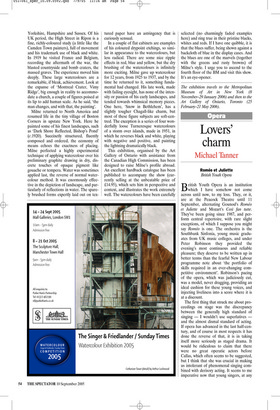 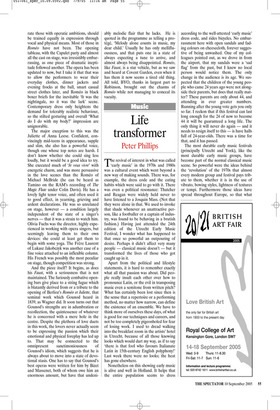 Roméo et Juliette British Youth Opera British Youth Opera is an institution which I have somehow not come across until now, to my loss. They, or it, are at the Peacock Theatre until 11 September, alternating Gounod’s Roméo et Juliette and Mozart’s Così fan tutte. They’ve been going since 1987, and perform central repertoire, with rare slight exceptions, of which I suppose you might say Roméo is one. The orchestra is the Southbank Sinfonia, young music graduates from UK music colleges, and under Peter Robinson they provided the evening’s most continuous and reliable pleasure; they deserve to be written up in better terms than the fearful New Labour programme note about ‘the portfolio of skills required in an ever-changing competitive environment’. Robinson’s pacing of the opera, which was judiciously cut, was a model, never dragging, providing an ideal cushion for these young voices, and injecting liveliness into a score where it is at a discount.

The first thing that struck me about proceedings on stage was the discrepancy between the generally high standard of singing — I wouldn’t use superlatives and the almost dismal standard of acting. If opera has advanced in the last half-century, and of course in most respects it has done the reverse of that, it is in taking itself more seriously as staged drama. It would be ridiculous to claim that there were no great operatic actors before Callas, which often seems to be suggested, but I think that she was crucial in making us intolerant of phenomenal singing combined with derisory acting. It seems to me imperative now that young singers, at any rate those with operatic ambitions, should be trained equally in expression through vocal and physical means. Most of those in Roméo have not been. The opening tableau, with the Capulet party and almost all the cast on stage, was irresistibly embarrassing, as one piece of dramatic ineptitude followed another. The opera has been updated to now, but I take it that that was to allow the performers to wear their everyday clothes, dinner jackets and evening frocks at the ball, smart casual street clothes later, and Roméo in black boxer briefs for the inevitable ‘It was the nightingale, no it was the lark’ scene. Contemporary dress only heightens the demand for tolerably realistic behaviour, so the stilted gesturing and overall ‘What do I do with my body?’ impression are unignorable.

The major exception to this was the Juliette of Anna Leese. Confident, convincingly mid-teens in appearance, supple and slim, she also has a powerful voice, though one whose top notes are harsh. I don’t know whether she could sing less loudly, but it would be a good idea to try. She executed much of ‘Je veux vivre’ with energetic charm, and was more persuasive in the love scenes than the Roméo of Michael McBride (he can be heard as Tamino on the RAM’s recording of The Magic Flute under Colin Davis). He has a lovely light tenor voice, and often used it to good effect, in yearning, grieving and ardent declarations. He was so unrelaxed on stage, however — a condition largely independent of the state of a singer’s nerves — that it was a strain to watch him. Olivia Fuchs was the director, highly experienced in working with opera singers, but seemingly leaving them to their own devices: she could at least get them to begin with some yoga. The Frère Laurent of Lukasz Jakobczyk was another case of a fine voice attached to an inflexible column. His French was possibly the most peculiar on stage, though competition was strong.

And the piece itself? It begins, as does his Faust, with a seriousness that is not maintained. The furiously combative opening bars give place to a string fugue which is blatantly derived from or a tribute to the opening of Berlioz’s Roméo et Juliette, that seminal work which Gounod heard in 1839, as Wagner did. It soon turns out that Gounod’s strengths are in adumbration or recollection, the quintessence of whatever he is concerned with a mere hole in the centre. Despite the plethora of love duets in this work, the lovers never actually seem to be expressing the passion which their emotional and physical foreplay has led up to. That may be connected to the omnipresent sanctimoniousness of Gounod’s idiom, which suggests that he is always about to move into a state of devotional stasis. One has to say that Gounod’s best operas were written for him by Bizet and Massenet, both of whom owe him an enormous amount, but have that undeni ably melodic flair that he lacks. He is quoted in the programme as telling a protégé, ‘Melody alone counts in music, my dear child.’ Usually he has only mellifluousness, and that puts one in a state of always expecting a tune to arrive, and almost always being disappointed. Roméo, like Faust, is a star vehicle, but as we saw and heard at Covent Garden, even when it has them it now seems a tired old thing. All told, BYO, thanks in largest part to Robinson, brought out the charms of Roméo while not managing to conceal its vacuity.