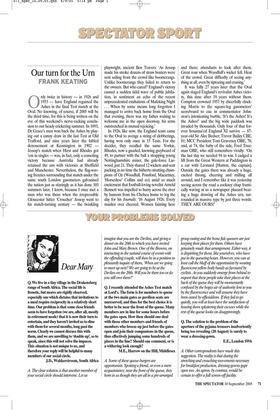 Q. We live in a tiny village in the Drakensberg range of South Africa. The social life is frenetic, but mores are rigidly observed, especially one which dictates that invitations to a meal require reciprocity in a relatively short time. Our problem is that some close friends seem to have forgotten (we are, after all, mostly in retirement mode) that it is now their turn to entertain, and they haven’t invited us to dine with them for several months, long past the norm. Clearly we cannot discuss this with them, and we are unwilling to ‘double up’, so to speak, since this will not solve the impasse. This situation is not unique to us, and therefore your reply will be helpful to many members of our social circle.

J.D., Wakkerstroom, South Africa A. The clear solution is that another member of your social circle should intervene. Let us imagine that you are the Devlins, and giving a dinner on the 20th to which you have invited John and Mary Brown. One of the Browns, on interacting in the natural course of events with the offending couple, will then be in a position to pleasantly inquire of them, ‘When are we going to meet up next? We are going to be at the Devlins on the 20th. Will you be there too or do you still owe them?’ Q. I recently attended the Ashes Test match at Lord’s. The form is for members to queue at the two main gates as pavilion seats are unreserved, and thus for the best choice it is better to be near the front of the queue. Many members are in line for some hours before the gates open. How then should one deal with those other members and friends of members who breeze up just before the gates open and join their companions in the queue, thus effectively jumping some hundreds of places in the line? Should one comment, or is a withering look enough?

M.E., Harrow on the Hill, Middlesex A. Some of these queue-bargers are opportunists. Spotting a friend, or even a mere acquaintance, near the front of the queue, they horn in as though they are all in a pre-arranged group outing and the bona fide queuers are just keeping their places for them. Others have genuinely made that arrangement. Either way, it is dispiriting for those, like yourselves, who have put in the queueing hours. However, you can at least call the bluff of the opportunists by wearing fluorescent yellow body bands as favoured by cyclists. As you suddenly emerge from behind to request that these people take their places at the back of the queue they will be momentarily confused by the bogus air of authority lent to you by the fluorescence and will assume they have been outed by officialdom. If they fail to go quietly, you will at least have the satisfaction of hearing them spluttering their excuses while the rest of the queue looks on disapprovingly.

Q. The solution to the problem of the aperture of the pyjama trousers inadvertently being too revealing (20 August) is surely to wear a dressing-gown.

E.E., London SW6 A. Other correspondents have made this suggestion. The reality is that during the stretching and crouching movements necessary for breakfast production, dressing-gowns gape open too. An apron, by contrast, would be certain to offer a full screen-off facility.